Do you remember the Rock, Scissors, and Paper game from when you were little? Here’s how it works: There are two players. Each player selects rock, scissors, or paper. Then the two players simultaneously “show” the other their selection.

If both players have selected the same thing, it’s a tie. Otherwise, the winner is determined as follows:

In our case, one of the players is the computer, and the other is the user of the computer program. The user will make a choice between rock, scissors, and paper. The computer’s choice will be made at random.

Here are the steps we’ll need to build into this program to make the game work:

Figure 3-5 shows these steps in a simple flow chart —a diagram intended to show the “flow” of execution of statements in a computer program. The flow chart shown in Figure 3-5 is high level, meaning that it doesn’t “drill down” to the level of individual conditional statements. In many circumstances, it may be a helpful part of planning a program to create a flow chart that’s more detailed than this one. 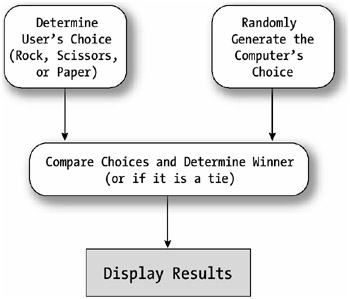 Figure 3-5: A high-level flow chart of the Rock, Scissors, and Paper game

I’ll show you each of these steps in detail, but before we get there, we need to discuss a few preliminary programming concepts that I haven’t explained yet.

You’ll need to know how to interact in a simple fashion with HTML form elements and the events fired by an element (Chapter 8, “ Understanding Events and Event-Driven Programming,” discusses these things). You’ve already seen in the age check example (Listing 3-3) that you can add code to the onClick event of a form button. The Rock, Scissors, and Paper example uses a similar mechanism to start a play of the game.

In addition, HTML form elements can be referred to by name in JavaScript code. We’ll need to know what the user selected—rock, scissors, or paper—which the user sets using option buttons (also referred to as radio buttons).

These are HTML <INPUT> elements of type=radio.

In JavaScript code, the value stored in a radio button—a Boolean true if it has been selected and a Boolean false if it hasn’t—can be evaluated using the following construction:

will evaluate to true, and if the radio button hasn’t been selected, the expression is false.

Chapter 6, “ Programming with Arrays,” fully explains arrays. In the meantime, you need to know that an array stores values that are of the same type, and they can be accessed using an index.

The index is notated using square brackets. In JavaScript it starts at zero (not as you might expect at one).

So whether (or not) the three radio buttons on the HTML form— one representing the user choice of rock, the next scissors, and the final one paper—are checked can be determined by Boolean evaluation of the expressions:

You may be curious to know why I used an array to name these buttons. If they’re named this way, the browser knows the radio buttons are related—and only one can be selected (checked) at a time.

A function is a piece of JavaScript code—in other words, a series of statements—that’s defined once in a program but can be executed many times. Functions (which are explained in detail in Chapter 5, “ Understanding Functions ”) can be passed values, also called parameters, to operate on, and they can return a value.

In the Rock, Scissors, and Paper application, functions are used to clarify the organization of the program—and to provide a mechanism so that the program code need not be assigned as a single string to the onClick event.

Listing 3-3 in contrast shows an example of assigning the entire program code as a quoted string to an onClick event. You can readily see why this would get out of hand (and be hard to read) if there were more than one or two lines of code.

The JavaScript Math object makes available a number of mathematical constants and functions. The Rock, Scissors, and Paper application uses the Random function of the Math object—which returns a pseudorandom number between zero and one.

I say “pseudorandom” because this number isn’t really random if you’re going to be picky—but it’s certainly random enough for playing a game of Rock, Scissors, and Paper.

There’s nothing wrong with flipping ahead if you’d like to learn more about these things and then coming back!

But it’s not necessary to flip ahead. Now that you have been introduced to the preliminaries, we’re ready to forge full speed ahead with Rock, Scissors, and Paper.

The first thing we’re going to do is build the user interface—or computer screen such as the Web page in which the user enters a choice and starts a play of the game—for Rock, Scissors, and Paper.

The user interface, as you can see in Listing 3-5, is almost entirely HTML (as opposed to JavaScript).

The HTML shown in Listing 3-5 creates the Web page shown in Figure 3-6. 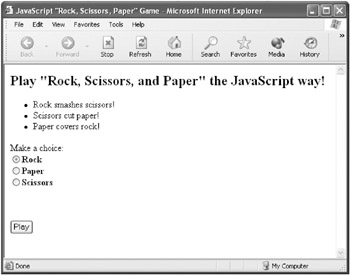 If you look at the HTML that makes up the Web page, you’ll see that there only a few things you need to know from the viewpoint of the JavaScript program. First, the HTML form has a name— gameForm — that we’ll need in order to refer to input elements on the form.

Second, the three radio button input elements are all named game and can be referred to using array notation, as I explained a little while ago.

You can tell from this that program execution passes immediately to the shakeIt function when the user starts a round of the game.

Understanding the Organization of the Code

The function shakeIt is named to suggest the shaking of dice. It performs the following tasks:

The function whoWon determines the winner and passes back an appropriate message to complete the message box display initiated by shakeIt.

Listing 3-6 shows the general structure used for code placement in the Rock, Scissors, and Paper application.

Listing 3.6: Placement of Code in Rock, Scissors, and Paper

Generating a Choice for the Computer

The first thing that the shakeIt function does is to obtain a random number between zero and one using the Math object’s random number generator that I talked about a little while ago:

Next, a choice of rock, scissors, or paper is assigned to the computer using if statements and the random number:

To determine the user’s choice, the program uses another series of if statements—combined with the array notation I explained earlier:

The last line in the shakeIt function does a couple of things at the same time:

The alert keyword tells the computer to display a message box. The string that will be displayed in the message box starts with the value of the choice randomly selected for the computer, computerPlay, followed by the user’s selection, personPlay. Next, the whoWon function is called with both values.

The function whoWon first checks to see if the two plays are the same, in which case the game is a tie. Next, it uses if statements to check each possible computer play (for example, rock). If the computer played rock, then the human user loses if the user selected scissors—and wins otherwise.

Each possible combination is checked using conditional statements, and the results are passed back to the shakeIt function as a string using the return keyword.

It’s time to have some fun and play Rock, Scissors, and Paper against the computer. The computer, of course, is on the honor system.