In Chapter 1, we described how visual modeling tools are more than simply drawing tools. As well as enabling you to draw pictures, such tools have an understanding of what those pictures actually mean. Visio for Enterprise Architects marked a transition from Visio as a drawing tool to Visio as a (UML) modeling tool, yet it fell short of the capabilities offered by contemporary UML tools by not providing support for the following:

Class Designer supports both code synchronization and the capability to visualize .NET Framework classes on diagrams, so we'll discuss that support in this section.

We'll also discuss the following features that you may have encountered in other visual design tools, but for which there is not yet any explicit support in Visual Studio 2005:

Though these are not supported explicitly, we can offer some workarounds to tide you over.

A class diagram can provide a view of your code that shows the types (classes, interfaces, and the like), the type members (fields, properties, etc.), and the relationships between the types (including inheritance and association). Though class diagrams provide views of the code, to the extent that you can have more than one diagram reflecting the same set of classes, those views are fully synchronized with the code, so any changes you make in code are reflected automatically in the diagrams, and vice versa.

If you like, you can try this out again to satisfy yourself that it works, perhaps using the file in our sample solution if you have not built your own. Make a change to the StockDeal class in the source file StockDealClasses.vb and see that change reflected automatically in the two class diagrams showing that class (Figure 5-3 and Figure 5-4). Then make a change to that class on one of the class diagrams to see the change reflected in source code and on the other diagram.

Unlike tools such as IBM Rational XDE, which require you to synchronize manually after each change, or which synchronize automatically on saving a file, Class Designer synchronizes immediately when a change is made. However, note the following proviso: References to types in other projects cannot be displayed in class diagrams until you build the referenced project, and changes to the code of external entities are not reflected until the project is rebuilt. Class Designer does not have the concept of deferred implementation that Application Designer has (see Chapter 2). Each and every change to the model is immediately reflected in code, and each change to the code is immediately reflected in the model. In this way, it can be said that "the code is the model, and the model is the code."

Visual Studio 2005 Class Designer enables the classes from the .NET Framework assemblies or any third-party assemblies to be represented on class diagrams. This can be achieved in various ways.

One way is to right-click a class that inherits from a .NET Framework class or from any other class in a referenced assembly, and then choose Show Base Type from the pop-up menu. The base class will appear on your diagram with an inheritance connector between it and the derived class.

Another way is to right-click a field whose type is that of a .NET Framework class or a third-party referenced class, and then choose Show As Association from the pop-up menu. The type of that field will be shown explicitly on the design surface as a separate class, with an association line between it and the containing class.

A third way of showing .NET Framework classes and other referenced classes on a class diagram is simply to drag those classes from the Class View or the Object Browser onto the design surface. This is the most flexible technique because the classes you choose need not be referenced by existing classes in your design, but their containing assemblies must be referenced by your project.

We've used the word "class" throughout the foregoing discussion for consistency, but rest assured that you can represent other .NET Framework types on class diagrams just as easily — whether they are interfaces, enums, or delegates.

In our introduction to this section, we suggested that patterns support is a desirable feature in a visual design tool, but not supported explicitly as a visual modeling capability of Class Designer. Unlike some earlier visual design tools, Class Designer is fully integrated with the Visual Studio 2005 IDE, and the IDE itself has some patternlike features, including the following:

In other words, Visual Studio 2005 does provide some pattern or patternlike facilities, but they are not directly accessible from Class Designer.

Template wizards cannot currently be initiated from Class Designer, though this capability might be provided in future releases as a mechanism for incorporating patterns into class diagrams. Another possibility is that future releases will allow combinations of classes (representing patterns) to be added to the toolbox as prototypes, to mirror the same functionality provided by Application Designer and Logical Datacenter Designer.

As described earlier, any combination of .NET Framework classes or other classes from referenced assemblies may be shown on the design surface. Therefore, where these represent base classes or interfaces defined by patterns — such as an AbstractFactory class or a State interface — then effectively you can present those patterns in a class diagram.

Certain refactoring types may be applied directly from Class Designer — for example, Implement Abstract Class or Extract Interface. In this respect, Class Designer does indeed support some patternlike features directly.

Because code snippets are inserted within methods, it makes little sense to drive this functionality from a Class Designer that represents method signatures without internal implementations. As an important technique in its own right, the code snippets mechanism is discussed in Chapter 11.

Having surveyed the limited degree of support for patterns provided by Class Designer, we'll now provide some practical examples that show how you could create your own pattern library, at least as a short-term measure until Visual Studio incorporates explicit patterns support.

Building your own pattern library

In this section, we'll show you how to construct a project containing C# implementations of common patterns, with supporting class diagrams. To save on the effort of implementing each pattern yourself, you can find a ready supply of pattern implementations on the web.

For demonstration purposes we took some sample pattern implementations from the Data and Object Factory "Software Design Patterns" at http://www.dofactory.com/patterns/Patterns.aspx. We chose that site mainly because the sample implementations may be used freely as long as the original copyright notices are displayed as shown in the code that follows:

As you may have deduced already, this C# code implements the Gang of Four (GoF) proxy pattern. 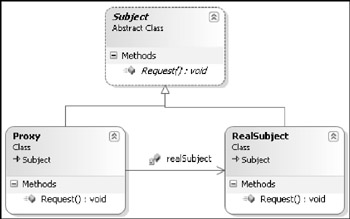 The proxy pattern is important because it underpins many distributed computing technologies, such as Web services and .NET Remoting, not to mention CORBA and Enterprise Java Beans. A remote object (the RealSubject) may need to be represented by a local client-side class (the Proxy) that appears to behave exactly the same because the RealSubject and the Proxy both implement the same interface or abstract class. The sleight of hand is that the Proxy passes on requests to the RealSubject over the network, thus hiding the tricky networking issues from the developer.

When you begin to use this pattern, you'll want to substitute the names of the participating classes with names that are meaningful in the context of the problem you're solving. For example, you might substitute the name Subject with Bank, the name RealSubject with BankImplementation, and the name Proxy with BankProxy. A convenient way to do this is by using the Rename refactoring that is covered in Chapter 11, as it will not only rename that classes themselves but also the references between the classes.

Because Visual Studio 2005 does not support dynamic modeling, we'll now offer some workarounds that you could use to simulate those additional diagram types.

When designing classes using UML, it is possible to create for each (stateful) class a statechart diagram that shows the following:

An example statechart in UML for an Account class is shown in Figure 5-10. 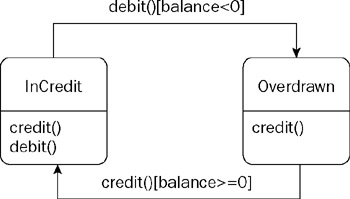 The problem is that, currently at least, the Visual Studio 2005 editions do not provide these statecharts.

It turns out that our discussion of patterns in the previous section provides a workaround here. There is a well-known design pattern for representing an object's possible states as a set of classes. Applying the State pattern to an Account class would result in the class diagram shown in Figure 5-11.

Remember that class diagrams are merely views of the underlying classes, so we can draw as many Class Diagrams as we like showing various combinations of classes. Suppose we draw a new class diagram to show only the Account_InCredit and Account_Overdrawn classes that represent states. By adding some events and associations, we can come up with the diagram shown in Figure 5-12. Are you experiencing any dj vu yet?

Essentially, this diagram contains all of the information contained in the earlier statechart, and it looks very similar too. Events represent events, as they should; and associations represent transitions, which is not unreasonable because you would need a navigable association between the (state) classes in order to make a transition. Because the notation is not quite powerful enough to distinguish events (debit) and conditions (balance<0), we have encoded those semantics into the association role names. That makes sense when you consider that the implementation code for that transition would be something like the following:

It's not ideal, but while we wait for true statecharts to be provided, this technique offers a very feasible workaround, especially if you would manage object states using the recognized State pattern anyway. We've not resorted to using comments, and where we have used specific constructs — such as Events — we've used them exactly for the purpose they are intended.

Taking those two ideas together, in Figure 5-13 we have drawn a participating classes diagram for a "Buy Stock" scenario, and used comments to indicate a numbered sequence of messages that pass between the classes as that scenario plays out. 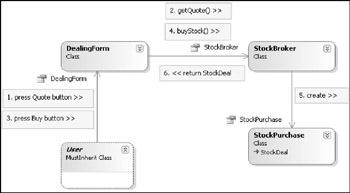 UML purists will point out that collaboration diagrams do not show interactions between classes at all; they show interactions between object instances. Well, our workaround is exactly that, a workaround, so it's not perfect; but in practice we find that the majority of collaboration diagrams are drawn as though they show classes, rather than instances. For those scenarios in which you must distinguish between two instances of the same class — for example, when transferring funds from one bank account to another — you can include an instance name with the message comments in order to set the context.

Consider the following two messages that would appear as two separate comments next to a single association line to an Account class: