The INDEED solution is a cellular-type hybrid line-of-sight link (Figure 16.1, ‘ ).

Their essential characteristics and specifications are:

The photo-detector is a semiconductor PIN-hetero-junction photodiode. The semiconductor is a III-V compound: InGaAs/InP. The active area is 0.2 mm 2 (Figure 16.5). 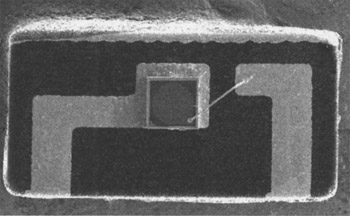 Typically, a concentrator [Kahn, 1997; Street, 1997] is used, with a 1550 nm selective filter. The presence of a lens (light energy concentrator) justifies itself especially in directive systems where the concentration bonus is inversely proportional to numerical aperture of receiver (FOV-Rx) [Street, 1997]. As diffuse systems, the gain in power can however reach 3 dB with sources approaching 900 nm [Kahn, 1997]. 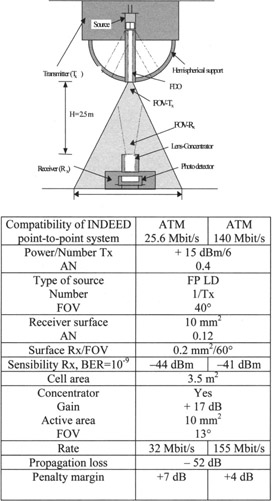 The INDEED photo-receiver unit is very different from the devices tailored ( custom-designed ) for optical fiber applications: