Red Hat often waits a while before including software in its Linux distributions. I believe this practice promotes the interests of stability. This practice extends to Logical Volume Management (LVM). As a RHCE, you need to know how to add, remove, and resize Logical Volumes (LV).

You learned to create logical volumes during the installation process in Chapter 2, and after RHEL 3 is installed in Chapter 3. If you've created and mounted any Logical Volumes on your RHEL 3 computer, they should be readily available in the /etc/fstab configuration file. For example, I have a fairly generic LV for the /home directory on a different RHEL 3 computer, and it shows as the following command line in /etc/fstab:

Alternatively, you should be able to find the same basic information with the vgscan command. You can verify configured volume groups (VG) with the vgdisplay command. For example, Figure 11-13 illustrates the configuration of logical volume Volume00. 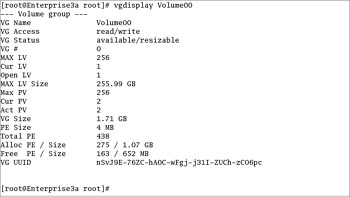 Before Logical Volumes are useful, you need to know how to add another LV. For example, if you've added more users, and they need more room than you have on the /home directory, you may need to add more LV for other filesystems, or resize the current /home directory Logical Volume.

If you haven't added an LV before, you'll need to set up the basic files and the kernel LVM module, lvm-mod. To do so, run the vgscan command. This creates the /etc/lvmtab configuration file and adds the lvm-mod module. The next time you boot Linux, the /etc/rc.d/rc.sysinit file finds your /etc/lvmtab file and automatically loads the lvm-mod module.

Adding another LV is a straightforward process. I've described it in some detail in Chapter 3, so I only summarize the steps here. For example, if you've just added a fourth SCSI hard drive, it's known as device /dev/sdd. If you need more Logical Vvolumes for the /tmp directory, you'd follow these basic steps:

Removing an existing LV requires a straightforward command. The basic command is lvremove. If you've created an LV in the previous section and want to remove it, the basic steps are simple:

If you have an existing LV, you can add a newly created PV to extend the space available on your system. All it takes is appropriate use of the vgextend and lvextend commands. For example, if you want to add PEs to the VG associated with the aforementioned /home directory, you could take the following basic steps: