The system runs a start-up program each time you IPL it. Although this program can be written in any language and can perform any task you want, in practice, the program is written in Control Language (CL) because CL has commands for operational activities such as starting subsystems, starting spool writers, and starting server jobs.

Marking a Program as the Start-Up Program

If you change this system value, the system will execute a different program during IPL. For example, if you create a program called IPLPGM in library mylib, and you want to make it the start-up program, change system value QSTRUPPGM so that it contains the name of the new program:

The system presents the panel shown in Figure 2.1. 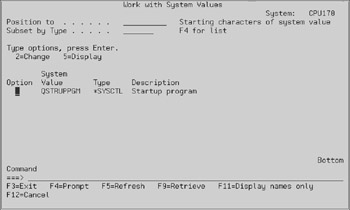 When you select option 2 and press Enter, the system prompts you for the new value in a much friendlier manner than CHGSYSVAL could offer. The results are shown in Figure 2.2. 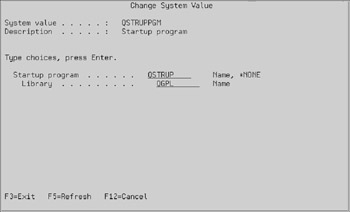 Now, all you need to do is type over the current values and press Enter.

If you do not want to write a new start-up program from scratch, you can just copy the source code of IBM's start-up program, make slight modifications, and give it a different name.