Getting Started with the SQL Scripting Tool 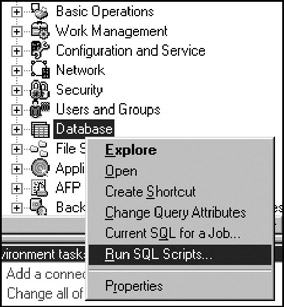 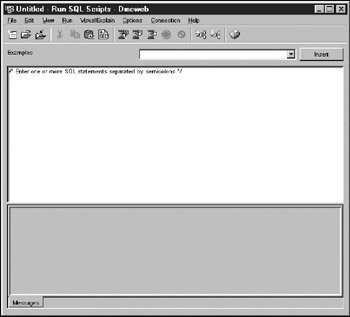 The primary feature of the scripting tool is a large text box. By default, this text box contains the comment /* Enter one or more SQL statements separated by semicolons */. The comment does not have to be deleted, but I find that it often confuses students and interferes with writing code. So, for the sake of avoiding future confusion, delete that comment. The text box should now be completely empty and ready for you to enter your first SQL statement. But before running an SQL statement, take a minute to configure the environment.

Click the Options pull-down menu and select those options shown in Figure 25.27. Five options are selected: 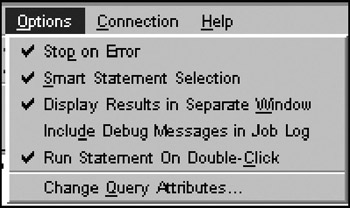 If you already know which SQL statement you wish to run, simply type it in. For example, type the following statement and run it by double clicking:

The following error should be displayed at the bottom of the window:

This error occurred because "/" is not a valid character for use in qualifying a file name. To identify which library a file resides in, use the period (.) instead. This SQL standard is followed on most platforms; the i5 may be the only system that uses the "/" (back-slash) character. Change the SQL statement as below and double-click it again:

Figure 25.28 shows the results displayed in a separate window. If the results are larger than the space provided in the window, the window can be resized; scroll bars are provided to display different portions of the result table. 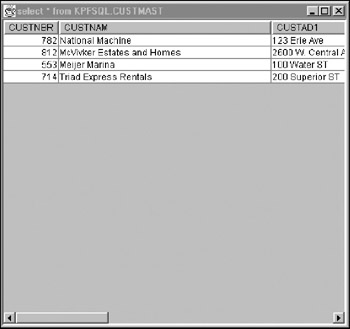 Notice that the error message from the first failed SQL statement is still listed at the bottom of the SQL Script window. To erase the old messages, click Clear Run History in the Edit pull-down menu. (The Edit pull-down menu also contains the option Clear Results. This option is not used in this chapter. If we had not selected the option to display results in a separate window, they would be displayed at the bottom of the text box, similarly to the error messages. Select Clear Results to erase previous result sets from the bottom of the text box.)

Now that the previous errors have been cleaned up, let's look at sorting the data. To sort the data, we'll add an ORDER BY clause to the SQL statement. Enter the statement as shown below and double-click it:

The customers appear in alphabetical order, sorted by their states, in a result window as shown in Figure 25.29. 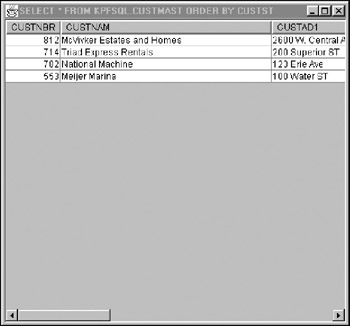 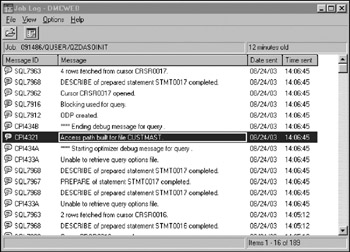 Any SQL statements that generates the message "Access path built for file…". is a candidate for this performance improvement task. Before building the index, consider how often the SQL statement is executed and how much overhead the access path will add to the database. Sometimes it is better to let the system generate a temporary index for infrequently run SQL statements rather than create an index that will require constant maintenance by the database engine.

Clicking the Run All icon

causes the execution of all SQL statements in the text box. Figure 25.31 shows the results of each SELECT displayed in separate windows.

By default, the windows are displayed directly on top of one another. To view them simultaneously, they must be moved and possibly resized.

Clicking the Run from Selected icon

causes the execution of all SQL statements in the text box starting with the one on which the cursor is located. Figure 25.32 shows the results of each SELECT displayed in separate windows.

Figure 25.32: Results from Run from Selected.

To force only SQL statement to execute, either click the Run Selcted icon

After coding a number of SQL statements, or perhaps coding some particularly complex SQL statements, you may want to save them for use at a later time. Unlike the STRSQL tool in the native environment, this STRSQL tool does not automatically remember your previous SQL statements. You must save them manually. To save the three SQL statements written above, click the Save As option within the File pull-down menu. The Save As dialog box shown in Figure 25.33 is displayed. 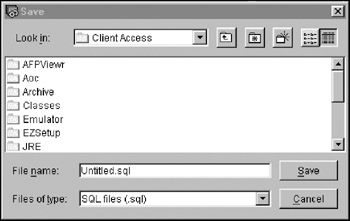 Select the desired folder and file name. The file suffix defaults to .sql and should not be changed unless absolutely necessary. If the SQL script files are saved into a network folder or a folder on the i5 Integrated File System (IFS), it can be shared with other programmers or users on the i5. If it is stored locally on your PC, only a user at your workstation can use it.

The history log maintained by the STRSQL tool is easy to use because it is automatic. It's harder to search, however, unless various important SQL statements are saved into well-named files. By well-named, I mean that the names need to intuitively reflect the SQL statements stored within them. SQL files named TEST1.SQL, TEST2.SQL, and TEST3.SQL, don't identify their contents. Had they been named PartCost.SQL, TotalSales.SQL, and ProductionSchedule.SQL, the nature of their contents would be clearer, and users would spend less time hunting for the right SQL statement.

Once the script file has been saved, it can be recalled by selecting the Open… option within the File pull-down menu. The Open dialog box shown in Figure 25.34 is displayed. 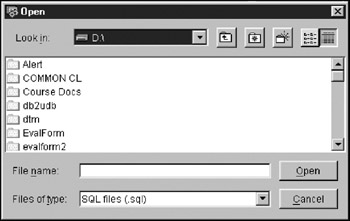 Select the desired folder and file, then click Open. All SQL statements saved within the selected SQL script file are loaded into the text box. From there, they can be executed as a group or individually as needed.

The Run SQL Scripts tool is a great example of the new client-based tools provided by IBM to help you manage your i5 and iSeries servers. Essentially, the tool provides the same capabilities as the green screen STRSQL command reviewed earlier in this chapter, plus even more. For more information on the Run SQL scripts tool, see the IBM manual "Advanced Functions and Administration on DB2 Database for iSeries".