Light and shadow define just about everything we look at, whether it's a photo of Hawaii or an image of a pool ball. They defines space perception and depth, and allow us to perceive colors. Take a look at the cube at right and its associated light source. 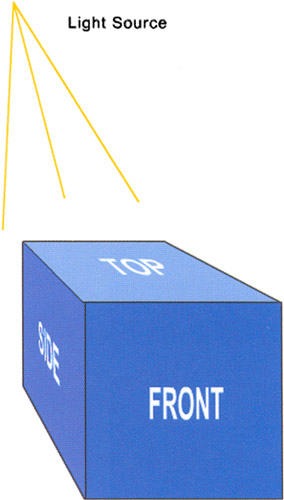 The box is light blue ”we know this by looking at the top. The light source from above is clearly illuminating the top of the box, showing its true color. The side of the box is receiving less light, making its color look darker. The front of the box is getting even less light, making its color even darker . We know the box is light blue, but the direction of the source light has made it appear three different colors ”this gives it depth. More fundamentally, this lighting effect helps us to recognize that the object it actually a box.

The effects of light and shadow are played out everywhere we look: on cars , on buildings , on people, on mountains , indoors, and so on. Because of these simple effects, we can gain a sense of the object placed in a three-dimensional space. This applies to everything we see. The challenge is re-creating that third dimension in the 2D format of digital art to make our viewers believe it is 3D. The nice thing about creating 3D in Flash is that Flash is very forgiving ; if you make a mistake, you can just undo and try again. We've already established that Flash MX is not a true 3D program (perhaps that's the reason you're reading this book on 3D cheats), but with a little know-how and imagination we can produce some really nice pseudo-3D. There are many more techniques involved in creating 3D effects with Flash MX, so keep reading!