Move the Indexing slider to Instant for immediate indexing of all new and modified documents. Move the slider to Lazy for indexing to take place when the system isn't busy with other tasks and for indexing that will not affect overall system performance.

Move the Querying slider to High Load for processing many queries at a time. Move the slider to Low Load if few queries are expected at a time. 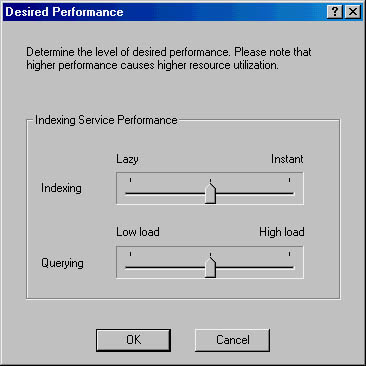 Chapter 32 describes how to use the data from Performance Monitor to target processes and components that need to be optimized, monitor the results of tuning and configuration efforts, and understand and observe the trends in workloads and the corresponding effect they have on resource usage. Among the many performance counters available in Windows 2000 are several that can assist in monitoring the Indexing Service and the Indexing Service Filter. Table 26-4 lists the relevant counters and what they measure. See Chapter 32 for details on analyzing performance data to determine acceptable values for counters and for information on solving any performance problems that are found.