When Is It Fun?

Getting your gameplay working is one of the most essential parts of game design, yet it is also one of the most difficult to try to explain or teach. A lot of the process involves understanding what is fun about a game in a way that no book can ever explain. Indeed, a game s design changes so often during the implementation stage that I do not believe a designer who is not actively working on the game during that period can truly be considered to have designed it. If this so-called designer simply typed up a 200-page design document and handed it to the lead programmer to implement while the designer frolicked in Bora-Bora, the lead programmer was then responsible for making the fundamental decisions that made the game fun or dull, stimulating or insipid, enjoyable or tedious . When the designer is AWOL during the implementation process, the lead programmer is probably the one who is actually designing the game. 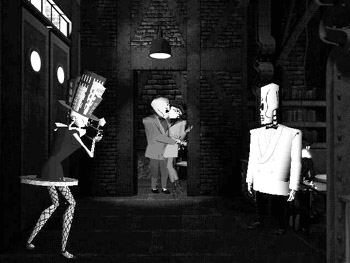 Game developers do their best work when working on games they care about and enjoy. The excellent Grim Fandango appears to be a perfect example.

So much of implementing your game design relies on personal gut reactions that it is no wonder people have great difficulty designing games for people other than themselves . This is why so many games that are aimed at the mass market but which are designed by people who are hard-core gamers turn out to be so terrible. The hard- core gamer doing the design wishes she was working on Grim Fandango but instead is stuck working on Advanced Squirrel Hunting . Even if she can overcome her contempt for the project itself, she will probably have no idea what the audience who may be interested in playing Advanced Squirrel Hunting wants in its games. Often features will be added to a game at the behest of marketing, over the protests of the development team. These features are always the worst in the game, not necessarily because they are bad ideas, but because the development team does not understand why they need to be added to the game or how they might improve the gameplay experience. In the end, it is very hard to design a good game that you yourself do not enjoy playing. If you do not like playing it, it is unlikely that others will either, even if they technically fall into the demographic you were so carefully targeting.

The first step in designing a game is to get some portion of the gameplay working and playable . Once you have a prototype that you can play and find to be compelling and fun in the right quantities , you should step back and make sure that you have a firm grasp on what makes it fun and how that can be extended to the rest of the game. With that prototype as a model, you can now move on to make the rest of the content for the game, replicating the fundamental nature of the gameplay while keeping the additional content new and interesting. Now that you know that your game design is a good one, it may finally make sense to craft a thorough design document that explains that gameplay and explores what variations on it may be used for the rest of the game. This will provide a valuable guideline for the rest of the team in fleshing out the game. In some ways, once the prototype is working, the truly creative and challenging part of game design is done, and the rest of the game s development is simply repeating it effectively.