I d basically watch the game play until I saw the AI do something stupid, then try to correct that and repeat ad infinitum. Over a long enough period that produced a pretty darn good AI. I have always tried to teach the AI the same successful strategies that I use in playing a game. ” Brian Reynolds, talking about the creation of the artificial intelligence for his games Civilization II and Alpha Centauri 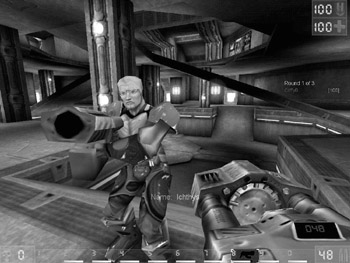 If a player plays a game of Unreal Tournament and cannot tell whether the opponent is a bot or a human, the bot s artificial intelligence has passed the Turing test.

Consider a game like Centipede . The AI for this game is completely predictable, with the various insects moving in predetermined patterns, with a small amount of randomness thrown in. Some people would say that the game does not really have any AI. Indeed, the behaviors of the creatures in the game are exceedingly simple to implement. But at the same time, the game provides a great deal of challenge for the player. The difficult part of creating the AI for a game like Centipede lies entirely in the design of those creatures behaviors and in coming up with the movement patterns that will provide an interesting challenge for the player. The AI is more design than implementation. Tetris , perhaps, is an even more extreme example. The only AI the game could be said to have is the random number generator that determines which piece will drop into the play-field next . Yet Tetris is designed such that this is the only AI the game needs.

The reader may be wondering why I am talking about game AI in a book about game design. Surely AI is a programming task, and since this book is not about programming, the discussion of AI contained in this chapter may seem out of place. But determining what the AI will do and actually programming that behavior are two fairly distinct tasks . The first primarily involves creativity and the second consists of a whole lot of hard work. A game s designer should be intimately concerned with making sure the game s AI behavior is as well conceived as possible and performs the actions most likely to provide players with a challenging and compelling gameplay experience. Part of designing a good game is designing good AI for that game, and a designer who just leaves the creation of the AI up to programmers better hope that they are good AI designers. If they are not, the game will likely not be much fun to play. As with many of the programmers on a development team, the AI programmer needs to have a good game design sense in order for the final AI to be sufficiently challenging, interesting, and entertaining to the player. The more the designer works with the AI programmer, the more likely the two of them will be on the same page in terms of what the AI needs to accomplish.

If a computer game is like improvised theater, where players get to be directors of the primary character or group of characters , then all of the other actors in the play are controlled by the artificial intelligence. As the game s designer, you want to direct those AI-controlled actors to create the most stimulating experience possible for the player. These AI agents are not just the opponents players might battle, but also any characters with which players interact. How will a town full of people behave? How will they react to players actions? Designing the AI is a big part of designing a game.