Sniffing Around with Ettercap

Although your computer comes with tcpdump , it is not the sort of tool that modern attackers have in their arsenal ”after all, it requires that you know how to type. For the lazy attacker, there are much better options, such as ettercap (http://ettercap. sourceforge .net/). Ettercap hides many of the details of sniffing behind an easy-to-use interface, and can even sniff switched networks.

A few of the "cool features" listed for version 0.6.7 on the Web site include

What makes ettercap truly dangerous is its capability to carry out ARP poisoning. ARP poisoning exploits the stateless nature of the ARP. Normally, machines send out an ARP request asking for the address of another machine, and presumably receive a reply. In ARP poisoning , the replies are sent without a request being made. The sniffer essentially tells the rest of the network that it is every other machine on the network ”and subsequently receives traffic for those machines. This type of attack is easily identified by viewing the ARP cache of a machine on the poisoned network ( arp -a ). If multiple machines map to a single MAC address, you may be viewing the result of ARP poisoning.

Ettercap, for all the attack capabilities built in, also features an extremely useful ARP poisoning detector, making it an effective tool against the very people who use it inappropriately.

You can download a precompiled .pkg version of the latest ettercap release from http://ettercap.sourceforge.net/index.php?s=download&p=binary.

After downloading and installing, start ettercap with /usr/sbin/ettercap . If you have multiple active network interfaces, use the switch -i <interface> to choose which will be used.

When starting, ettercap initially scans your network and collects IP and MAC addresses for all active machines, and displays two identical columns with the located devices. Figure 7.2 shows the initial ettercap screen. 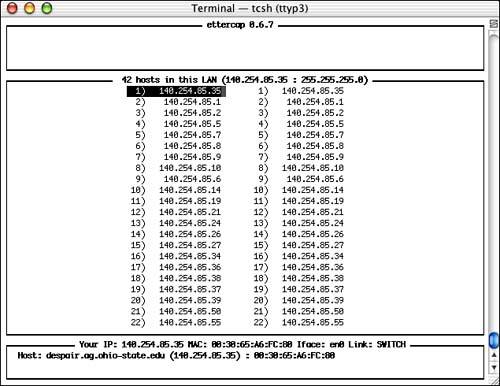 Ettercap is a cursor-based program that you can navigate with your keyboard's arrow keys. Help can be shown at any time if you press h. In the initial display, the left column is used to pick a potential source for sniffing, whereas the right column is the destination. You can choose one, both, or neither (to sniff everything) by moving your cursor to the appropriate selection in one column, pressing Return, then doing the same in the next . To deselect an address, push the spacebar. Figure 7.3 shows a selected source and destination pair.

Figure 7.3. Choose the targets you want to sniff, or leave either field empty to sniff all hosts. 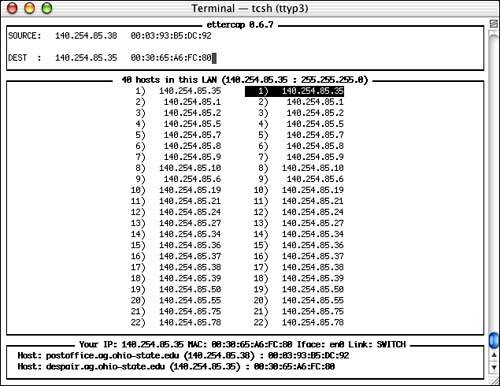 After choosing your targets, you can use the key commands in Table 7.3 to start sniffing and monitoring the hosts. Several commands do not require a source or destination and simply operate on the entire network, or on the actively highlighted machine.

After ettercap has started sniffing, the screen will refresh with a new display listing all the active connections that you can monitor, as shown in Figure 7.4. In this example, there are three connections: SSH, NetBIOS, and FTP.

Figure 7.4. Choose the connection to monitor. 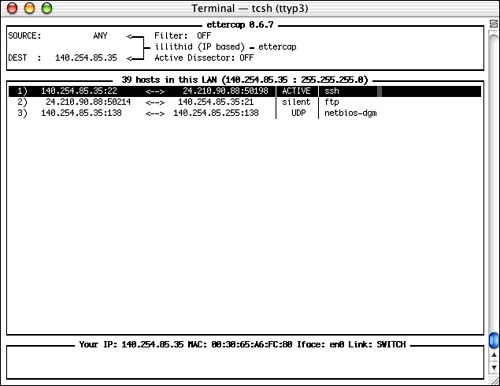 Use the arrow keys to choose an interesting connection (such as the FTP session shown in the figure), the press Enter, or use one of the other options, shown in Table 7.4.

Table 7.4. Choose What to Sniff

Assuming you chose to sniff the connection, the right side of the screen will refresh with a log of the data coming from the source, whereas the left will contain the responses sent from the destination. Figure 7.5 shows a sniffed FTP login that has failed. 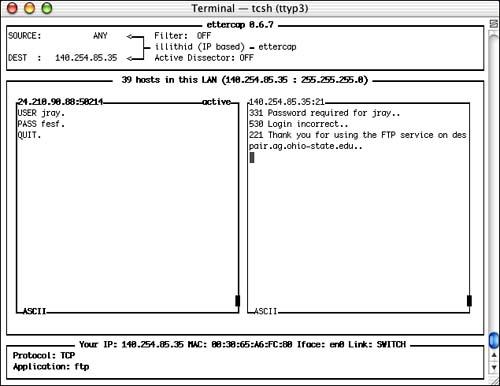 Use the key commands in Table 7.5 to control the sniffed connection.

As you can see, ettercap is easy to use and extremely powerful. I highly suggest that you read through the available help screens and be very careful with what you choose to do. The default distribution of ettercap includes a number of external plug-ins ranging from ettercap detectors to DoS attack implementations (for informational purposes only).