Many tools and utilities are available to you in ISA Server 2004. We start with the most commonly used tool, the ISA Server Management console, describe some of the wizards available, and then refer you to Microsoft Partner tools and third-party Web sites that provide a wide range of tools that can help extend the functionality of ISA Server.

See Chapter 12, "Scripting with Microsoft ISA Server 2004," for information about how to use scripts to automate and extend ISA Server's functionality. 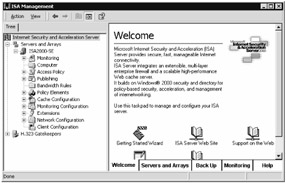 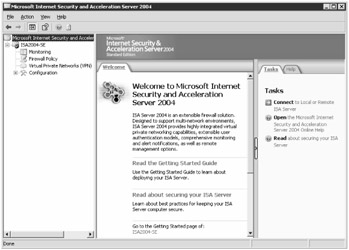 The console tree (left pane) shows all the different components of ISA Server. The details pane (middle pane) shows content, such as the Welcome information displayed in Figure 1-3. The task pane (right pane) contains prescriptive and descriptive information about the tasks on which you're working. For example, on the first screen you can click Connect To Local Or Remote ISA Server, Open The Microsoft Internet Security And Acceleration Server 2004 Online Help, or Read About Securing Your ISA Server. Tabs at the top of this section allow you to switch between functions, such as changing from the Tasks list to the Help information.

When you select the ISA server itself, you will see a Getting Started Guide for that server in the content pane, which steps you through the basics of configuring your ISA Server. Follow these steps to set up the most common configuration of ISA Server.

The task pane (right pane)—as shown in Figure 1-3—has several actions that are described in Table 1-8.

To view the other components of the ISA Server Management console, click the plus sign (+) to the left of the ISA server you're using (in our case, the ISA server's name is ISA2004-SE). You will then see the other areas: Monitoring, Firewall Policy, Virtual Private Networks (VPN), and Configuration.

The Monitoring node now incorporates a dashboard for enhanced system monitoring. When you select the Monitoring node in the console tree (left pane), you have seven (or eight with Enterprise Edition) tabbed pages in the details pane (middle). See Table 1-9 for a description of each page.

The Firewall Policy node is where you will spend the majority of your time administering ISA Server. The firewall policy consists of access rules, server publishing and Web publishing rules, and system policies.

VPN functionality has been extended in ISA Server 2004. The Microsoft ISA Server team went to great lengths to ensure that ISA Server administrators would be able to easily manage branch offices through the Virtual Private Networks (VPN) node. When you select the console tree, two tabbed pages appear in the details pane, as described in Table 1-10.

The Configuration node has four subnodes, as described in Table 1-11.

ISA Server 2004 includes several wizards that help automate tasks in a way that makes it easier to configure while using the most secure methods. Table 1-12 describes several of the more common wizards you will use.

ISA Server 2004 provides additional tools to assist with your day-to-day administration and troubleshooting efforts. Table 1-13 summarizes the tools that you will use most often.

You also need to be familiar with Windows Server tools to configure ISA Server properly. See the Windows Help file for more information about tools like IP and Interface Configuration, Security Configuration, Netsh.exe, and Route.exe.

There are many products created that help to extend ISA Server's functionality. For instance, software is available for handling intrusion detection, providing access control, monitoring traffic and events, reporting on logged content, and maintaining high availability (load balancing). For a complete listing of the add-ons for ISA Server, visit http://www.microsoft.com/isaserver/partners.

You can also use the ISA Server 2004 Software Development Kit (SDK) to create custom solutions. See http://msdn.microsoft.com/library/en-us/isasdk/isa/internet_security_and_acceleration_server_start_page.asp or download the SDK from http://www.microsoft.com/technet/downloads/isasrvr.mspx.