Although many keyboards sport USB ports (Section 1.8.1) along their sides, some of those USB ports aren't powered . They'll work fine for things like a mouse. But USB gadgetry that requires power, like clip-on keyboard lights, cooling fans, or wireless mice, may not work in your keyboard's USB ports. If your gadget doesn't work in the keyboard, and your computer's out of USB ports, plug the power-hungry device into a powered USB hub (Section 1.8.3).

When keyboard shopping, don't just look at the picture on the box or read the description. Take the keyboard out of its box, put your fingers on it, and start typing. Feel the weight of each key press, its responsiveness, and the sound it makes. You don't need to attach it to a computer while testing, since most judgments come down to whether a keyboard "feels right."

A few keys seem strangely out of place on a computer keyboard. Some keys atop the cursor area (Figure 2-3) furrow many brows, as they don't appear to do anything. The mystery is unraveled below:

Figure 2-3. Found on nearly all computer keyboards since day one, these keys are leftovers from the mid-80s. Windows still uses the PrintScreen (PrtScr) key, but the SysRq, Scroll Lock (ScrLk), and Pause/Break keys no longer work in the vast majority of Windows programs. 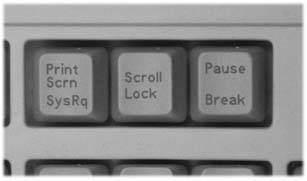 Some people work more quickly when their fingers stay on the keyboardmouse be damned . These mouse haters appreciate Microsoft's addition of special "Windows" keys to its latest keyboard model in 1995. Other keyboard manufacturers played copycat, and now almost every modern keyboard sports the Windows logo key and the Application key, as described in Table 2-1. These two keys provide quick access to common taskscalling up the Start menu and navigating its submenus, for instance, rather than having to reach for the mouse to click the Start button.


Tip: If you find yourself accidentally hitting the Windows logo key when reaching for the Shift key, you can disable either one or both Windows keys with a small program from John Haller's Web site (http://johnhaller.com/jh/useful_stuff/disable_windows_key/). (Some people simply pry off the offending keyboard button caps, leaving a low-profile stub.)

A press of the Windows logo key followed by another key creates shortcuts for several common tasks, as explained in Table 2-2.


Note: Although most desktop and laptop keyboards include a Windows logo key, many IBM ThinkPads leave it off. Instead, ThinkPads come with a program with the unfriendly name of TpKMapAp, which you can use to convert the rightmost Alt key to a Windows key.

2.1.4. The Ctrl+Alt+Del Cure for Frozen Programs

When one of your programs freezes on the screen, pressing the Ctrl+Alt+Del keys simultaneously provides a handy way to pry the troublemaker off your screen. That magic key sequence brings up Windows XP's Task Manager (see Figure 2-4), which is useful for not only killing frozen applications, but also for viewing technical details about your computer to help diagnose problems.

To kill the program, click the Task Manager's Application tab, right-click the problematic program, and then choose End Task. Windows XP whisks the program off your screen. You lose any unsaved work from the misbehaving program, unfortunately , but at least your computer and your other open programs stay up and running.

2.1.5. Controlling Windows with only a Keyboard

Faced with a broken mouse? Wireless mouse lose battery power or disappear behind a couch ? Loath your laptop's touchpad? Looking for a quick keyboard shortcut? You can completely control Windows without ever touching a mouse by following these tips.

Tip: Should your keyboard die before your deadline, Section 2.2.1 explains how to continue working in Windows XP using only a mouse.

Frustrating novelists, bankers, mathematicians, and trademark attorneys worldwide, the computer keyboard leaves out common symbols like , , , and hundreds of others. Windows handles those extra symbols with an Alt code a bit of programming wizardry that summons symbols when you type in certain number combinations.

Admittedly, these restrictions are way too much for casual novelists to remember. That's when Windows' Character Map program, shown in Figure 2-5, simplifies the process. To call Character Map from its hiding place, click Start

When you find the symbol or character you're after, double-click it. Then use Ctrl+V or Edit

Paste to insert it into your document. Character Map also displays the highlighted symbols Alt code in the window's bottom right corner; feel free to jot it on a sticky note for future reference, along with the words "Use Numeric Keypad."

Figure 2-5. Character Map simplifies entering hundreds of symbols like the ones used to designate copyright, trademark, foreign currencies and alphabets, and scientific symbols. Double-click the symbol you need, and paste it into your document by pressing Ctrl+V. 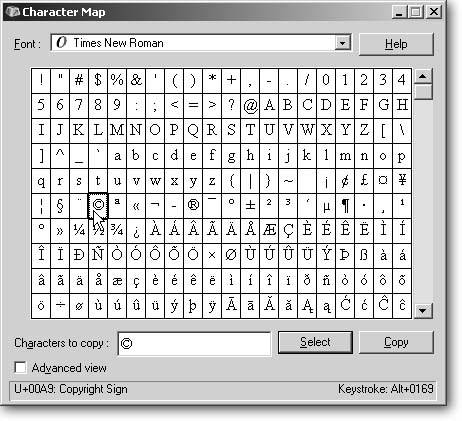 No matter how inconvenient it may be to tourists, keyboards in foreign countries use layouts that match the country's native language, sprinkling foreign characters across the keyboard. When you encounter an unfamiliar foreign layout in an Internet Caf, switch to the English layout for easier typing: click Start

Click the small Language Bar when it appears in your taskbar (shown in Figure 2-6), and click the English layout to quickly switch to your familiar key locations. Since the keyboard's actual keys don't magically reposition themselves, this trick works best for touch-typists. If you need to see the letters on the keyboard in their familiar layout for reference, Microsoft's On-Screen Toolbar (Section 2.2.1) provides a handy cheat sheet.

In most cases, the menus for Windows and its programs continue to display the foreign country's language, unfortunately. But when you open the computer's Internet browser and visit an English-language Web mail site like Yahoo (www.yahoo.com) or Google (www.gmail.com), you can touch-type your message using your familiar, native-language layout.

Figure 2-6. The Language Bar comes in handy when typing documents that mix words from two different languages. It quickly converts your keyboard's layout from English to other languagesSpanish, for instance, or Russianletting you type foreign characters quickly and easily. The Language Bar also works in a pinch when you encounter a foreign layout while traveling. Click the Language Bar to see the available layouts, and then select the one you want to use when typing.

No matter what keyboard you buy, the cable comes with one of two plugs: USB (Section 1.8.1) or PS/2 (Section 1.8.6). USB keyboards plug into a USB port while the computer's turned on or off; Windows XP recognizes the incoming keyboard immediately. (Lefthanded accountants can even plug in two keyboards simultaneously, using the numeric keypad of the keyboard on the left for entering numbers.)

No matter what keyboard you plug in, Windows XP always recognizes its basic functionsthe four areas described in Figure 2-1. But if your keyboard contains any fancy features like dedicated keys, embedded speakers, USB ports, or other frills, you must install the software that came with the keyboard.

To type the word "Harrummmmmph," you can tap the "m" key several times. Or, you can hold down the "m" key until it starts repeating. But how long should you hold it down before it does this? And, when the letter begins to repeat, how quickly should the letters flow? Instead of leaving you to ponder these theoreticals, Microsoft's programmers simply chose some common settings.

But if you want to tailor your harrummmmmph to your own specifications, click Start

Keyboard and play with the fine-tuning knobs shown in Figure 2-7, and described next.

Figure 2-7. If your typed letters accidentally repeat themselves, you can use the Control Panel's Keyboard Properties box to adjust the repeat rate to meet your needs. You can also visit this area for general troubleshooting, since the Hardware tab provides quick access to your keyboard's drivers (the utility programs that translate between your PC and any equipment that's attached to it). 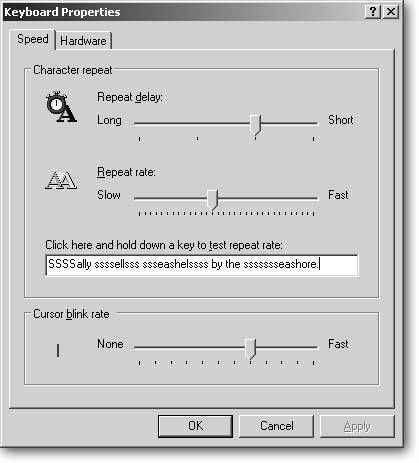 When your keyboard doesn't work, breathe a sigh of relief. It's your computer's most inexpensive part. You can pick up a new one for under 20 bucks at most computer stores. But since 20 bucks also buys a decent pizza, try some first aid with these quick fixes. 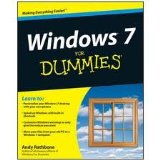