Generally, a performance objective is a measurable attribute, or quantified result of work behavior, that can be used to gauge the performance of a team or an individual. In organizations that primarily perform maintenance operations, performance appraisal is limited to a feedback process between employees and supervisors. In the project management environment, such an appraisal is usually completed by the individual's functional or department manager, often with input from the project manager. With the increasing use of project teams in organizations, particularly with the movement toward the concept of managing the organization by projects, a much larger set of attributes should be measured and rated. Each team member should establish specific performance goals for his or her work. These goals must emphasize teamwork as well as individual results. Further, in such a collaborative team environment, each team member should provide input to the performance appraisals of other team members with whom he or she collaborates in a significant way.

In order to align the work of each individual with the work of the project team, a multiple feedback approach to performance is highly recommended. This approach, commonly known as a 360-degree evaluation, is also called multirater, full circle, and multilevel feedback and refers to a general process of gathering observations concerning performance from many different individuals. In a 360-degree evaluation, team members, the project manager, the functional manager, the client, and others as appropriate conduct separate appraisals of the same subject. Since team members have a uniquely realistic perspective on one another's performance, a 360-degree evaluation should result in a much more realistic and comprehensive evaluation.

To support project teamwork, each of the team members should have the opportunity to evaluate other team members using the 360-degree approach. Ideally, the items to be evaluated should be collectively determined by the team members during the project kickoff meeting. Team members could either design an entirely new system or tailor a rating system that is currently in use in the organization. If the team members have a direct involvement in the design and customization of the evaluation instrument, they are far more likely to value the resulting data and subsequent recommendations. If the entire team is involved in determining the specific items that are to be used in rating each other, and if this is done at the beginning of the project, then possible biases of individual members of the entire group of raters will be averaged out. Additionally, the team, as a unit, should develop a procedure to govern the use of the rating process. Team input, as compiled through this type of instrument, can be particularly useful for recognition and awards. Further, it may be helpful to have ratings completed periodically so that the team can determine whether changes are necessary in the processes and procedures or in the behavior of individual team members.

The primary focus of this evaluation is on ways to improve work performance of the project team. However, there are often many personal challenges and issues in a team environment that can become sources of frustration and stress, which in turn distort the performance of the team members. An evaluation system of the type described here will give team members the opportunity to improve the working relationships within the team. The results of this instrument can point to developmental needs of team members or to the need for new tools and techniques that support virtual team effectiveness. Naturally, the frequency at which the ratings are performed would depend on the length of the project and on the mood and wishes of the project team.

There might be circumstances where it may be desirable to conduct the rating process anonymously. For example, on a newly formed team, it may be useful to keep the identities of each team member confidential so that there is honest feedback. However, if the team is a mature one, and/or if open communication is part of its culture, there would be enough trust among team members so that raters can be identified. Such an open evaluation will provide the foundation for direct feedback, coaching opportunities, and continuous improvement.

The 360-degree instrument also can be used, with minor tailoring, for a self-assessment by each of the team members. Using the results of this instrument, each team member will see how others perceive him or her, compare those views with his or her own self-assessment, and identify his or her own strengths and weaknesses. Thus, the feedback can serve as a motivating factor to enhance individual competence. Alternately, the focus of the assessment can be solely on mutual explorations by the team members on ways to improve overall team performance, without identifying specific individuals who are the source of such evaluations. Using this approach, first each team member rates other team members anonymously. Then, a neutral third party analyzes the anonymous ratings and presents the summarized results to the entire team as a unit.

Appendix 4A contains a 360-degree assessment tool that can be used by virtual team members. This tool is based on the ten critical dimensions of virtual project teams described earlier. Each of the dimensions has 15 specific items that collectively comprise the overall rating. A five-level Likert scale has been set up for the rating. Naturally, a team should use this template as a starting point as it designs its own instrument based on the unique characteristics of its project. In performing the rating, each team member will use the following scale for responses to all the questions:

Figure 4.4 shows a stylized depiction of the evaluation results for three team members. In this example, one can easily see areas in which team member A excels and those in which team member B excels. Naturally, the person to emulate would be member C. Thus, members A and B can use these results as a motivating factor to observe the effectiveness of member C in the areas of interest. The evaluation results will also provide each team member the opportunity to develop a personal improvement plan in those areas in which he or she may be rated lower than others. When this evaluation is extended to the entire team, the compiled results will offer opportunities for identifying possible mentors and coaches for other team members. 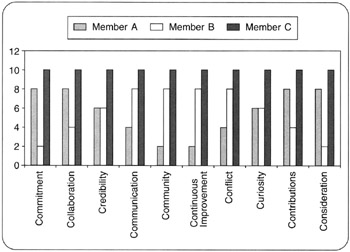