The ThreadGui application examines some of the threading issues that you have to face in a Windows Forms program. Multithreading can be very useful in this environment because it lets you keep the user interface responsive to the end user while you're doing intensive work, and you can also use it to let the end user cancel a long-running task. The drawback is that you need to respect the single-threaded nature of a Windows Form.

If you load the ThreadGui solution into Visual Studio and execute it by pressing F5, you'll see the application's user interface, as shown in Figure 14-6. 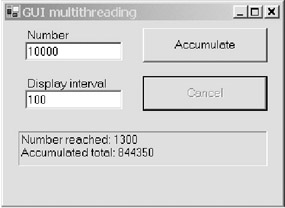 Figure 14-6: The user interface of the ThreadGui application

When you enter a number into the top text box and click the button marked Accumulate, the program accumulates a running total by adding every number together between 1 and the number entered in the text box. So if you entered 5 into the top text box, the accumulated total would be 15 (1 + 2 + 3 + 4 + 5). The Cancel button allows you to interrupt and stop the accumulation calculation at any time. The label at the bottom of the form displays the results of the calculation.

The second text box is used to allow the user to monitor progress of the calculation. After the accumulation is performed the number of times specified in this text box, the current running total is displayed in the label at the bottom of the form and the display is paused for 0.1 second so that the user can glimpse this intermediate result. Then the calculation continues accumulating until either the next display interval is reached or the calculation finishes.

The challenge is to run the potentially lengthy calculation while keeping the user interface responsive so that the user can cancel the calculation and while displaying the intermediate results of the calculation in a safe manner.

The first major problem to overcome is that you should never, ever, update a control (in this case, the label at the bottom of the form) from a thread other than the thread that created the control. If you break this Windows Forms law, your program will experience strange and difficult multithreading bugs, and you won't be able to fix these bugs except by changing your program to obey the law. The first approach that many developers experiment with when faced with this prohibition is to tell the calculation thread to raise an event that the form can handle and use to update the user interface. Unfortunately, as mentioned earlier in this chapter, this won't work. An event handler always runs on the same thread that raised the event, so the event handler also isn't allowed to update the user interface.

The second problem is for the user interface thread to find a way of telling the calculation thread that the user has canceled the calculation request. Often a developer will think about setting a class-level variable that can be accessed and shared by both threads. This is, however, difficult to do without running into the thread synchronization issues that I discussed in the previous section.

Listing 14-11 shows the code that launches the worker thread to do the calculation once the user has clicked the Accumulate button. It uses an asynchronous delegate to spawn a work request that will be handled by the .NET thread pool. The delegate's BeginInvoke method is used to start the calculation thread asynchronously and pass it the specified number to accumulate.

If you don't need the control that a manual thread gives you, such as setting the thread name or priority, using the thread pool spares you from the messy details of thread management and scales better in many multithreaded environments. Even better, as you'll see shortly, it's easy to propagate background thread exceptions back to the main thread when using the thread pool.

Listing 14-12 shows the method that runs the calculation thread. First place a breakpoint on line 162 (the line marked in bold in Listing 14-12) and then run the application by pressing F5. When you click the Accumulate button, the program will break as soon as it reaches your breakpoint. If you now look at the Threads window, you'll see two threads: the user interface thread and the calculation thread from the thread pool.

So the first problem of updating the user interface is solved , but you still need to tackle the problem of canceling the thread if the user clicks the Cancel button. The code behind the Cancel button is shown in Listing 14-14. It sets a class-level variable signifying that the user has issued a cancellation request. But how can you give the calculation thread access to this variable without running into thread synchronization issues?

The key to this puzzle lies in the ShowProgress method shown in Listing 14-13. This method has a ByRef argument called CancelRequest . When this method is called on the user interface thread, it sets this argument to the class-level request cancellation variable. Because the calculation thread regularly calls the ShowProgress method to update the user interface with its progress, it can read the cancellation request argument after it's called the Invoke method. This allows the request for cancellation to pass safely from the user interface thread to the calculation thread without having to worry about synchronization issues. Yet again, a message passing between the two threads prevents any problems that might arise if the two threads interacted directly.

Finally, once the calculation thread has completed, it invokes the callback that it was passed when it was started. This is the CalcComplete method shown in Listing 14-15, which simply resets the user interface so that another request can be started.