Since Microsoft Windows SharePoint Services 2.0, WSS has provided integration with Office InfoPath through forms libraries. A forms library is a specialized type of document library designed to store XML documents created from InfoPath forms. The main difference is that standard document libraries are based on a built-in WSS content type named Document, whereas forms libraries are based on a built-in content type named Form that inherits from Document. 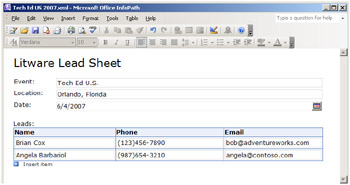 Figure 7-5: A WSS forms library with a custom form template can serve up InfoPath forms.

The DocumentManager feature provisions an instance of a forms library and configures it to use Leadsheet.xsn as its document template by using the same technique shown earlier in this chapter with the Proposals document library. The DocumentManager features contains a ListInstance element to provision the forms library instance as well as a Module element to provision an instance of Leadsheet.xsn into the site so that it can be used as the document template.

You’ve now seen how to provision the Leadsheets forms library and configure some of its properties. Next, we will bind an event handler to the ItemAdded event that fires whenever a user uploads a new Leadsheet document. This gives us an opportunity to see how to access the content of a document from an event handler that is bound to a document library.

As you can see, the SPItemEventProperties parameter of the ItemAdded method makes it easy to access the SPFile object associated with the InfoPath form that has just been uploaded. Once you have a reference to this SPFile object, you can access the form’s content as a byte array by calling the OpenBinary method or as a stream by calling the OpenBinaryStream method. You should observe that the preceding example uses the best practice of opening the stream within a using statement so that the stream object is properly disposed of after it is used.

Once you open a stream to access the InfoPath form’s content, you have several options. For example, you can read the XML content inside the form by using a class from the System.Xml namespace, such as XmlReader or XmlDocument. However, there’s an easier method. Because every InfoPath form has an associated XML schema, you can use the XSD.EXE utility to generate a schema-derived class, which is the technique used by the DocumentManager solution.

The DocumentManager project contains a source file named Leadsheet.cs that is generated with XSD.EXE from the XML schema associated with the InfoPath form Leadsheet.xsn. Inside Leadsheet.cs are two schema-generated classes named Leadsheet and Lead. You can use the XmlSerializer class to deserialize the XML content in the InfoPath form into strongly typed objects. For example, you can write the code inside the ItemAdded event handler to deserialize the content of the form into a Leadsheet object. You can then access the leads by using a foreach loop to enumerate through Lead objects.

The DocumentManager demonstrates this technique by deserializing the Leadsheet data and writing information about each of the leads into a WSS list in the current site named Sales Leads. Each time that a new InfoPath form is uploaded, this event handler automates the task of taking the data inside it and writing it into a list. The following code is a complete listing of the ItemAdded event handler from the DocumentManager solution.

It’s important to note that after-the-fact events, such as ItemAdded, fire asynchronously, which means that the event handler might continue to run even after control is returned back to the user. Asynchronous event handlers run under the identity of the user that triggers them. For example, imagine that the user Brian Cox uploads a new InfoPath form that causes this event handler to run. When the ItemAdded event handler adds new items to the Sales Leads list, it does so with Brian’s permissions and with Brian’s identity. We will discuss how you can change this default behavior of an event handler when we discuss security in Chapter 10, “Application Security.”