In terms of general WSS architecture, it’s important to observe that a document library is really just a specialized type of list. Similar to any standard list, you can add additional columns to a document library. This is a common practice in custom SharePoint solutions because it makes it possible to track metadata for documents. It is also important to note that each document library instance is included within the Lists collection of the current site.

Assume that you want to write the code for a custom application page or a Web Part to populate a DropDownList control named lstTargetLibrary with the Title of the document library instances inside the current site. Keep in mind that there are many hidden document libraries that you might not want to display to users, such as the Web Part gallery, Site Template gallery, List Template gallery, and Master Page gallery. Therefore, you want to write your code to discover all of the document library instances for the current site that are not hidden.

Note that the code shown here adds ListItem entries to the DropDownList control that includes the Title as the ListItem Text and the GUID-based ID as the ListItem Value. When a user selects a particular document library title from the DropDownList control, you can quickly access the target document library from the current site’s Lists collection by using its identifying GUID and converting it to an SPDocumentLibrary class.

The SPFile object, on the other hand, can be used to control other aspects of the document and to read or write the document’s content. Examine the following code fragment:

One thing you must watch for is the scenario in which a document library contains folders in addition to documents. Note that folders, like files, are stored as items within a document library and show up as SPListItem objects in the Items collection. This is why the previous code checks the FileSystemObjectType property of the current SPListItem object before attempting to process it as an SPFile object.

If you want to write code in this fashion that continues to discover documents in nested folders, you can write code that involves recursion. In the DocumentManager project, a custom application page named DocumentManager1.aspx, which is accessible through the Site Settings menu, contains code to discover all documents in a site that exist within document libraries that are not hidden. The code populates a TreeView control displaying the document libraries as well as the hierarchy of the folder structure within each document library, as shown in Figure 7-1. 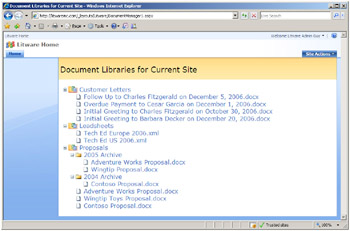 Figure 7-1: DocumentManager1.aspx contains code to populate an ASP.NET TreeView control with nodes for all documents within the current site.

The code used to populate the TreeView control in DocumentManager1.aspx is not overly complex. It contains an OnLoad event handler that enumerates through all of the lists and discovers which are document libraries that are not hidden. For each of these document libraries, it creates a TreeNode control and then calls a helper method named LoadFolderNodes to create child TreeNode controls for each document. The LoadFolderNodes method calls itself to move recursively through all folders that might be nested below the root folder.

Adding a New File to a Document Library

It is now time to write the code required to create a new document within a document library. If you want to follow along in the DocumentManager project, use Microsoft Visual Studio to open the custom application page named DocumentManager2.aspx and examine the code in the OnLoad event handler that populates a DropDownList control named lstTargetLibrary with all of the available document libraries in the current site. The page definition for DocumentManager2.aspx also contains a check box named chkShowHiddenLibraries that enables the user to determine whether the hidden libraries should be shown to users.

Figure 7-2 displays the basic page layout for the custom application page named DocumentManager2.aspx. The user interface enables the user to select a target document library and type in a file name. It also provides a multiline TextBox control that enables the user to type in the content to be written into the new file. Although this example is fairly simple, it steps through what’s required to programmatically create a new document and save it within a document library. 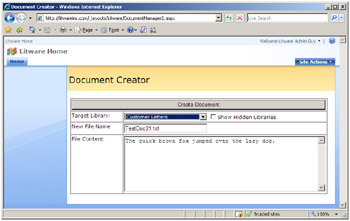 When the user clicks the button with the caption Create Document, an event handler executes the code required to create a simple text file and store it within the target document library. The first issue you must deal with is parsing together the path for the new document. Examine the following code, which uses the ServerRelativeUrl property of a document library’s RootFolder object together with the MakeFullUrl method of the current SPSite object to construct the full path for a new document.

As you can see, the document path is parsed together using the file name as well as a full path to the target document library. Once you have parsed together the path, it’s necessary to use a stream-based programming technique to write the contents of the new file. There are many possible ways to accomplish this by using various classes within the System.IO namespace. One efficient way to accomplish this task for a simple text file is by creating a MemoryStream object and writing into it by using a StreamWriter object.

Once you have parsed together the path for the new document and written the new document’s content into a MemoryStream, you can then simply save the new document into the target document library by calling the Add method on the Files collection on the SPWeb object for the current site.

Now, consider a scenario in which you are adding a document to a document library that has custom metadata columns. For example, imagine that you are dealing with a document library with a custom column named Client that is used to associate each document with a particular client. What should you do if you want to assign a value to this column when you store the document?

Note that the property name of the Title column is vti_title and not Title, as you might expect. Many of the built-in columns used in WSS lists and document libraries have similar names that are not intuitive. You can discover these file property names by enumerating through the Properties collection of an SPFile object created from an object in the target document library.

Using a Feature to Provision a New Document Library Instance

Now that you have seen how to provision a document library instance within a feature, you likely want to replace the standard document template with one of your own. Quite a bit of work is involved if you want to add support for a custom document template using only Collaborative Application Markup Language (CAML) because CAML only enables you to define document templates in a site definition, something that involves far more work then necessary for this scenario. A much easier approach involves mixing declarative CAML logic with some WSS object model code in the Feature_Activated event.

Next, you can create a FeatureActivated event handler and add the code required to create an SPDocumentLibrary object associated with the target document library. You can then assign a path to the document template to the DocumentTemplateUrl property. Make sure you remember to call the Update method to save your changes.

When you obtain an SPDocumentLibrary reference to the newly created document library, you can do far more than simply assign a custom document template. You can also configure many other aspects of the document library’s behavior, such as disabling folder creation, enabling versioning, and enabling forced document checkout.

As you are designing and implementing document libraries for a custom business solution, you might want to give users the ability to perform custom operations on the documents inside them. By creating CustomAction elements within a feature, it’s easy to add custom menu items to the ECB menu for documents within a document library. In Chapter 2, you viewed an example of the addition of a CustomAction based on the list type for Document Libraries, which is 101.

While this action adds an ECB menu item for each document in a standard document library, it is not guaranteed to add this ECB menu for all documents. For example, there could be specialized types of document libraries, such as forms libraries (shown later in this chapter) that have a different list type ID.

A second option when creating a CustomAction is to specify the target item in terms of its file extension. This provides the ability to supply a custom ECB menu item for a special type of file, for example, those with .doc, .docx, and .pdf extensions.

A third option when creating a CustomAction is to specify the target item in terms of its content type, which provides more flexibility because content types support inheritance. When you specify a content type, it automatically includes all of the other content types that inherit from it. For example, if you wanted to add an ECB menu item for every type of item, including documents, you can use the generic Item content type with a RegistrationId of 0x01.

Once you activate the DocumentManager feature within a site, every document within any document library receives a new ECB menu item with a title of Document Manager Assistance, as shown in Figure 7-3. When a user selects this ECB menu item for a specific document, WSS responds by redirecting the user to the URL specified in the UrlAction element. As discussed in Chapter 2, WSS dynamically replaces the tokens~site, {ItemId}, and {ListId} when it generates this URL at run time. This resulting URL is site specific and redirects the user to the custom application page named DocumentManager3.aspx with a QueryString indentifying the document and its document library. 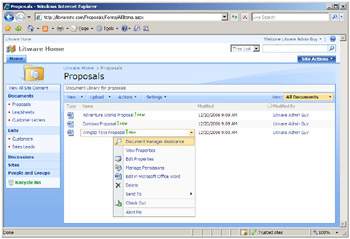 Figure 7-3: An ECB menu item can be created for every document. 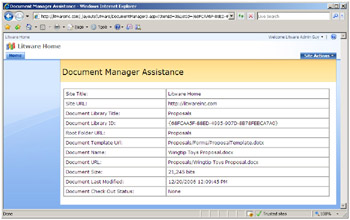 Keep in mind that it’s important in some scenarios to perform a test on an SPList object to ensure that it is compatible with the SPDocumentLibrary class before performing a conversion. However, in this particular scenario, this test is unnecessary because the ECB menu item used to redirect users to DocumentManger3.aspx is based on the Document content type. Therefore, this custom menu item appears only in the ECB menu of documents within document libraries. The following is a listing of the code in DocumentManager3.aspx that programs against the document from which the ECB menu item was selected: