One of the best things about COM is that it hides the details of interprocess communication. The code you write for an in-process object will automatically work for an out-of-process object. You don't have to change anything in your class module. The client-side code that you write doesn't care whether the object is close by or far away.

The hiding of interprocess communication details from both objects and clients is known as location transparency. As you saw in earlier chapters, this powerful feature is made possible by the universal marshaler and its ability to read interface definitions from type libraries at run time. Figure 6-1 shows how the proxy and the stub are built at run time. When an interface reference is marshaled from one process to another, the universal marshaler builds these helper objects by inspecting the interface definition in a type library.

Code written for an in-process object automatically works in an out-of-process object, but it won't necessarily be efficient. Many techniques that work efficiently for in-process objects yield unacceptable results when taken out of process. The overhead of the proxy/stub layer becomes a significant consideration during the design phase of an application. When you begin to draft a set of remote interfaces, you must consider several factors that aren't part of a classic OOP design methodology.

When a client invokes a method, it passes control to the object for the duration of the call. Every call in which control is passed to the object and then back to the client is called a round-trip. When a method is invoked on an object in another process, the round-trip must go across a proxy/stub layer. This means that every out-of-process method call requires a thread switch and the marshaling of data between the client's process and the object's process. 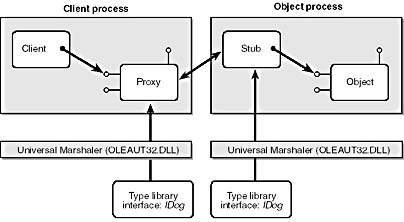 Figure 6-1. The universal marshaler creates a proxy and a stub when an interface reference is marshaled across processes. If the client and the object are running on different machines, each computer requires a local copy of the type library.

Figure 6-2 shows a table with benchmarking statistics for method calls in three different scenarios: in-process, out-of-process, and remote. These benchmarks were measured using empty methods to demonstrate differences in the overhead of method invocation. You can see that the round-trip time increases by a factor of about 1000 as you move the object out of process. When you take an out-of-process object and move it onto another machine, you take another significant performance hit.

If the client machine and the server machine are physically distant, you encounter yet another frustrating obstacle: the speed of light! For example, let's say that a round-trip between a computer in New York and one in Los Angeles is 5000 miles (2500 miles in each direction). If a method call were propagated across the wire at the speed of light, you would experience about 37 calls per second (186,000 miles per second divided by 5000 miles per call). The actual transmission speed of a remote COM method is, of course, less than the speed of light. In reality, you would experience fewer than 37 calls per second between these cities.

The lesson from these benchmarks is that round-trips are inherently evil. Your mission as a COM programmer is to eliminate the need for excessive round-trips. When you design a class or a user-defined interface, you should never expose three public methods or properties when a single method can accomplish the same amount of work. If your class exposes three public properties, a remote client will require three round-trips to access all the data. When a remote interface design isn't very efficient, the client code begins to looks like this:

You can see from Figure 6-2 that marshaling a complete set of data in a single round-trip is much better than marshaling smaller amounts of data in multiple round-trips. If you need to move many bytes across the network to complete an operation, you should try to create a single signature that lets you do it in one shot. How can you improve the interface for the CRectangle class from the previous example? If you create a SetRectangleData method that takes four input parameters, the client can initialize the object in a single round-trip, like this:

Choosing Between ByRef and ByVal

When you create an interface, you should first think about optimizing round-trips. Then you should tune the parameter declarations in your methods to optimize the packets of data that move across the network. Some parameters must be pushed from the client to the object, and others must be pulled from the object back to the client. Some parameters need to move in both directions. Look at the following three method signatures, and think about how the universal marshaler interprets each one:

Many Visual Basic programmers incorrectly assume that ByRef is always more efficient than ByVal. In an in-process call, a ByRef parameter is simply passed as an address to the data that's being referenced. In an out-of-process call, ByRef is always more expensive because the universal marshaler must also transmit the data that is being referenced. This means that ByVal is more efficient for parameters in remote interfaces. Use ByRef parameters only when you need to, such as when you need to move data from the object's process back to the client's process.

Now you might wonder, "How can I simply pull data from the object back to the client?" Unfortunately, Visual Basic doesn't make it straightforward. COM and IDL define parameters as [in], [out], or [in, out]. Visual Basic doesn't know how to deal with the COM [out] parameters. The only way to explicitly pull data back from the object is to use a method's return value. The problem with return values is that you can define only one for each round-trip. You're usually better off defining several ByRef arguments in a single method. You simply have to tolerate the fact that you're pushing unnecessary data from the client to the object. The following method signature shows the most efficient way to pull several pieces of data back from the object in a single round-trip:

To call this method from a client, you must create local variables of the correct type and pass them in the call to GetRectangleData:

After you call GetRectangleData, the local variable is populated with the data sent from the object. If you understand Visual Basic's inability to handle [out] parameters, it's simple to choose between ByVal and ByRef. You simply decide which way you want to move the data. The same rules apply for every primitive data type.

The first of the four special primitive types is the Visual Basic for Applications (VBA) string. A VBA string is defined in IDL as a basic string (BSTR). A BSTR is a complex data type that is represented in memory by a cached string length value and a zero-terminated character array. (Characters are stored in Unicode, not ANSI.) The universal marshaler reads the length value of the BSTR to determine how many characters to send across the wire. Whether you declare a string parameter as ByRef or ByVal, all the data is automatically marshaled across the proxy/stub layer.

The second special primitive type is the VBA array, which is defined in IDL as a SAFEARRAY. A SAFEARRAY keeps track of not only the data for the actual array but also the upper and lower bounds of the array and other metadata that describes the data in the array. The universal marshaler can marshal a complete array in either direction in a single round-trip. You can declare a method signature with a ByRef array parameter, like this:

Using Visual Basic 5, you can pass dynamic arrays if you declare them ByRef. This means that you can move an array in either direction. Using Visual Basic 6, you can also use an array type as the return value for a function. When you marshal arrays, you should be careful to pick the most efficient data type. An array of Doubles (8 bytes times n elements) generates four times the amount of network traffic as an array of Integers (2 bytes times n elements). Using an Integer data type can result in significant savings if you move arrays that have hundreds or thousands of elements.

The third special primitive type is the variant, a self-describing data type that is recognized by both VBA and IDL. As you will recall, this data type is the key to making automation and IDispatch work. A variant can hold anything—an integer, a double, a string, or even an array. When you marshal a variant, the universal marshaler transmits all the data associated with it, even if the variant references something complex, such as a string or a dynamic array. You can get pretty tricky when you marshal variants. Examine the following method implementation:

This method packs up a fairly complex data structure, which is depicted in Figure 6-3. A top-level variant array holds three elements: a string, a long, and a string array. When you assign the top-level variant array to a ByRef parameter, the universal marshaler sends the entire structure across the network and re-creates it on the other side. The client that calls this method must be able to deal with the complexities of the data structure, but you can see that it's still a powerful way to get lots of data across the network in a single round-trip. 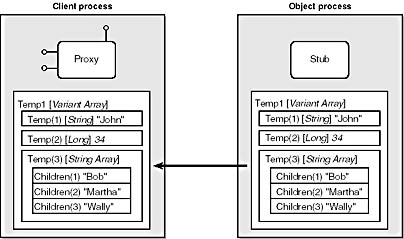 Figure 6-3. You can marshal this complex data structure in either direction using a single variant parameter or a variant return value. If you use techniques such as this, your code must be able to deal with the complexity on the client side as well as the object side.

In the equivalent IDL, shown below, you can see that each typedef has an associated GUID that identifies its data layout scheme. A UDT can hold any collection of variant-compliant data types.

After you define the UDT in a public class module, you can use it to define ByRef parameters of that type. For instance, you can create methods such as InitCustomer and GetCustomer that use the UDT to marshal data across the proxy/stub layer. Take a look at the following class definition for the CCustomer class:

As you can see, a UDT lets you move several pieces of related data across the wire using a single parameter. A client application can use the InitCustomer method like this:

A client can call the GetCustomer method like this:

As you can see, Visual Basic and the universal marshaler do an amazing amount of work for you behind the scenes. The benefit to you as a Visual Basic programmer is that you can use these special data types as if they were simple primitives. You can declare parameters of any of these data types and know that your data will be sent across the wire when the time is right.

C++ programmers, on the other hand, have it much harder. A C++ developer who wants to create components that will be used by Visual Basic programmers must also use BSTRs, SAFEARRAYs, and VARIANT types. These types aren't natural to a C or a C++ programmer. Many macros and convenience functions are available for dealing with these special types, but it takes most C++ programmers some time to get up to speed.