You can easily connect your Mac OS X computer to your LAN by configuring the Network window. If Fedora is configured as a DHCP server (see Chapter 23), your Mac OS X client can detect that. Or, you can configure your LAN interfaces manually, as follows:

The latest iMac computers have built-in Ethernet jacks that you can use to plug into your network hub. Plug your iMac into your LAN hub and you should be ready to use your Linux servers from Mac OS X.

AppleTalk is the traditional set of protocols used by Apple computers to share files and printers over a LAN. Although Mac OS X can support Samba file sharing, AppleTalk is still a familiar way for Mac users to get to networked printers and files.

Inside Fedora is a software package called netatalk that you can use to configure Fedora as an AppleTalk file and printer server. To a Mac client, the netatalk server looks no different than any other AppleTalk server.

To access a shared directory from an AppleTalk server, click Go in the Finder bar at the top of the screen, and then select Connect to Server. The Connect to Server window appears, as shown in Figure 26-2.

Figure 26-2:   In Mac OS X, see Samba and AppleTalk shares from the Connect to Server window.

Enter the address, as shown in Figure 26-2, or click the Browse button to see a list of available servers.

After you click Connect, a pop-up window appears, prompting for a user name and password. Use the Options window to set up your preferences for logging on to the server. You can have the password added to your keychain so you don't have to type it in each time you access the server. You can also select to send the password in clear text (which is the default) and be warned that you are doing that. The server determines whether you need to enter a clear-text or encrypted password (so if you send the wrong type of password, it will fail). You can also request a secure connection over SSH for your login (which is a good idea to prevent someone from sniffing out your password from the network). 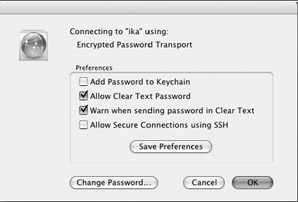 Figure 26-3:   Select authentication options when you connect to your AppleTalk (netatalk) server.

After the user name and password are accepted, an icon representing the AppleTalk share appears on your desktop. Double-click to open the shared directory. You can change the contents of that directory in any way that your login will allow.

Prior to Mac OS X, Mac clients accessed AppleTalk shares from the Chooser window. The procedure for accessing a netatalk (or other AppleTalk) server went something like this:

At this point, you can open the icon representing the shared directories and begin using the files and subfolders contained within.

In this example, smb tells Mac OS X that it is looking for a Samba share. The Samba server in this example is located at IP address 192.168.0.3 (you could use a NetBIOS name instead of an IP address here). The name of the share is toyprojects. You could also add the workgroup and user name to the command line. Here's an example that asks for a share named toyprojects on a server named toys, in the ESTREET workgroup, as the user named chris:

Here are a few things you should know about accessing Samba shares from Mac OS X:

Most UNIX-like computer systems rely on the X Window System (also referred to as X11 or simply X) to display graphically-based windows over a network. Sharing applications over the network with X requires little more than having X running and making it accessible to displays that are directed to your display (see Chapter 3 for information on launching X applications).

Although the default graphical interface for Mac OS X is a facility called Aqua, there is now an X11 for Mac OS X available for Mac users. The latest version of Mac OS X, nicknamed Panther, includes a native X installation. You must choose a Custom install or upgrade when you install Panther to get the X packages on your system. For further information on the state of the X Window System in Mac OS X, or to download your own copy of X11 for Mac OS X, go to www.apple.com/macosx/features/x11.