As an example, the TestEventSink application included on the companion CD includes an event sink that watches the events coming from the ATL message traffic control example in Chapter 10. Figure 12-4 shows the dialog box. 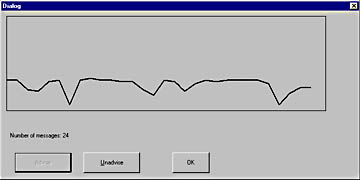 Notice that the sink class has methods for responding to the events the ATL message traffic control throws out. Unfortunately, no wizard support is available yet for reading a component's type information and manufacturing the callback interfaces. We had to define and implement OnExceededThreshold and OnNewInterval by hand. The event sink map correlates the callback functions with their DISPIDs (1 and 2, respectively). Also notice that the IDispEventImpl template takes the name of the callback interface (DIID_ _IATLMsgTrafficCtlEvents) and the name of the type library defining the callback interface (LIBID_ATLMSGTRAFFICLib). The event sink uses this information to load the control's type information. The sink class also includes a back pointer to the dialog (because the sink class updates the dialog box every time there's a new interval). Then the dialog class includes a pointer to the control's IUnknown pointer, a pointer to the sink, an ATL ActiveX window, and information about whether the dialog box is connected to the object.

Listing 12-6. Creating the control and connecting the sink to the control.

The only thing left to do is respond to the Advise and Unadvise buttons. The OnClickedAdvise function is called whenever the user presses the Advise button. The event sink class inherits a function named DispEventAdvise, which handles all the connection points for you (thank goodness!). Conversely, the OnClickedUnadvise function (called when the user presses the Unadvise button) disconnects the sink from the dialog box, at which point the dialog box stops receiving events. The following code shows how to connect and disconnect the dialog box and the advise sink: