RegMon, shown in Figure A-2, is a real-time registry monitor that displays the names of the applications accessing the registry, the keys that are being accessed, and the data that is being read and written. 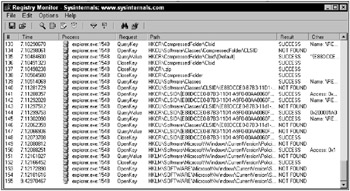 On a Windows .NET Server, RegMon takes advantage of the newer operating system registry callback mechanism to register for and receive information about registry accesses as they occur.

When RegMon sees an open, create, or close call, it updates an internal hash table that serves as the mapping between key handles and registry path names. Whenever it sees handle-based calls, it looks up the handle in the hash table to obtain the full name for display. If a handle-based access references a key that was opened before RegMon was started, RegMon will fail to find the mapping and will simply present the key’s value instead.

Use the Filter dialog, which is accessed through a toolbar button or the Options

Filter/Highlight menu selection, to select what data will be displayed. The ‘*’ wildcard matches arbitrary strings, and the filters are case insensitive. Only matches that are shown in the include filter, but not excluded with the exclude filter, are displayed. Use ‘;’ to separate multiple strings in a filter (e.g., “regmon;software”).

Wildcards allow for complex pattern matching, making it possible, for example, to match specific registry accesses by specific applications. The include filter “Winword*Windows” would have RegMon only show accesses by Microsoft Word to keys and values that include the word “Windows.”

Use the Highlight Filter option to specify the output that you want highlighted. Select highlighting colors with Options

RegMon can either timestamp events or show the time elapsed from the last time you cleared the output window (or since you started RegMon). The Options menu and the clock toolbar button enable you to toggle between the two modes. The button on the toolbar shows the current mode with a clock or a stopwatch. When showing duration, the Time field in the output shows the number of seconds it took for the underlying file system to service particular requests.

To edit a registry key or value shown in RegMon’s output, simply double-click the key or value (or use the Regedit toolbar button or the Edit

Regedit Jump menu option) and RegMon will open the registry editor and index that specific key or value.

If you stop scrolling, select an entry from the process of interest, right-click the entry, and select Include Process, RegMon will only show registry traffic initiated by that process. This is a great way to find out what your process, or a process under investigation, is doing.