Workloads generated from Internet or intranet sources can be very complex. Internet applications can generate transactions from simple reads to complex queries and updates of database structures. Built upon web software and providing interactive web services, many enterprise web-based workloads are almost entirely transactional in nature. However, within this transactional model much of the traffic is generated from the read-only access to web pages.

This plays into the strengths of the NAS model, which should provide storage for the rapidly growing number of web applications accessed only as read I/O and which are loaded on a remote client. Web servers provide the necessary infrastructure to redirect I/O to storage servers based upon a HyperText Transport Protocol (HTTP) universal resource locator address. Given that NAS boxes are able to speak HTTP, this client request along with the subsequent redirection from web indexing software can provide the requested web page, and thus free the web server for web transactional and indexing tasks .

In some cases, a web services provider may provide a heterogeneous set of servers for web service deployment. This is characterized by UNIX and Windows servers coexisting within the same data center. The inherent strength of providing heterogeneous support to both server operating environments through the NAS multiprotocol services allows us to use the NAS device as a storage solution for Web Services, given it speaks HTTP and other remote dialects (NFS, CIFs, and so on), as well as future file transfer technologies, such as the Direct Access File System.

NAS-WIT (Web Internet Transactional) workloads simply use the OS file system as the data organizational method. This provides a straightforward method of determining byte transfer rates for WIT I/Os given the format of web file structures. However, this must be augmented when considering the amount and type of delayed I/Os generated from redirected I/O transactions and asynchronous transactions (for example, messaging). Similar to the transactional structure of OLTP, the typical WIT I/O may be small but the random nature of arrival rates and unpredictability regarding the number of users provide a challenging configuration problem. In terms of NAS devices that are limited in their network and data path capacities per device, we are driven immediately into a multidevice configuration. Consequently, this requires a logical distribution of the total workload byte transfer rate among a set of NAS devices.

Defining user traffic is the most challenging part about estimating WIT workloads. In web-based processing environments, the classic time periods do not apply. This is especially true in retail-oriented web sites that rely on customer interaction for sales and are open 24/7. Providing adequate service levels across worldwide time zones makes attempts at estimating WIT workloads problematic .

The number of data paths, as with any workload, is key to the performance of WIT workloads. The influence of IP packet traffic becomes a defining factor in analyzing network interface capacities given the OLTP nature of the WIT workload. Given the rich I/O content of web transactions that continue to grow with text, image, and other unstructured data, a gigabit transmission may become the required transport, even though its a read-only environment. NAS I/O comprises only a portion of the overall response time factor; limiting network latencies with Gbe capacities helps bring the number of network paths and data paths into line.

Design and Configuration for Web-Based Workloads

Figure 19-5 shows an example of a mid-range NAS configuration supporting the web-based workload. 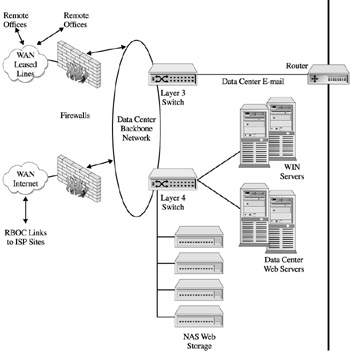