SQL Server can lock data using several different modes. For example, read operations acquire shared locks and write operations acquire exclusive locks. Update locks are acquired during the initial portion of an update operation when the data is read. The SQL Server lock manager acquires and releases these locks. It also manages compatibility between lock modes, resolves deadlocks, and escalates locks if necessary. It controls locks on tables, on the pages of a table, on index keys, and on individual rows of data. Locks can also be held on system data ”data that's private to the database system, such as page headers and indexes.

The lock manager provides two separate locking systems. The first system affects all fully shared data and provides row locks, page locks, and table locks for tables, data pages, text pages, and leaf-level index pages. The second system is used internally for index concurrency control, controlling access to internal data structures, and retrieving individual rows of data pages. It uses latches, which are less resource intensive than locks and provide performance optimization. You could use full-blown locks for all locking, but because of their complexity, they would slow down the system if they were used for all internal needs. If you examine locks using the sp_lock system stored procedure or a similar mechanism that gets information from the syslockinfo table, you cannot see latches ”you see only information about locks for fully shared data.

Another way to look at the difference between locks and latches is that locks ensure the logical consistency of the data and latches ensure the physical consistency. Latching happens when you place a row physically on a page or move data in other ways, such as compressing the space on a page. SQL Server must guarantee that this data movement can happen without interference.

The Lock Manager and Isolation Levels

SQL Server supports all four transaction isolation levels specified by ANSI and ISO: Serializable, Repeatable Read, Read Committed, and Read Uncommitted. (See Chapter 3 and Chapter 10 for details.) To achieve the Serializable isolation level, phantoms must be prevented because the transaction's behavior must be identical to what would have occurred had the transaction run on a single- user system. SQL Server provides serializability, which you can set using SET TRANSACTION ISOLATION LEVEL SERIALIZABLE. To support serializability, SQL Server locks index ranges using a special type of lock called a key-range lock. Such locks are held until the end of the transaction to prevent phantoms. If no index exists, the lock manager uses a table lock to guarantee serializability.

For a lower isolation level, such as Committed Read, locks can be released sooner ”when the use of the object is completed. For example, if a range of data is being queried in the table, there will probably be shared locks outstanding. With Committed Read isolation, a shared lock is released as soon as the scan moves off one piece of data and onto the next . Exclusive locks, on the other hand, are always held until the end of the transaction so that the transaction can be rolled back if necessary.

With Serializable or Repeatable Read isolation, shared locks must be held until the end of the transaction to guarantee that the data that was read will not change or that new rows meeting the criteria of the query cannot be added while the transaction is in progress. Like shared locks, latches are not tied to the boundaries of a transaction because they are used to provide mutual exclusion (mutex) functionality rather than to directly lock data. For example, during a row insert in a table with a clustered index, the nearby index page is latched to prevent other inserts from colliding . The latches are needed to provide mutual exclusion only during long periods of time (that is, periods with more than a few instruction cycles).

For shorter- term needs, SQL Server achieves mutual exclusion using a latch, implemented with a spinlock. Spinlocks are used purely for mutual exclusion and never to lock user data. They are even more lightweight than latches, which are lighter than the full locks used for data and index leaf pages. The spinlock is the only place in SQL Server in which processor-specific assembly language is used. A spinlock is implemented in a few lines of assembly language specific to each processor type (such as x 86/Pentium or Alpha). The requester of a spinlock repeats its request if the lock is not immediately available. (That is, the requestor " spins " on the lock until it is free.)

Spinlocks are often used as mutexes within SQL Server when a resource is usually not busy. If a resource is busy, the duration of a spinlock is short enough that retrying is better than waiting and then being rescheduled by Microsoft Windows NT, which results in context switching between threads. The savings in context switches more than offsets the cost of spinning, as long as you don't have to spin too long. Spinlocks are used for situations in which the wait for a resource is expected to be brief (or if no wait is expected).

NOTE A simple wait for a lock is not a deadlock. When the process that's holding the lock completes, the waiting process gets the lock. Lock waits are normal, expected, and necessary in multiple-user systems. 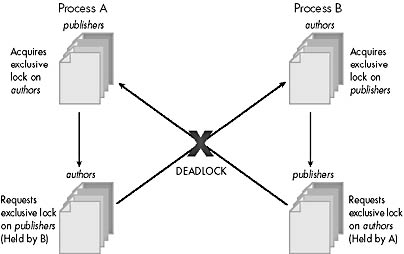 Figure 13-1. A cycle deadlock resulting from each of two processes holding a resource needed by the other.

Figure 13-2 shows an example of a conversion deadlock. Process A and process B each hold a shared lock on the same page within a transaction. Each process wants to promote its shared lock to an exclusive lock but cannot do so because of the other process's lock. Again, intervention is required.

SQL Server automatically detects deadlocks and intervenes through the lock manager, which provides deadlock detection for regular locks. Latches are not involved in deadlock detection because SQL Server uses deadlock-proof algorithms when it acquires latches. When SQL Server detects a deadlock, it terminates one process's batch, rolling back the transaction and releasing all that process's locks to resolve the deadlock.

This LOCK_MONITOR thread checks for deadlocks by inspecting the list of waiting locks for any cycles, which indicate a circular relationship between processes holding locks and processes waiting for locks. Typically, the process chosen as the victim is the process that has just requested a lock and initiated the check for deadlocks. If a deadlock is encountered during the normal execution of the lock monitor, the first process whose termination will break the deadlock cycle is typically chosen as the victim. However, certain operations are marked as golden, or unkillable. For example, a process involved in rolling back a transaction cannot be chosen as a deadlock victim because the changes being rolled back could be left in an indeterminate state, causing data corruption.

Figure 13-2. A conversion deadlock resulting from two processes wanting to promote their locks on the same resource within a transaction.

In SQL Server 6.5, the lock manager checked for deadlocks every time a process began waiting for a lock resource. This provided rapid deadlock detection, but it wasted a lot of resources looking for deadlocks even in systems or situations in which they were rare. In earlier SQL Server releases, other algorithms were used to choose the deadlock victim (such as choosing the process that had consumed fewer CPU cycles). Those algorithms made a noble attempt at fairness, but they often resulted in another deadlock because yet another process might have been queued up for the resource that was part of the deadlock circular chain of lock requests. The result would be a chain reaction.

NOTE The lightweight latches and spinlocks used internally do not have deadlock detection services. Instead, deadlocks on latches and spinlocks are avoided rather than resolved. Avoidance is achieved via strict programming guidelines used by the SQL Server development team. These lightweight locks must be acquired in a hierarchy, and a process must not have to wait for a regular lock while holding a latch or spinlock. For example, one coding rule is that a process holding a spinlock must never directly wait for a lock or call another service that might have to wait for a lock, and a request can never be made for a spinlock that is higher in the acquisition hierarchy. By establishing similar guidelines for your development team for the order in which SQL Server objects are accessed, you can go a long way toward avoiding deadlocks in the first place.

In the example in Figure 13-1, the cycle deadlock could have been avoided if the processes had decided on a protocol beforehand ”for example, if they had decided to always access the customer table first and the parts table second. Then one of the processes would get the initial exclusive lock on the table being accessed first, and the other process would wait for the lock to be released. One process waiting for a lock is normal and natural. (Remember, waiting is not a deadlock.)

By the way, the time that your process holds locks should be minimal so other processes don't wait too long for locks to be released. Although you don't usually invoke locking directly, you can influence locking by keeping transactions as short as possible. For example, don't ask for user input in the middle of a transaction. Instead, get the input first and then quickly perform the transaction.

Locks are not on-disk structures ”you won't find a lock field directly on a data page or a table header ”because it would be too slow to do disk I/O for locking operations. Locks are internal memory structures ”they consume part of the memory used for SQL Server. Each locked data resource (a row, index key, page, or table) requires 32 bytes of memory to keep track of the database, the type of lock, and the information describing the locked resource. Each process holding a lock also must have a lock owner block of 32 bytes. Sometimes a single transaction can have multiple lock owner blocks; a scrollable cursor sometimes uses several. Also, one lock can have many lock owner blocks, as in the case of a shared lock. Finally, each process waiting for a lock has a lock waiter block of another 32 bytes.

NOTE In this context, we use the term "process" to refer to a SQL Server subtask. Every user connection is referred to as a process, as are the checkpoint manager, the lazywriter, the log writer, and the lock monitor. But these are only subtasks within SQL Server, not processes from the perspective of Windows NT, which considers the entire SQL Server engine to be a single process with multiple threads.