UMDF  From the perspective of the Windows I/O manager, the target of an I/O request must be a WDM device object. These objects reside in the kernel-mode address space and are not accessible to user-mode drivers. A key requirement for UMDF is a secure way to bridge the gap between user mode and kernel mode and to deliver the I/O requests to a user-mode driver. This requirement is handled by the following major elements of the UMDF infrastructure:

Figure 4-2 shows the components that make up the UMDF infrastructure and the associated driver. Microsoft provides most of the components in this diagram. The primary exception is the UMDF driver or drivers and sometimes the lower device stack, which a hardware vendor might implement. 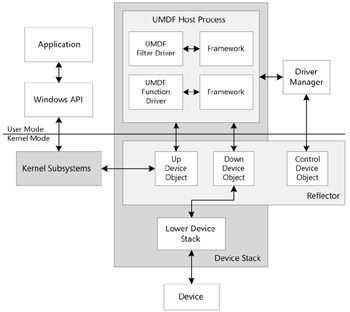 The rest of this section provides a brief introduction to the components that make up the UMDF infrastructure, starting from the top of Figure 4-2.

Wudfhost hosts the components that comprise the user-mode part of the device stack and mediates communication between those components and the reflector. Each UMDF stack has its own host process. The following are the principal hosted components:

Wudfhost is a child of the driver manager process. Although it is not a Windows service, Wudfhost runs with the security credentials of a LocalService account.

Tip  See "Service User Accounts" on MSDN for more information on LocalService and other accounts-online at http://go.microsoft.com/fwlink/?LinkId=82318.

Sometimes we use WUDF as the acronym, sometimes we use UMDF, and then sometimes KMDF is just WDF. It's an unfortunate side effect of when the KMDF and UMDF projects started. Originally there was just "WDF"-the Windows Driver Framework. Then the Windows User-Mode Driver Framework came along. For a while there was also a Windows Kernel-Mode Driver Framework. Finally we settled on KMDF and UMDF, but by that point the older acronyms were already cemented in the code base.-Peter Wieland, Windows Driver Foundation Team, Microsoft

Why Use Side Objects?

A similar issue happens with device removal. The PnP manager won't issue a remove request to a device stack until the last handle to it has been closed. But if we closed that handle, the user-mode driver wouldn't have been able to send commands to the device during removal.

We could have built an internal interface that would let us send I/O requests early, but that wouldn't work with ReadFile and WriteFile and would create a compatibility problem. The side object solves this problem quite elegantly. Because it's not in the device stack, we can open it whenever we want. The reflector blocks any I/O from non-host processes, so no one else can open or use the side object, and the driver can use the same APIs to access the object during start and remove that it would any other time.-Peter Wieland, Windows Driver Foundation Team, Microsoft

When the framework stops a driver because of a fatal error, it terminates only the driver host process; other processes and the system itself can continue. A great benefit of running in user mode is that a driver can access only its own address space, not the kernel address space. As a result, a fatal driver error does not affect kernel memory, so it crashes only the driver process, not the entire system.

When a UMDF driver fails, the reflector completes any outstanding I/O requests with an error status, and it sends a notification to any applications that have registered to receive such notices. Windows logs the failure and tries up to five times to restart this instance of the device. If the device cannot be restarted, the system disables the device and, if no handles are open to any device objects in the device stack, unloads the associated kernel drivers in the device stack.

Tip  See "Handling Driver Failures" in the WDK for more information on how to handle fatal errors in UMDF drivers-online at http://go.microsoft.com/fwlink/?LinkId=79794.

An application opens communication with a UMDF driver by using the device interface to obtain the device's symbolic link name and then calling CreateFile to obtain a device handle. The application uses the handle to send I/O requests to the driver. The application is typically not aware that it is using a user-mode driver, because the procedure for obtaining a device handle and sending I/O requests to a device works exactly the same way for a UMDF driver as for a kernel-mode driver.

A typical UMDF I/O request, such as a read or device I/O control request, takes the following path: