Figure 4-1 shows a conceptual view of the WDF architecture. 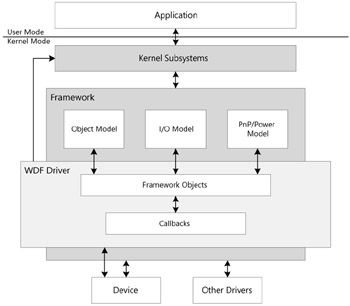 In UMDF one of our main goals was that an application shouldn't be able to tell the difference between a user-mode and a kernel-mode driver. This is a big win over some of the other device class-specific user-mode models, which apply only to a particular type of device and which require applications to be modified before they can use the driver.

We weren't able to keep the transparency everywhere. For example, we allow all three transfer modes for I/O controls, but we can't provide client address space access to the driver, so some aspects of direct and neither I/O aren't available. We added a new status code that can be returned from an I/O operation to tell the application that the driver process terminated while handling the I/O. To enable impersonation, the application must change the way it calls CreateFile to allow the driver to impersonate the user. But aside from this, a UMDF driver should be indistinguishable from a KMDF driver from the application's point of view.-Peter Wieland, Windows Driver Foundation Team, Microsoft

These subsystems-I/O manager, PnP manager, and so on-are the same as those that interact with WDM drivers. From the perspective of these subsystems, the framework is a WDM driver that is represented by a WDM device object. The services receive requests from applications and use IRPs to communicate the requests to the framework. When the request is complete, the services return the results to the application.

The framework includes the following three key models, which govern how most driver tasks are handled:

When to Implement a Callback

I always like to say that WDF's default handling for events will provide you with a perfectly functional driver all on its own. You only need to override that default behavior if you want to make the driver do something interesting.-Peter Wieland, Windows Driver Foundation Team, Microsoft

Drivers must often communicate with their device or other drivers, for example: