KMDF  KMDF operates as an abstraction layer over WDM. Because both the framework and associated drivers run in kernel mode, the infrastructure is much simpler than that of UMDF. Figure 4-3 shows the components that make up the KMDF infrastructure. As an example, the figure shows a simple device stack, consisting of a KMDF function driver, a WDM lower filter driver, and a WDM bus driver. 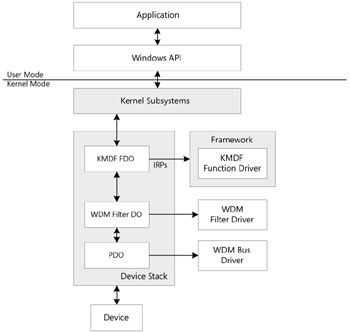 The KMDF infrastructure is made up of several components: the framework, the KMDF drivers, and other drivers.

Each KMDF driver calls the framework to create a framework device object for each device that the driver supports. The framework, in turn, creates a corresponding WDM device object and installs it in the device stack for the device. If the KMDF driver is a function driver, the framework creates an FDO and installs it above any lower filter drivers, and so on. Because the upper and lower edge of a KMDF driver operate as a WDM driver, it is therefore possible for a device stack to include a mixture of KMDF and WDM drivers.

The KMDF model is somewhat similar to the port-miniport model, with the framework acting as the port driver and the KMDF driver acting as a miniport driver. The framework's device object is installed in the device stack, and the framework handles many of the functions of a driver. However, the framework depends on the associated KMDF driver for device-specific processing. There is one major difference between the port-miniport model and KMDF though; KMDF does not restrict the DDI routines that a driver can call or how the driver operates.

The device stack can be made up of multiple drivers, any or all of which can be KMDF drivers. The example in Figure 4-3 shows a KMDF function driver installed over a WDM lower filter driver. However, it could just as easily be two KMDF drivers or a WDM function driver over a KMDF lower filter driver. The IRPs move through the stack as usual, and the framework creates corresponding framework request objects when the IRPs reach a KMDF-related device object.

When the framework stops a driver because of a fatal error, the system has been irretrievably compromised, so the framework generates a bug check and crashes the system. All framework bug checks use the code WDF_VIOLATION and have four parameters. The first parameter indicates the specific type of error, and the additional parameters provide more information about the error.

An application opens communication with a KMDF driver by using the device interface to obtain the device's symbolic link name and calling CreateFile to obtain a device handle, just as an application would do for other types of drivers. A typical I/O request takes the following path: