The Windows I/O model governs how the system and associated drivers handle I/O requests. The model encompasses more than data transfers to and from a device-it operates as a general packet-based mechanism that handles communication between the clients who issue the requests and the device stack. Clients include applications, kernel subsystems such as the PnP manager, and the drivers themselves.

All Windows I/O requests are carried by I/O request packets (IRPs). In addition to carrying I/O-related requests that applications send to drivers-read, write, create, and so on-IRPs are also used to carry Plug and Play requests, power management requests, WMI requests, notifications of changes in device status, and queries about device and driver resources.

Applications typically access a device synchronously. For example, when an application requests that a driver read some data from a device, the application waits for the data to be returned and then uses the data for some computation. The application then requests more data, does more computation, and so on until all the data has been retrieved.

From the perspective of drivers, however, Windows I/O is inherently asynchronous. For example, when the driver receives a read request from an application, the driver simply returns the requested data if it can do so quickly. However, sometimes read requests require a significant amount of time to satisfy. If so, the driver starts the necessary operation and informs the I/O manager that the request is pending. In the interim, the driver is free to process additional requests.

Eventually, the device signals the driver that the read operation is complete. The driver informs the I/O manager, which notifies the application, and the application can then process the data. Asynchronous I/O can significantly boost the performance of multithreaded applications, because the application does not waste time or threads waiting for time-consuming I/O requests to be completed.

Occasionally the question comes up about how a driver can tell if an application wants asynchronous or synchronous I/O. Part of the beauty of the Windows I/O model is that you don't need to know, because you can go through the same steps in either case. If the data is available immediately, then complete the request right away. Otherwise, start the process of retrieving the data (running the command, writing the data, and so on) and return control to the I/O manager. In many ways, this reduces the complexity of the device driver.-Peter Wieland, Windows Driver Foundation Team, Microsoft

The Windows I/O model reflects the layered architecture shown in Figure 2-1. The most common clients of drivers are user-mode applications, which issue I/O requests by obtaining a handle for the device and calling an appropriate Windows function. The request propagates downward through the system until it reaches the driver and eventually the device. The system then returns any response to the application.

The following are the most common types of I/O requests:

The standard Windows functions that applications use to issue these I/O requests are WriteFile, ReadFile, and DeviceIoControl, respectively.

Tip  See "Device Management" in the WDK for information about how an application obtains a device handle-online at http://go.microsoft.com/fwlink/?LinkId=82273.

How a Device Stack Handles IRPs

When a client sends an I/O request to a device, the I/O manager packages the request and related information such as data buffers into an IRP. The I/O manager locates the pointer to the appropriate dispatch routine in the top device object in the stack and calls the routine and passes the IRP to the associated driver for processing. Figure 2-4 shows how the device stack handles the IRP. 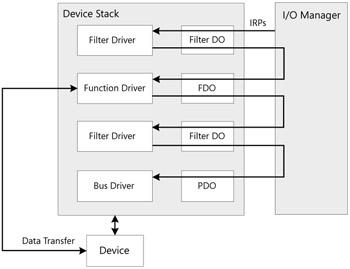 If the top driver can satisfy the IRP, it directs the I/O manager to complete the request. This action returns the IRP to the I/O manager, which in turn passes any requested data back to the client. However, a driver cannot always satisfy a request by itself. In that case, the driver processes the IRP as required and then directs the I/O manager to pass the IRP to the next lower driver in the device stack. That driver does what it can to satisfy the request, and so on. For example, a filter driver might modify a write IRP, but then it must pass the IRP down the stack so that the function driver can transfer the data to the device and complete the request. Sometimes IRPs must be passed all the way to the bus driver.

When a driver passes a request down the stack, some additional processing might be required after the request has been completed but before it is returned to the client. If so, a driver can optionally set an I/O completion routine before calling the I/O manager to pass the IRP to the next driver. When the request is finally completed, the I/O manager calls any completion routines in the opposite order in which they were set; that is, it "unwinds" back up the device stack.

Chapter 8, "I/O Flow and Dispatching," provides a discussion of the I/O process.

Usually, the driver does not care what data is in the buffers, it just needs to transfer the bytes to or from the device. Drivers access the data buffers that are associated with an IRP in one of the following ways:

The following three transfer types have varying degrees of risk:

Chapter 8, "I/O Flow and Dispatching," provides a discussion of how to perform I/O by using each of these transfer mechanisms.

How to Transfer Data to or from a Device

Many I/O requests require the driver to transfer data to or from a device. Typically, data transfer is handled by the device's function driver. When the transfer is complete, a device typically signals an interrupt to notify the driver. At the most general level, an interrupt notifies the system about an event that must be dealt with immediately. The name derives from the fact that the system must interrupt normal thread processing to immediately deal with the event.

The details of the data transfer process depend on the type of device: