The commands of unconditional jumps and function calls have a complex nature and require a large number of processor microoperations. These are needed for forming the executable addresses, rearranging the command pipeline, especially if the code contains a chain of such commands.

What affects performance greatly is that the unconditional jump commands may force out other jump commands from the special processor memory buffer that stores the jump addresses available. This buffer, called Branch Target Buffer (BTB), has an extremely important role in organizing the branches and jumps in the program. The algorithm for replacing the unused buffer commands is based on random selection, and this may cause a considerable delay in programs containing a lot of branches.

To reduce the number of unconditional jumps and branches, you can rearrange the structure of the program code. Each specific case will have an individual solution, but still, there are some general guidelines:

As an example, we will optimize the code for a function (we will call it myproc ), containing the following sequence of commands:

This code fragment may be replaced by a more efficient one (with the changes shown in bold):

The jmp ex command, performing a jump to the label where the program exits the myproc function, is replaced by the ret command. The use of the other ret commands is determined by the function algorithm.

If you need to call a function (or procedure) from within another one, it is highly recommended that you avoid the so-called double return. This would eliminate the need for manipulations with the stack pointer, which present an obstacle to the processor prediction mechanism. For instance, it is a good idea to replace such function call command as

by the unconditional jump command: jmp myproc . In this case, the return from the main function would be performed by the ret command of the myproc procedure. Such manipulations may seem difficult to understand, so we will use an example to explain these matters in more detail.

We will now use C++ .NET to develop a simple console application that will contain a call of an assembly function (say, fcall ). The fcall function calculates the difference between the two integers (the i1 and i2 variables in the main program), and then calls the mul3 function that multiplies this difference by 3. This result is returned to the main program and displayed on the screen.

Listing 1.16 shows the source code of the non-optimized assembly module intended for compiling in the macroassembler environment MASM 6.14.

The i1 and i2 variables are transferred through the stack. We find the difference between them and place it to the EAX register. These operations are performed by the following commands:

Then we call the mul3 function that multiplies the result in EAX by 3. Note that we use the call command to call the mul3 function. To return to the main C++ program, the two ret commands are used. Now, we will optimize the assembly code as shown in Listing 1.17 (the changes are marked in bold).

Listing 1.17: The optimized variant of the assembly code with two functions

As you can see from the listing, the call _mul3 command has been removed, and the pop EBP command is now placed before the jump to the procedure label. Before the jmp _mul3 command is performed, the stack contains the address for returning to the main program. After multiplying the contents of the EAX register by 3, there is a return, performed by the ret command of the mul3 function.

Listing 1.18: A console application that displays the results of the fcall function

Fig. 1.2 illustrates the window with this application running. 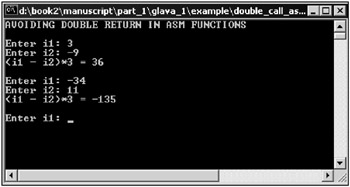 Another method for eliminating redundant unconditional jumps is to repeat the needed code fragment at the point where you run into the jmp command. We will consider a practical example.

Suppose you have an array of integers. The task is to select all its positive numbers and save them in one array, and also to select all the negative numbers and save them in another array. Suppose the original array contains 8 elements. To simplify the task, suppose that half of the numbers are positive, and half are negative. So, the two supplementary arrays have the dimension of 4. In Listing 1.19, you can see the source code of the assembly function that performs the required manipulations.

Listing 1.19: Selecting the positive and negative numbers out of the array (non-optimized version)

In this code fragment, the optimization can be achieved by eliminating the unconditional jump command ” jmp next (shown in bold). Instead of this command, you can repeat the needed code fragment. The source code of the modified version of the program is shown in Listing 1.20.

Listing 1.20: Selecting the positive and negative numbers out of the array (optimized version)

The changes made to the original program are shown in bold. As you can see from the original listing, removing the jmp next command required us to insert several commands from the common branch, which is marked as next in Listing 1.19.

There is another important note concerning loop calculations. The existing loop commands and their modifications ( loope , loopne , loopz , loopnz ) slow down the overall performance of the program and are indeed an anachronism to the modern processor models. To create fast applications, it is better to replace them with the combination of cmp/jmp commands.

For example, the loop that uses the ECX register as a counter and contains the loop command (one of the most frequently used) is the least efficient:

There are two drawbacks to this loop. First, the loop command cannot be optimized by the processor well enough, and further, only the ECX register can be used as the loop counter. The second disadvantage is that the ECX register is decremented by 1, making it difficult to unroll the loop by expanding to the next step.

You can replace the loop command with the following sequence:

In this code fragment, you can decrement the ECX counter by a value other than 1, which provides you with certain options for optimizing the code.

A somewhat worse variant, yet faster than the one with the loop , may look like this:

In this case, you need to use the cmp command to check the loop exit condition, and this requires additional processor cycles. This loop is easy to unroll, too.