Time synchronization is core to many of the operations within Windows 2000. If systems aren't properly synchronized, many of the network facilities will fail. In this lesson, you'll learn about the importance of keeping your network fully synchronized.

Time problems can have more devastating effects on servers because many of its functions will fail to work, as shown in Figure 11.15. 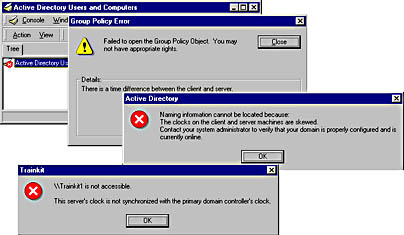 A Detailed Examination of the Windows Time Service

One of the startup processes for a Windows 2000 system is ensuring that it's synchronized with the rest of the forest. You should be aware of three processes: what occurs at boot time, how frequently time checks are made, and which systems are being used to obtain an accurate time. These systems are known as inbound time partners.

At boot time, a Windows 2000 system will contact an authenticating domain controller. Packets are exchanged to determine the latency of communication between the client computer and the domain controller. W32Time will then determine what current time should be converged to locally (the target time).

Once the target time has been decided, the Windows 2000 client will adjust the local (client) time according to the following scheme:

To ensure that the time is as accurate as possible, the time server client will periodically contact its inbound time partner for the time. The interval at which the time is checked can change depending on the following process:

When deciding which machine to synchronize their times with, Windows 2000 computers use the following hierarchy by default:

Following this hierarchy, the PDC emulator at the root of the forest becomes authoritative for the enterprise and can be configured to gather the time from an external source.

You can configure your time service by editing the registry. The W32Time parameters are held in the registry location Hkey_Local_Machine\System\ CurrentControlSet\Services\W32Time\Parameters.

Some useful values are listed in the following sections.

AvoidTimeSyncOnWan will prevent the computer from synchronizing with a computer that's in another site. The registry listing is shown below.

Period is used to control how often the time service synchronizes. The registry listing is shown below.

ReliableTimeSource is used to indicate that this computer has a reliable time. The setting is useful only on a domain controller and is generally used if the domain controller has been synchronized with an external source. The registry listing is shown below.

Type is used to control how a computer synchronizes. The registry listing is shown below.

NtPServer is used to manually configure the time source. Set this to the DNS name or IP address of the Network Time Protocol (NTP) server to synchronize from. Specify only one DNS name or IP address. You can modify this from the command line by using the Net command (for example, Net Time \\computername /setsntp:name of NTP server). The registry listing is shown below.

Your Windows NT 4.0 domain controllers also don't understand the Windows 2000 Windows Time Service and there might be critical network replication operations such as file and folder replication and Microsoft Exchange Server 2000 server replication that depend on having an accurate time before updating the system. There are several articles in the Microsoft Knowledge Base at www.microsoft.com/technet that can help you with these concerns.

In situations in which a server or client is out of date with the server for whatever reason, an administrator can run the net time command to correct the aberration. The following scenario examines a time-related problem in which a client is unable to log on to the domain because the system clock is out of sync with the domain.