The DataView in Connected Environments

In Chapter 3, you learned how a DataView is useful to sort, filter, and view data based on different selection criteria. You also saw how to add, edit, and delete data from a DataView. In Chapter 3, you saw all of this in disconnected data. Also, you created DataView objects from DataTable objects. In the following sections, you'll see how to work with DataView objects in a connected environment. You'll also learn how to search and sort data based on criteria and how to create different views of the same data.

The main features of a DataView is that it's easily bound to controls, and it provides filter and sort properties, which allow you to create different views of the same data. To see how to use DataViews, let's create a Windows application. After creating a Windows application, you'll add two DataGrid controls, four TextBox controls, two CheckBox controls, and a Button control and arrange them as shown in Figure 4-7. The Load Data button loads data from the Northwind SQL Server database's Orders table. 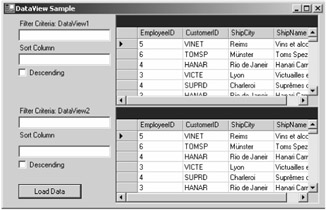 Now, if you enter the filter and sort criteria from both DataGrid controls, the data is filtered and sorted based on the criteria. For example, Figure 4-8 shows the criteria and the result of clicking the Load Data button. 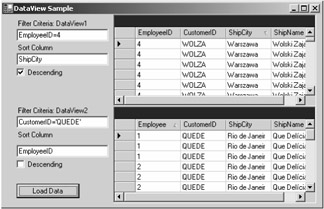 Listing 4-42 shows the code of the Load Data button's click event handler. As you can see, the code creates two different DataView objects from the DataSet and sets their RowFilter and Sort properties based on the data entered on the form. In the end, you bind each DataView object to a separate DataGrid control.

Transactions and Concurrency in ADO.NET

For example, say you have an application with two tables: Inventory and Orders. When a customer places an order, the Inventory table needs to be reduced. Now imagine that updating the Orders table was successful, but updating the Inventory table failed. This scenario leads to data inconsistency. To maintain the integrity of data, you could package both commands into a single transaction. If one table updated successfully and the other table didn't, the transaction could be rolled back; otherwise, the transaction could be committed.

To prevent data inconsistency, it's important to provide some kind of mechanism so other users can't update data when a user is already using that data. The mechanism to deal with this situation is called concurrency control. Concurrency is the method by which multiple clients can access and update the same data simultaneously without being concerned that they're forcing data redundancy and inconsistency.

There are three common ways to manage concurrency:

The ADO.NET model assumes that optimistic concurrency is the default concurrency model because of the disconnected nature of data in ADO.NET. A user reads data in a DataSet through a DataAdapter, and data is available to a user as a local copy of the data. The server database is available to all other users.

Another way of handling optimistic concurrency that you may be familiar with is by checking to see if a timestamp on the data source row has changed or the row version number has changed on the row being updated.

The data providers don't really support pessimistic locking on the database because the connection to the database is not kept open, so you must perform all locking with business logic on the DataSet.

The Sql data provider provides some additional methods for dealing with transactions involving savepoints (which may not be available in all data providers). Savepoints allow you to roll back to a "bookmarked" point in the transaction. Table 4-17 describes these methods.

Finally, you assign a new SQL Insert to the Command text and save the current transaction savepoint before executing the query. This Insert puts Fred into the database.

By rolling back to the second savepoint, it's as if the second and third ExecuteNonQuery calls never happened, so the first ExecuteNonQuery that puts Tim in the database is the only one that actually gets committed. If there's an exception, then you can roll back the whole transaction.