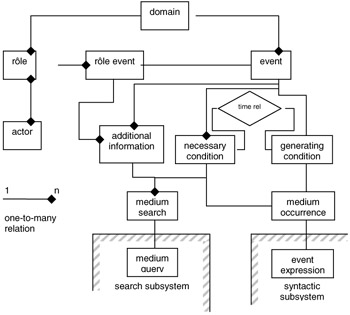 The general concept of role event goes, obviously, beyond the organisation of video: in this scenario role events are focal points for the aggregation of information that can be contained in a variety of media and derived from a variety of sources.

The conditions that lead to the instantiation of an event are, in this case, simpler since in general it is convenient to implement the more complex event composition rules in the syntactic layer.

The semantic level is, however, the ideal location for more "fuzzy" specifications of the time relations between events. For instance, the specification that event E2 should take place "shortly after" event E1 should be made into this semantic layer and translated into a suitable time bound for the syntactic layer.

In order to exemplify the matter, I will assume here that all the syntactic events, once detected, are stored in a database that the semantic layer can query. In the example above, then, part of the role of the gift shop manager could be specified as follows:[7]

The detection rule looks for purchase videos that coincide with high value transactions (the predicate "coincide" matches two times within a certain error). One association of this event is shown: it looks for all the video fragments of the visit that the same person who bought the souvenirs made to the gallery.

[7]I am using a notation based on XML and interspersed with some SQL query only because these two formalisms are very well known and, I believe, self-explanatory. They are by no means the only or even the best choice.