The general wireless system architecture, which includes connections to the Internet, is shown in Figure 1.8. [4] A wireless device is connected to a base station through one of the wireless Internet networks (see Section 1.4.1); the base station is wired to a telecommunications switch. In 2.5G systems, the telecommunication switch is used to send voice calls through the circuit-switched telephone network, and data through the packet-switched Internet. However, 3G systems use the packet-switched Internet for both voice and data. 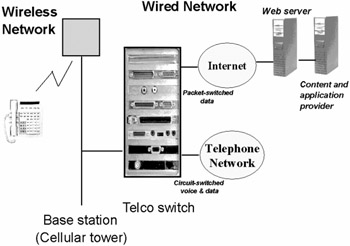 The main difference between these networks is in the range they cover. Wireless PANs and LANs operate on unlicensed spectrum; wireless WANs are licensed, well-regulated public networks. They can all be used as access networks to the Internet, as discussed in Section 1.4.2.

Wireless PANs have a very short range of up to 10 meters. They are used to connect mobile devices to send voice and data in order to perform transactions, data transfer, or voice relay functions. They are used in personal computers to replace keyboard and printer cables and connectors. Two popular technologies for wireless PANs are infrared (IR) and Bluetooth technologies. Infrared devices use IRDA standard and are used to transmit data among a variety of devices, including cell phones, notebooks, personal digital assistants, digital cameras, and others.

Wireless LANs are used to substitute fixed LANs in the range of about 100 meters. They are used in office buildings and homes to connect devices using a wireless LAN protocol. Typically, wireless LANs have a fixed transceiver, which is a base station that connects the wireless LAN to a fixed network. Popular wireless LANs include DECT, home RF, and 802.11 networks.

DECT is a standard for cordless phones that operate in the frequency range from 1880 to 1900 MHz in a range of 50 meters. It is based on TDMA technology. Home RF network is used to connect home appliances. It uses SWAP (Shared Wireless Access Protocol), which is similar to DECT, but carries both data and voice. It supports up to 127 devices in the range of about 40 meters. 802.11 is a standard developed for wireless LANs that cover an office building or a group of adjacent buildings. Standard 802.11b (a revision of an original 802.11 standard) subdivides its frequency band of 2.4 to 2.483 GHz into several channels. Its specification supports direct sequence spread spectrum technique.

Wireless WANs are licensed public wireless networks that are used by Web cell phones and digital modems in handheld devices. With a single transceiver (also called base station or cellular tower), the range is about 2500 meters; however, wireless LANs usually have multiple receivers that make their range practically unlimited. The most popular wireless WANs are cellular networks that consist of multiple base stations positioned in a hexagon (see Figure 1.9). Cellular networks can be classified as mobile phone networks that primarily carry voice, and they typically use circuit switching technology, and packet data networks that primarily carry data and use packet-switching technology. 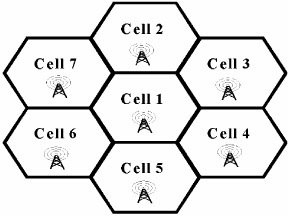 Figure 1.9: Cellular network is a wireless LAN that has multiple base stations positioned in a hexagon.

A typical wireless device that has one radio and one antenna can either connect to a public, cellular phone network (WAN), to a private wireless LAN, or to a PAN. However, all these devices can connect to the wireless Internet. One of the recent trends is that some wireless devices have multiple antennas, and thus, multiple air interfaces. This approach allows the devices to connect to various wireless networks in order to optimize coverage.

Figure 1.8, presented earlier in this section, is a typical wireless Internet topology that consists of a wireless and fixed network. This architecture can be further expended into a star topology, shown in Figure 1.10. [5] In this topology, a centralized radio network controller (RNC) is connected by point-to-point links with the base stations that handle connectivity for a particular geographic area or cell. RNCs are interconnected to allow mobile users to roam between geographical areas controlled by different RNCs. RNCs are further connected to a circuit-switching network for voice calls (in 2G and 2.5G systems), and to a packet-switching network for data and access to the Internet. One of the drawbacks of this architecture is that the RNC presents a single-point-of-failure; therefore, if an RNC fails, the entire geographical region will lose service. This problem is addressed in Kempf and Yegani, [6] and some new architectures for future 4G generation of wireless systems are proposed. 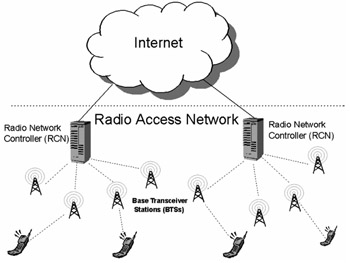 Figure 1.11 illustrates a network topology that includes a combination of wireless PANs, LANs, and WANs, all connected to the Internet through base stations and fixed networks. Some devices, such as one denoted in Figure 1.11 as the MAI (multiple air interfaces) device, can be connected to several wireless networks, including a satellite network. Multiple air interfaces in this case can complement each other to provide optimized coverage of a particular area. 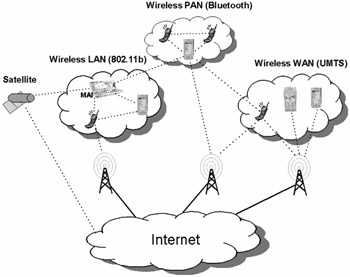