You are building a Web application in ASP.NET and you want to take advantage of the event-driven nature of ASP.NET by using the built-in page controller.

The concepts described in the Page Controller pattern are implemented in ASP.NET by default. The ASP.NET page framework implements these concepts in such a way that the underlying mechanism of capturing an event on the client, transmitting it to the server, and calling the appropriate method is automatic and invisible to the implementer. The page controller is extensible in that it exposes various events at specific points in the life cycle (see “Page Life Cycle,” later in this pattern) so that application-specific actions can be run when they are appropriate.

For example, assume the user is interacting with a Web Forms page that contains one button server control (see “Simple Page Example,” later in this pattern). When the user clicks the button control, an event is transmitted as an HTTP post to the server, where the ASP.NET page framework interprets the posted information and associates the raised event with an appropriate event handler. The framework automatically calls the appropriate event handler for the button as part of the framework’s normal processing. As a result, you no longer need to implement this functionality. Furthermore, you can use the built-in controller, or you can replace the built-in controller with you own customized controller (see Front Controller).

The following list contains the most common stages of the page life cycle in the order in which they occur. It also includes the specific events that are raised and some typical actions that could be performed at the various stages in the processing of the request:

The first example is a simple page that takes input from the user and then displays the input on the screen. The example illustrates the event-driven model that ASP.NET uses to implement server controls. 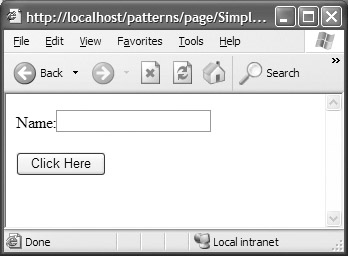 When the user types his or her name and then clicks the Click Here button, the name appears directly below the button, as shown in Figure 3.11. 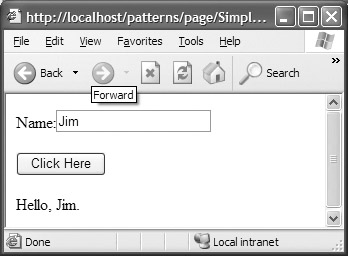 In ASP.NET pages, the user interface programming is divided into two distinct pieces: the visual component, or view, and the logic, which is a combination of the model and the controller. This division separates the visible portion of the page (the view) from the code behind the page with which the page interacts (model and controller).

The logic for the Web Forms page consists of code that you create to interact with the form. The programming logic resides in a file that is separate from the user interface file. This file, referred to as the code-behind file, is named SimplePage.aspx.cs:

The purpose of this code is to indicate to the page controller that when the user clicks the button, a request will be sent back to the server and the SubmitBtn_Click function will be executed.

This implementation shows how simple it is to connect to the events that the controller provides. It also illustrates that code written in this fashion is easier to understand because the application logic is not combined with the low-level code that manages the event dispatching.

The following example uses a typical implementation strategy of the page controller to provide a banner that displays dynamic content: the authenticated user’s e-mail address (which is retrieved from the database) on every page in the application.

The common implementation is contained in a base class from which all of the page objects in the site inherit. Figure 3.12 shows one of the pages in the site. 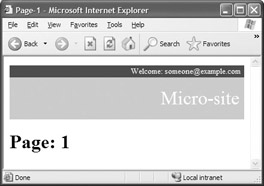 Applying Template Method to this problem involves moving common code from the individual pages into a base class. This ensures that the common code is contained in one place and is easily maintainable. In this example, the base class is named BasePage and is responsible for connecting the Page_Load method to the Load event. After the work associated with the BasePage; which is retrieving the user’s e-mail address from the database and setting the site name, the Page_Load function calls a method named PageLoadEvent. Subclasses implement PageLoadEvent to perform their own specific Load functionality. Figure 3.13 shows the structure of this solution. 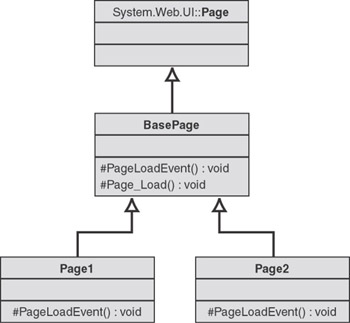 When a page is requested, the ASP.NET runtime fires the Load event, which in turn calls the Page_Load method on BasePage. The BasePage method retrieves the data it needs and then calls PageLoadEvent on the specific page that was requested to perform any page-specific loading that is required. Figure 3.14 shows the page request sequence.

Implementing the common functionality in this manner frees the pages from having to set up the header and also allows for site-wide changes to be made easily. If the header rendering and initialization code is not contained in a single file, the changes must be made to all files that contain code that is related to the header. 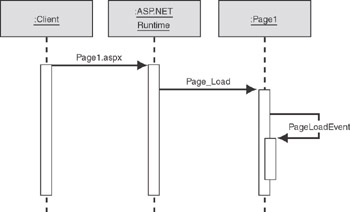 The code for the base class implements the following functionality:

Not only do you have to provide a common base class for the logic code behind the page, but you also have to provide a common file that holds the view or UI rendering code. The code is included in each .aspx page. This HTML file is not intended to be displayed on its own. Using a common file enhances your ability to make changes in one place and have them propagate to all the pages that include the file. The following example code shows the common file for this example, named BasePage.inc:

This class encapsulates all access to the database for these pages. This is an example of a Table Data Gateway [Fowler03] which represents the model code for the pages in this application.

The following is an example of how to use the common functionality in a page:

The following directive from the file loads the common HTML for the header:

The code-behind class must inherit from the BasePage class and then implement the PageLoadEvent method to do any page-specific loading. In this example, the page-specific activity is to assign the number 1 to the pageNumber label.

The dependence on the ASP.NET runtime makes testing of the implementation difficult. It is not possible to instantiate classes that inherit from System.Web.UI.Page or the other various classes contained in the environment. This makes it impossible to unit test the individual pieces of the application in isolation. The only remaining way to test this implementation automatically is to generate HTTP requests and then retrieve the HTTP response and determine if the response is correct. This approach is prone to error because you are comparing the text of the response with expected text.

The built-in ASP.NET page controller functionality results in the following benefits and liabilities: