Serial communication is a low-level, point-to-point technology used to transfer data between two devices, typically at close range ”Series 60 supports serial communication over infrared and Bluetooth. Central to the Series 60 implementation is the Serial Communications Server (also referred to as the Comms Server or C32 ). This uses the familiar Symbian OS Client/Server framework to provide access to serial hardware, and it is generic (in other words, the same API is used for both infrared and Bluetooth serial communication ”note that other hardware can be supported by the addition of plug-ins) and shared (in other words, several client threads can safely use the same serial port concurrently).

All serial communication on Series 60 is implemented using the following basic steps:

To illustrate how to implement the basic steps that have been outlined, an example application is provided. This application is called IrSerial , and it allows the user to enter some text, which it then sends to an IR-enabled printer using serial communication. A screenshot of IrSerial is shown in Figure 9-1. 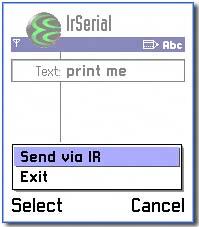 All the example code shown here comes from the CIrSerialEngine class. Here are the relevant member variables from the class, which are featured throughout this section:


You should also note that CIrSerialEngine is an Active Object ”in other words, it is derived from CActive .

The following subsections show how to implement each of the basic steps needed for serial communication.

Your first step is to load the serial communication drivers. There are two parts you need to load: a physical driver (which interacts with the hardware directly), and a logical driver (which provides an API onto the physical driver). The names for these are fixed and are defined here globally. Notice that the physical device driver for emulator builds (WINS) is different from that for target builds, as you would expect when dealing with different hardware.


These literals are then used to load the drivers in the CIrSerialEngine::InitialiseL() method:


Note that a return value of KErrAlreadyExists from the loading functions indicates that the driver is already loaded. This is not considered an error, so you can call this code "blindly," without needing to explicitly check in advance whether the driver is already loaded. If your code is part of a UI application, these drivers will already have been loaded by the Series 60 UI framework.

Also, at the top of this example, note the unusual WINS-only lines, to connect an RFs file session and then immediately close it. The purpose is to ensure that the File Server is loaded before the calls to load the drivers. Opening a session will start the server if it is not already started, but since you do not use the file session itself, you should then just close it and discard it.

Next , you need to start the Comms Server itself. The code for this is very similar to the code you used to load the drivers. In particular, note that this code can also be safely called even if the Comms Server has already been started. Also, note that StartC32() is a global function (defined in c32comm.h ).


Connecting to the Comms Server

RCommServ is a client-side handle on the Comms Server and is used by all subsequent code to communicate with it. First you need to connect the handle to the server:


Note that here, unlike in the previous code snippets, any return value other than KErrNone is considered an error.

A CSY is a DLL plug-in to the Comms Server that needs to be explicitly loaded before data transfer can take place. As with the drivers, CSYs are loaded by name: " IRCOMM " for infrared and " BTCOMM " for Bluetooth. The IrSerial example illustrates how to load the infrared CSY:


Again, note that any return value other than KErrNone should be treated as an error. To change your code to use Bluetooth instead of infrared, you would have to load the Bluetooth CSY ( BTCOMM ) here.

Your next step is to open a serial port. Again, this is opened by name. Note, however, that port names are not fixed and may need to be obtained dynamically. In the case of infrared, however, the port name is well known, so the IrSerial example defines this as a string literal and uses it directly:


The third parameter to RComm::Open() indicates a mode in which the port should be opened. The possible values are as follows :

In cases where the port name is not well known, the following code (not taken from the IrSerial example) shows how you would obtain it dynamically:

Before you finally make use of the serial port you have just opened, you may need to configure it. This will depend on the requirements of the device you are connecting to; devices offering serial communication services will usually be accompanied by some form of documentation detailing the configuration required (such as maximum port speed and use of data format elements such as stop bit and parity bit). You can also query its capabilities to ensure that it supports the configuration you require.


The port's capabilities are queried as follows:


The constant values used here (such as KCapsBps19200 ) are all defined in the system header file d32comm.h .


Note also that you do not need to leave if the port's capabilities do not match your requirements. You may choose to handle this condition differently ”for example, by prompting the user to select a different port or CSY.

Next, you can set the configuration of the port. You should start by obtaining the current configuration so that values you do not wish to set explicitly stay the same.


Note again that TCommConfig is a package buffer and so requires slightly unusual syntax.

Finally, there are some miscellaneous configuration details that cannot be set using a TCommConfig object. For example, flow control signals such as DTR (Data Terminal Ready) and RTS (Ready To Send) are set using the RComm::SetSignals() function, as follows:


Once configuration is complete, the serial port is ready to use. The next subsection shows how data is sent.

Transfering Data over the Port

The CIrSerialEngine::Transmit() method is used to send data over the port you have just opened. The user provides data to send by typing text into a dialog, which is passed to this function as the aTxData parameter.


There are some interesting points to note here:

When you have finished sending and receiving data over the serial port, you must close the port (or more specifically , close the handle on the port), and likewise close the server. Fortunately, this is the simplest step of the whole process!