Vertical lists display to a user a one-dimensional set of items, each occupying one line in the list. Various types of vertical list exist ”Table 7-1 provides an overview of their functionality, with each type described in detail in this section. An example application illustrating each type provides a practical guide to using vertical lists.

A selection list allows one item at a time to be selected. If you need to enable the user to select multiple items simultaneously , you should use a multiselection list. The items in a selection list represent persistent data ”if the user switches away from the application or closes it, the items will all be the same when the list is next displayed. An example use for a selection list would be for a game to display a list of saved games , as shown in Figure 7-4. Selecting an item allows you to do several other things as well, like opening a more detailed view to show details of the game, which the user could edit. You can also execute a command, such as to play the game or open a context-sensitive menu. 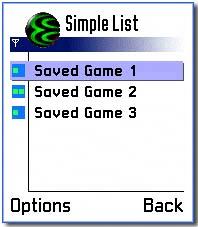 The usual way to invoke a menu list is by choosing an item from a selection list ”the menu list then contains further options for the selected item. For example, selecting a saved game from a selection list could invoke a menu list showing levels from a previously saved game, as shown in Figure 7-5. Selecting an item from the pop-up menu invokes a command, such as playing a game at the selected level. 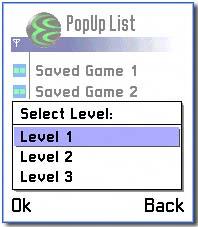 Menu lists are very similar to context-sensitive menus invoked by the Selection key. You should use a menu list when you need to provide the same set of actions for a number of items (for example, to play a game at a specific level). A context-sensitive menu should be used when you need to provide alternative actions for a selected item (for example, to play or delete a selected game).

Markable lists allow a user to mark multiple items and perform an action on all of them. For example, in a markable list of saved games, the user may choose to delete all of the marked games, as shown in Figure 7-6. 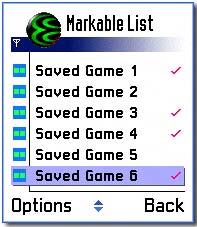 Selecting Mark, Mark All, Unmark or Unmark All from the Options menu, or using certain keys, marks and unmarks the items graphically. Note that nothing is displayed by a markable list (such as an empty checkbox) to indicate explicitly that an item can be marked. If you need to show explicitly that items should be marked, you should use a multiselection list instead.

When a command is invoked from the Options menu (for example, Delete ), it will be applied to the marked items only ”if an item is focused but not marked, it will not be affected by the command. Pressing the Selection key could invoke a command (for example, Delete ) on the marked items or open a context-sensitive menu. Further details of context-sensitive menus can be found in the Menus section of Chapter 5.

Multiselection lists, as shown in Figure 7-7, allow you to mark a number of items and perform an action on all of them. 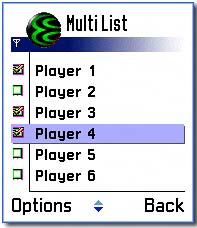 Items are checked and unchecked using the Selection key. Pressing the left soft key accepts the list of checked items and invokes a command (for example, to play a multi-player game against the checked players). Note that the Options menu is not available in a multiselection list.

Note that, in any given list, every item has exactly the same type and layout of fields.

You can search for items in a list using a search field (also known as a find pane ), as shown in Figure 7-8. This is a particularly useful feature in long lists. You type into the search field part of the text of the item you wish to find. As you type, the list filters to display only those items that start with text you have typed. 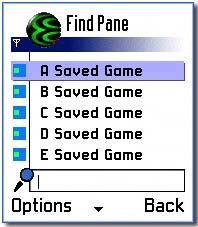