At the time of writing this, Visual Studio Team System has been out for several months. In my previous book, Professional Visual Studio 2005 Team System (also published by WROX-ISBN: 0-7645-8436-7), the focus was specifically on the features of the product. This book takes a slightly different approach- rather than look at features, we will look at common tasks and scenarios around the entire software development lifecycle (SDLC).

In case you've never heard of Team System, it is a new product developed by Microsoft to support not only developers but also other members of development teams such as architects, database professionals, testers, and product managers. Team System is much more than Visual Studio-it includes a worldclass version control system, build server, a workflow and bug management system, reporting, and much more.

As companies start to work with Team System, they will inevitably encounter challenges such as implementing IT governance (Sarbanes-Oxley comes to mind), working within mixed environments (Java and .NET, for example), and setting up the product for large distributed environments. This book addresses these real-world challenges and much more. The contents are based on the practical experience of two Microsoft Team System Most Valuable Professionals (MVPs) and a host of sources within the product team.

Unlike other Team System books that may focus solely on developers, this book targets the project manager, administrators, and IT professionals. If you happen to be in one of these roles (or you are a consultant or systems integrator), you'll find a lot of great pragmatic information and step-by-step guidance within the pages of this book. We tell you how to handle a variety of tasks including setting up and administering Team System. This includes planning, project creation, and even properly completing a software project at the end of a development cycle.

The book provides a lot of depth on a variety of features in Team System; however it does not cover the whole of the product. For example, there is very little information provided about the Visual Studio 2005 Team Edition for Software Architects or Domain Specific Language (DSL) tools. If you would like a full overview of Team System, we would highly recommend you pick up Professional Visual Studio 2005 Team System published by WROX Press. All efforts have been made to diminish the overlap between books and in fact, you'll find them to be quite complimentary.

When deploying Team System, it's a natural tendency to be thinking about the development process. Thus you will probably be thinking about how your own teams are organized, continuous development, builds, refactoring, and so forth. However, it's important to look at a deployment on many levels (as shown in Figure IN-1): 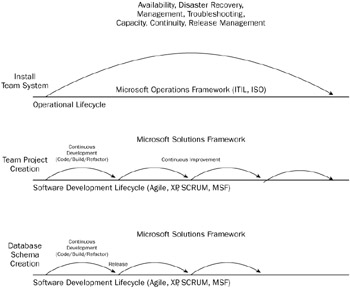 When you deploy and use Team System, there are multiple lifecycles you have to take into consideration: