Binding (the TNS term) or linking (the native term ) is the operation of examining, collecting, and modifying code and data blocks from one or more object files to produce a single object file. Two important aspects of binding or linking a program are validating and resolving references to other routines.

Resolving a reference to another routine means generating the code that will transfer control from the calling routine to the called routine at execution time.

Block The smallest unit of code or data that can be relocated as a single entity.

Source File Code and data blocks, compiled and bound together.

Program An executable object file. It must contain an entry point with the MAIN attribute.

The components of BINDER are:

The BINSERV form of BINDER is only used by language compilers; it cannot be executed by users directly. It executes as a separate process during a compilation, accepts commands from the compiler, builds lists of references that need to be resolved, and finally creates the target file. 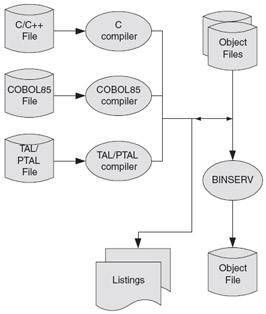 BIND is the interactive version of the BINDER. It can be used as an independent, standalone program to query, update and link program files interactively.

BIND can be used to update and link program files written in C, COBOL85, FORTRAN, Pascal, and TAL. BIND is the only form of Binder that produces executable program files for Pascal programs (See Figure 6-3). 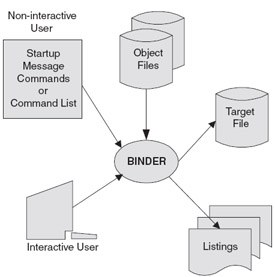 BIND is used to:

Build a target file of procedures in a shareable library.

Modify the values of code and data blocks in the target file.

Specify external references not to be resolved by Binder.

Strip the program file of the BINDER and INSPECT regions .

RISK BIND can be destructive because it can make the following changes to program code files. Programs could be directed to libraries containing malicious procedures and variables and data could be modified.

Build a target file of procedures in a shareable library.

Modify the values in the code and data blocks of the target file.

The security requirements for BIND and BINSERV differ greatly between a system used for development and a secure environment. The risks for a secure system require stronger security of the BIND command and the compilation function, in general.

VPROC is the generally accepted way to easily determine the version information for an object program.

If available, use Safeguard software or a third party object security product to grant access to BINDER components only to users who require access in order to perform their jobs.

This section lists only the BIND commands that pose security risks.

RISK BIND poses a security risk in a secure environment only if the users authorized to execute BIND have WRITE access to application object files. All of the commands in the list manipulate the creation or contents of a program.

3P-OBJSEC-BINDER-01 If a third party product is used to grant access to BIND running as a privileged userid such as the application object code owner, these commands should be denied to all users other than the system managers.

Only members of the group (if any) responsible for compiling programs on the secure system should have WRITE access to secure object files.

AP-ADVICE-BINDER-01 On secure systems, BIND should be restricted to use by Application Support staff and those responsible for managing object files.

AP-ADVICE-BINDER-02 In secure environments BIND should be used only to research and report on object parameters, not alter them.

BINDER respects file security. If users run BIND under their own userid, they can only BIND object files that they have been granted access to via the Guardian or Safeguard system.

AP-ADVICE-BINDER-03 Users should run BIND under their own userid.

AP-ADVICE-BINDER-04 The application support staff should not have WRITE access to secure object code.

AP-ADVICE-BINDER-05 To safeguard the secure databases, the group (if any) responsible for compiling programs on secure systems should not have READ access to secure database files.