Situated among the technologies of the future, the development of one invisible, distributed and ubiquitious technology was the aim of a research project on which we currently work within the framework of project POGO (European Program I3 Intelligent Information Interfaces, Exploring New Learning Future for Children).

This technological orientation rides on the concept of affordance as perceived by objects (Gibson, 1977) and of apparatuses of information (Norman, 1998), and considers the way in which the instrument supports the task so that it becomes an integral part of it, as if it were a natural extension of the human and his work. That implies a specialisation of the function so as to be in perfect agreement with real needs of the users, and to offer great simplicity and transparency. According to this philosophy, instruments will not be recognisable as such any more, so they will disappear from the sight and the consciousness of the humans . The movement towards an invisible technology (Norman, 1998), is manifested in instruments designed and thought out within the framework of project POGO - active instruments, new semiotics tools which should fit in a harmonious way into traditional instruments where any centralised unit of data processing disappears from the sight and consciousness of the user .

Six tools forming the POGO system were designed and evaluated. Beamer POGO is one tool which makes it possible to visualise and capture the purposes or appearance of the physical world and to import them into the virtual world by, in particular, projecting them directly on the screen. The beamer includes/understands a screen sensitive to the touch and allows the children to draw on it, to write as if their finger were a pencil and also to capture various type images and to record them on a card. The cards' pastiches are memories of elements and of the made up images. The children can record elements there by acting on the beamer. Other cards contain predefined and preregistered elements (sky, sea, landscape). There are also cards which contain sounds. The flexible screen is used to visualise the basic images contained in the cards. The screen is provided with three small pockets which contain card readers which correspond to three different positions on the screen. The screen flexible device can be fixed to the wall or used on the ground. There is also an integrated device which allows the children to change the colour of the projection. The sound carpet is a carpet which allows them to play with sounds which are contained in cards. By inserting a card in the card reader, the children activate a basic sound of the environment which is played in loop plus a series of specific sounds which are activated on pressing on the various zones of the carpet. The tool voice enables the microphone to create distortions of the voice. At this moment it is possible to render the voice sharper or more serious in tone. The mumbo makes it possible to read an image contained in one card and to project its contents onto the flexible screen. It includes functionalities of zoom and rotation which makes it possible to make the elements move on the screen.

The philosophy of design of POGO instruments foresees simple tools affording the stimulation of sensory effects and a great reactivity with environment. They aim at a flexible and harmonious integration between the physical world and virtual world and, in the socio-cutural theoretical orientation, support with development of the narration as a vehicle of the direction and with the interaction between development of the narration as a vehicle of the meaning and with the interaction between world of the child and the images, models and significances existing in the culture. Their central question is to know with which future instruments could one provide advantages compared to what is done already in the school environment where training goes through an appropriation of meaning, with work on the emotion, imagination , exploration and social externalisation. We are interested in the effects of introduction of active and distributed new instruments on the narrative activities in a school environment. How do POGO instruments transform the activity of the children when they create stories? 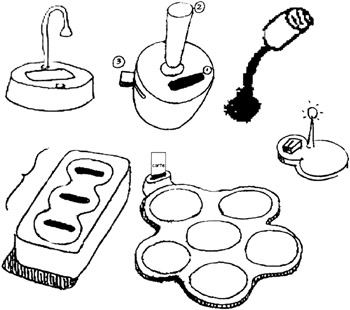 The above shows the new tools of POGO: Beamer, the mumbo, the assembler, the microcomputer, the mobile camera, the sound carpet, and the sequences recorder. 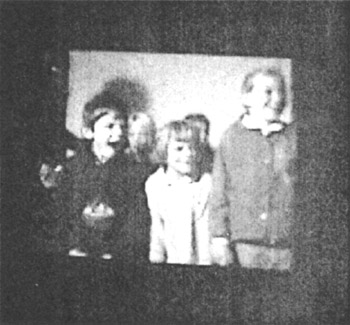