Upon its formation EP started by having a hierarchical organizational structure. During 1992–1993, a decision was made in favor of devolving the business activities to power stations and giving them the authority to operate as independent business units with minimal centralized control. All business units across the five main divisions (see Figure 2) were given almost total autonomy. This move was an effort to increase the overall flexibility and competitiveness of the company by enabling decisions to be made closer to the operational level. However, a lack of experience and knowledge with respect to certain business functions such as planning had delayed the introduction of formal mechanisms. Thus, numerous critical functions were performed on an ad hoc basis. Additionally, various change initiatives had attempted to make EP a project and process-oriented organization as opposed to structure-based by trying to assign groups of people assembled from a number of different business units to the various development efforts. This ‘project-oriented’ attitude seemed to work, providing the company with a level of flexibility at the unit level, but at the same time this very flexibility was constrained by senior managers and executives. 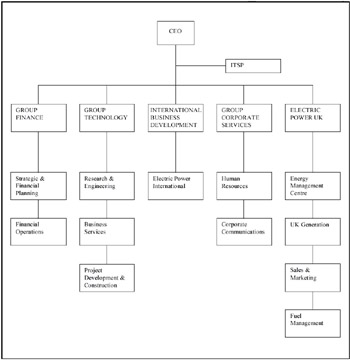 These disparities at the unit and organizational levels were related to EP's culture: receptive and open to changes at one end, but at the same time a great lack of trust and territorialism at the other end. When a change occurred, for example, there was an aggressive/ defensive stand rather than a co-operative one—exactly when co-operation was most needed. CEGB, from which EP came into being, was a hierarchical organization. Teamwork did not happen at all and managers referred to it as a ‘patch-protected’ organization, where in a sense no one was allowed to infringe on what you did. The culture promoted in the new organization was a strikingly different one. Innovation was encouraged, and so was individuality and devolution of responsibilities, resulting in intense competition at the individual and business unit levels. The coexistence of these two opposite cultural dimensions had given rise to a deadlock situation that seemed to plague the organization. On the one end, there was almost total autonomy and freedom with respect to performing any task or activities one saw fit with the prospect of adding value to the company. At the other end, the culture brought by the same people based on the history of the CEGB made them unwilling to take a macro view past the boundaries of their own business units.

As far as information technology was concerned, the company was a ‘green field’ upon its establishment in 1990. A major consulting firm who adopted the classic ‘big-bang’ approach for their development undertook the task of putting the information systems in place. At the same time, the company had the opportunity to invest in an infrastructure— an organization-wide network that aimed to streamline communications between the various geographically dispersed locations facilitating faster decision-making, providing immediate access to key and up-to-date information and improving the quality of power station operations. One of the past main objectives, namely to produce electricity cheaply, had been in a way reflected by the information systems in the company which were developed to serve this objective faithfully, and be as rigid and dependable as possible. The main information systems in the company were the following: