Working with the GUI Kickstart Configurator

If you need more information on starting a command-line interface in GNOME or KDE, refer to Chapter 16 or 17 . 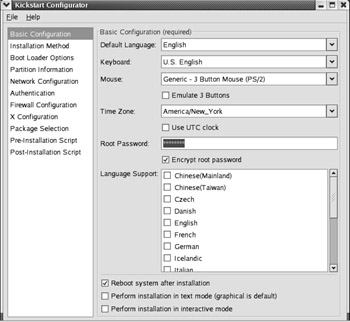 As you can see, the left-hand column contains 11 menus , which we ll look at in the following sections. If you ve installed Red Hat Linux or read the first parts of this chapter, you should already be familiar with many of the options.

If you want to start from an existing configuration, click File ˜ Open File. You can then select a file, such as /root/anaconda-ks.cfg , from the menu that appears.

The Basic Configuration menu is shown in Figure 5.2. It includes a number of basic settings, which are briefly described in Table 5.6.

In the Kickstart Configurator, select Installation Method. You should see the options shown in Figure 5.3. 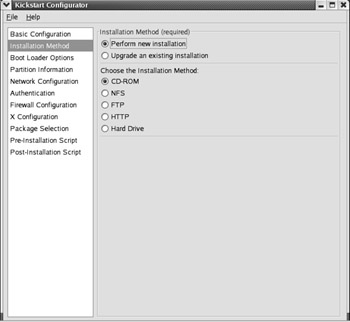 These options are fairly self-explanatory; you can configure Kickstart to install a fresh copy or upgrade Red Hat Linux. You can also specify a local (CD-ROM or Hard Drive) or network (FTP, HTTP, NFS) source for the installation files.

The Boot Loader Options menu allows you to configure the type and location of the bootloader on your system. As we discussed in Chapter 11 , there are two basic Linux bootloaders: GRUB and LILO. As you can see in Figure 5.4, this menu contains four sections. 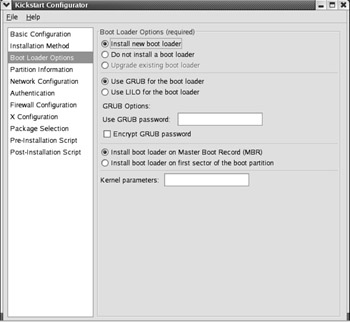 If you already have a third-party bootloader (from Partition Magic or System Commander, for example), you can install GRUB or LILO on the first sector of the boot partition. If you prefer LILO and are upgrading Linux on this computer, you can keep LILO by selecting Upgrade Existing Boot Loader.

Normally, you ll install the bootloader on the Master Boot Record. If you prefer to use another bootloader, you can install GRUB or LILO on the first sector of the partition with your /boot directory.

You can also pass hardware parameters to the kernel. This is most commonly used when Linux has trouble detecting hardware automatically. You can specify a wide variety of parameters here, as defined in the bootparam man page.

There is one more option related to bootloaders, which we discuss in the next section.

You can configure most of the partitions that you need in the Partition Information menu, shown in Figure 5.5. 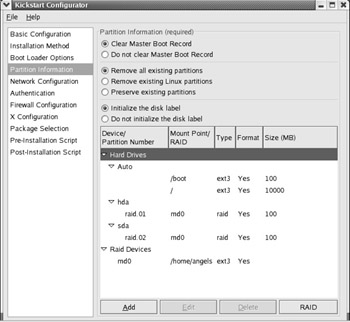 The first parts of this menu allow you set basic parameters for your hard disk. The Clear Master Boot Record option erases any existing bootloader from your hard disk. It is equivalent to Kickstart s zerombr=yes command.

If the hard disks have existing partitions, you can choose to delete just the Linux partitions, or all partitions on all detected hard drives. If you re installing Linux on computers with new hard drives, you ll also want to select Initialize The Disk Label.

Click Add to open the Partition Options dialog box, shown in Figure 5.6. If you re familiar with Disk Druid from Chapter 03 , the options here should look familiar. If you need more information on most of these options, read Chapter 03 . 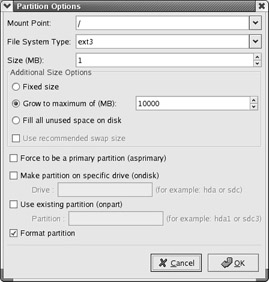 In addition to what is shown in Disk Druid, this dialog box contains the following two options:

Use Recommended Swap Size Red Hat can configure a recommended swap partition. It s normally twice the size of your RAM.

Use Existing Partition If you know the partition layout of the target computer, you can specify a partition such as hda1 . See Chapter 02 for partition-naming conventions.

As of this writing, the Kickstart Configurator does not support the creation of volume groups for LVM partitions. You can still add LVM criteria to the actual Kickstart file, as we explained earlier.

You can also set up RAID devices. If you ve configured RAID partitions, click RAID. In the RAID Options window, select Create A RAID Device and click OK to continue. This opens the Make RAID Device dialog box, shown in Figure 5.7. 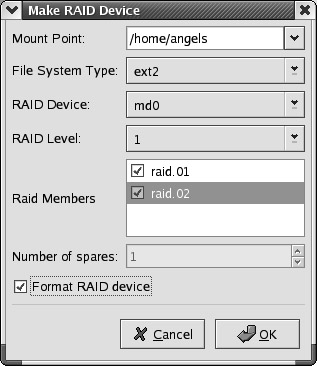 If you have a sufficient number of RAID partitions, this dialog box supports creating RAID devices at levels 0, 1, and 5. For more information on RAID requirements at these levels, see Chapter 14 .

To configure Ethernet network cards on your computer, use the Network Configuration menu. If you have a different type of network card, you ll have to edit the Kickstart configuration file directly. As you can see in Figure 5.8, the buttons allow you to add, edit, or delete various network devices. 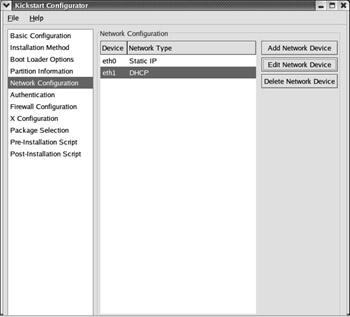 When you add or edit a network device, it opens the Network Device Information dialog box, as shown in Figure 5.9. 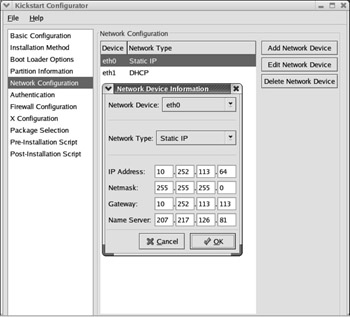 You can configure a number of different settings for each network device:

Network Device Click the drop-down arrow to set this to one of 17 Ethernet network devices, between eth0 and eth16.

Network Type You can select a network type for Static IP configuration; or you can get data for this network device from a local DHCP server, or a remote DHCP server using BOOTP. If you choose to set a Static IP network type, you can configure network address information for that device.

IP Address The IP version 4 address for the network card

Netmask The network mask for your LAN

More information on each of these settings is available in Chapter 20 .

As we described earlier, authentication normally describes how a computer checks usernames and passwords. The basic menu is shown in Figure 5.10. 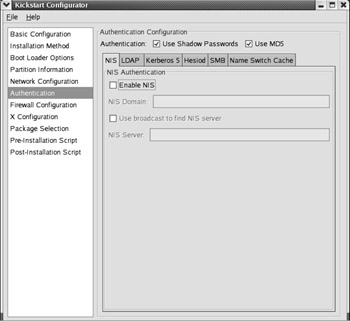 By default, Kickstart configures two types of password security. Shadow passwords are part of the Shadow Password Suite described in Chapter 09 . MD5 is a form of encryption applied to user passwords.

As you can see in Figure 5.10, this window includes a series of tabs that represent various forms of authentication. They are briefly described in Table 5.7.

The Firewall Configuration menu should look familiar if you ve installed Red Hat Linux in either Chapters 3 or 4 . As you can see in Figure 5.11, you can choose from three basic firewall configurations: High, Medium, or Disabled. 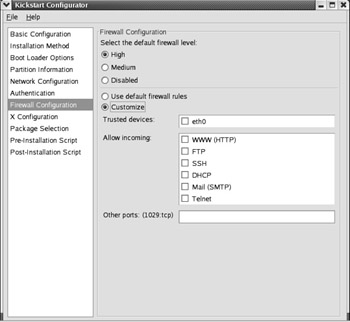 If you choose to configure a firewall, you can customize it. You can exclude a network card such as eth0 from the firewall by checking the device name in the Trusted Devices text box. In addition, you can allow incoming network traffic to several different types of servers: web (WWW), FTP, a Secure Shell (SSH), DHCP, incoming mail (SMTP), and Telnet.

The Other Ports text box lets you add other ports based on /etc/services .

The X Configuration menu should look familiar if you know about the redhat-config-xfree86 tool. If you choose to configure the X Window through Kickstart, select Configure The X Window System. This activates the three tabs shown in Figure 5.12. 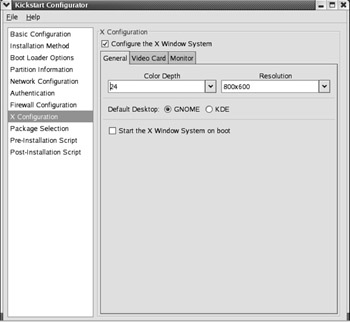 On the General tab, you can select an overall Color Depth and Resolution for your system. Be careful; some systems can handle a color depth of 24 bits per pixel; others are designed for 32 bits per pixel. Assuming your computer reflects the target hardware, it s best to take a working configuration from the xconfig command in your anaconda-ks.cfg file.

The other options are self-explanatory. If you ve installed GNOME or KDE, you can make set of these as your default desktop. If you enable the Start The X Window System On Boot option, Linux opens one of the display managers described in Chapter 15 .

The Video Card and Monitor tabs include the same database that is available through redhat-config-xfree86 . You can find more information on this system in Chapter 15 . By default, Kickstart probes for your video card and monitor, or you can activate the settings, including the monitor horizontal and vertical sync, using this tool.

The Package Selection menu allows you to select from the standard package groups in the comps .xml configuration file. As shown in Figure 5.13, the window is organized in the same way as Red Hat s graphical installation tool.

Select the package groups of your choice. Details of each group are available in the comps.xml file.

Unless you know what you re doing, select Automatically Resolve Dependencies. That option ensures that foundation software gets installed. Otherwise, a lot of the software installed with Red Hat Linux may not work. 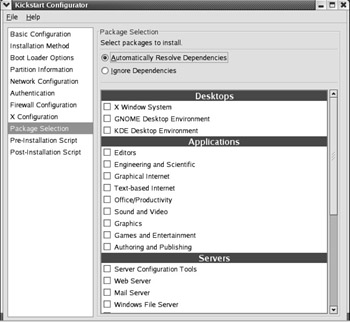 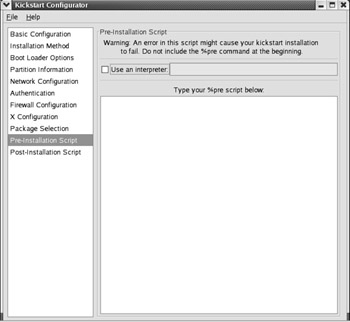 The default script language is bash. If you want to use commands in a different language, activate the Use An Interpreter text box and then enter the location of another language module, such as /usr/bin/python . Test your scripts; if there s an error, your Kickstart installation may fail. 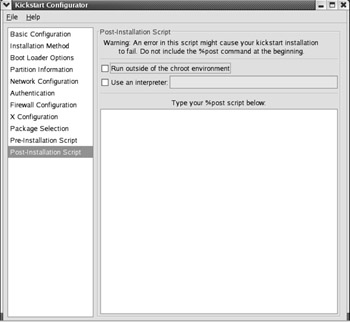 For more information on the chroot environment, see Chapter 27 . Once again, it s important to test your scripts. If there s an error, your Kickstart installation may fail.

Once you ve made your changes, you ll want to save your configuration to a Kickstart file. To do so, click File ˜ Save File and save the file in the directory of your choice. As you ll see in the next section , it helps to name the file ks.cfg .

If there are things that you could not add to your configuration file, such as LVM partitions, open ks.cfg in a text editor and do so now. We examined the basic configuration and commands of a Kickstart file earlier in this chapter.