Apache is by far the most popular Web server in use today. Based on the HTTP daemon (httpd), Apache provides simple and secure access to all types of content using the regular HTTP protocol as well as its secure cousin, HTTPS.

Apache was developed from the server code created by the National Center for Supercomputing Applications (NCSA). It included so many patches that it became known as "a patchy" server. The Apache Web server continues to advance the art of the Web and provides one of the most stable, secure, robust, and reliable Web servers available. This server is under constant development by the Apache Software Foundation (www.apache.org).

Although you can use a number of different packages to configure HTTP, HTTPS, and Web Proxy services, the publicly available RH300 course outline focuses these services on Apache as a regular and secure Web server, and Squid as the Web Proxy server. The Exam Prep guide also notes that RHCEs should be able to

This includes those services listed in the Installation and Configuration portion of the RHCE exam. For every network service, you also need to

Installing the required packages is trivial. You'll make sure the service is started when the system is booted with the appropriate chkconfig commands. Most of this chapter is dedicated to configuring the service for basic operation. Some services support host-based and user-based security in their configuration files; others support it with the tools described in Chapter 15. SELinux is also most easily configured using the SELinux Management tool described in Chapter 15.

While there are numerous other Web servers available, Apache is the only Web service described in the current RH300 course outline.

Apache is a service; basic Apache clients are Web browsers. Therefore, only those concerned with the RHCE need to read this chapter. This provides the briefest of overviews on Apache. For more information, read the documentation online at http://httpd.apache.org/docs-2.2.

Red Hat Enterprise Linux includes the latest major release of Apache, which is 2.2.x as of this writing. While there are major differences from previous versions of Apache (1.3.x, 2.0.x), if you're a Web administrator or developer, the differences with respect to the RHCE exam are fairly straightforward. The current version supports virtual hosts and access control, as well as secure (HTTPS) Web services. If you're interested in more, a full list of new features is available from http://httpd.apache.org/docs/2.2/new_features_2_2.html.

The following cites a few of the major changes:

You may see some of these characteristics if you use Apache 1.3.x, as many of these features have been "backported" from current versions of Apache.

The RPM packages required by Apache are included in the Web Server package group. If required on the Installation and Configuration portion of the exam, you should install Apache during the installation process. But mistakes happen. Just remember that the simplest way to install Apache after installation is with the following command:

Alternatively, if you need the Red Hat GUI Apache Management tool, run the following command, which also installs the Apache httpd RPM as a dependency:

Another option is to just install the default packages associated with the entire Web Server package group with the following command:

If you don't remember the names of available groups, run the yum grouplist command. From the output, you should see "Web Server"; in other words, the following command also works:

If your exam instructions require the installation of other packages such as mod_ssl (required for secure Web sites) and Squid, you can combine their installation in the same command:

If in doubt about package names, you can find them in the Web Server package group, as documented on the first installation CD in the Server/repodatata/comps-rhel5-server-core.xml file. If you're working with the RHEL 5 desktop, substitute Client for Server (upper- and lowercase). Once you've connected to a repository such as the RHN, the same information should be available in comps.xml in the /var/cache/yum/rhel-i386-server-5 directory. If you're working a different architecture and a client, substitute accordingly.

Once Apache is installed, you'll want to make sure it starts the next time you boot Linux. If it doesn't start when the person who grades your Red Hat exam reboots your computer, you may not get credit for your work on the Apache service.

The most straightforward way to make sure Apache starts the next time you boot Linux is with the chkconfig command. You'll need to set it to start in at least runlevels 3 and 5, with a command such as:

Alternatively, you can configure it to start in all standard runlevels (2, 3, 4, and 5) with the following command:

To determine whether the chkconfig command worked, use the --list switch:

Normally to start services, it's best to use the associated script in the /etc/init.d directory, which contains an httpd script. However, Apache often starts and stops more gracefully with the following commands:

If you see "The 'links' package is required for this functionality" error message, you'll need to install the elinks RPM.

Once you've got Apache running, start a Web browser and enter a URL of http://localhost. If Apache installation is successful, you should see the screen in Figure 9-1. 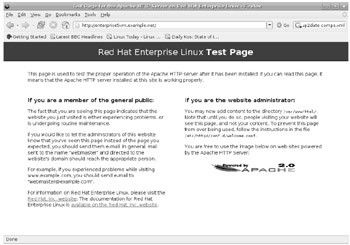 Read the screen and you will see that RHEL looks for Web page files in the /var/www/html directory. You can verify this with the DocumentRoot directive in the main Apache configuration file. If you want to create a custom error page, you can set it in the /etc/httpd/conf.d/welcome.conf file.

In this exercise, you'll be installing all of the packages generally associated with the Apache server. Then you'll test and activate the result so that the Apache daemon, httpd, is active the next time you reboot Linux. The twist here is that you'll do it all from the command line interface. This assumes you've already registered with the Red Hat Network; if you haven't done so, you'll do so here as part of the process.

Apache comes with a well-commented set of default configuration files. In this section, you'll look at the key commands in the httpd.conf configuration file, in the /etc/httpd/conf directory. Browse through this file in your favorite text editor or using a command such as less. Before beginning this analysis, keep two things in mind:

There are a couple of basic constructs in httpd.conf. First, directories, files, and modules are configured in "containers." The beginning of the container starts with the name of the directory, file, or module to be configured, contained in directional brackets (< >). Examples of this include:

Next, Apache includes a substantial number of directives-commands that Apache can understand that have some resemblance to English. For example, the ExecCGI directive allows executable CGI scripts.

As the RHCE course divides the discussion of Apache into different units, I do the same here. However, the following sections, with the exception of secure virtual hosts, are based on the same httpd.conf file in the /etc/httpd/conf/ directory.

While this provides an overview, the devil is often in the details, which are analyzed (briefly) in the next section. For detailed information, see the Apache Web site at http://httpd.apache.org.

This section examines the default Apache configuration file, httpd.conf. If you want to follow along, open it on your system. Only the default active directives in that file are discussed here. Read the comments; they include more information and options.

For detailed information on each directive, see http://httpd.apache.org/docs/2.2/mod/quickreference.html. The default directives are summarized in the following three tables. Table 9-1 specifies directives associated with Section 1: Global Environment.

In all three tables, directives are listed in the order shown in the default version of httpd.conf. If you want to experiment with different values for each directive, save the change and then use apachectl restart to restart the Apache daemon. If not defined in these tables, directives are described, later in this chapter, as they appear in the configuration file.

Table 9-3 specifies directives associated with Section 3: Virtual Hosts. While virtual host directives are disabled by default, I include those directives in the commented example near the end of the default httpd.conf file. While these directives were already used in other sections, you can-and should-customize them for individual virtual hosts to support different Web sites on the same Apache server.

As described earlier, Apache looks for Web pages in the directory specified by the DocumentRoot directive. In the default httpd.conf file, this directive points to the /var/www/html directory.

In other words, all you need to get your Web server up and running is to transfer Web pages to the /var/www/html directory.

The default DirectoryIndex directive looks for an index.html Web page file in this directory. You can test this for yourself by copying the default Firefox home page file, index.html, from the /usr/share/doc/HTML directory.

The base location of configuration and log files is determined by the ServerRoot directive. The default value from httpd.conf is

You'll note that the main configuration files are stored in the conf and conf.d subdirectories of the ServerRoot. If you run the ls -l /etc/httpd command, you'll find that Red Hat links /etc/httpd/logs to the directory with the actual log files, /var/log/httpd.