SEU is the AS/400's main source code editor. It is so important that all programmers should get acquainted with it. SEU is a full-screen editor. Although not as powerful as most PC-based editors, it's the most powerful editor IBM has ever made available on any midrange machine.

You can start SEU in two ways: by using the Start SEU (STRSEU) command or by selecting option 2 from PDM. Start SEU to begin editing a new source member in source file MYLIB/QCLSRC. The name of the member will be CLSAMPLE, and the member type is CLP:

The system presents the panel shown in Figure 29.9. 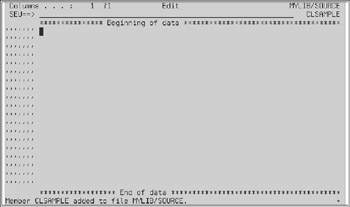 Your panel may look different. It may have fewer open lines between the "Beginning of data" and "End of data" markers. Later, you will see how you can change yours.

Note that you can enter data in two main areas. The left-hand column (filled with apostrophes) is the line command area. In this area, you can enter special commands to insert, delete, and move lines. The data entry area where you enter the actual source code occupies most of the screen, however.

Because member CLSAMPLE is a CL source member, begin by entering a PGM command. In the main entry area, type PGM, as in the example in Figure 29.10. 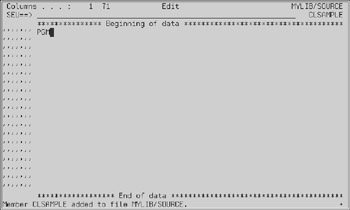 Because the source type is CLP, SEU knows that the source code will consist of commands. Commands can be prompted using the F4 key. SEU lets you prompt for the PGM command by pressing the F4 key (with the cursor still on the same line). The result will look like the panel seen in Figure 29.11. 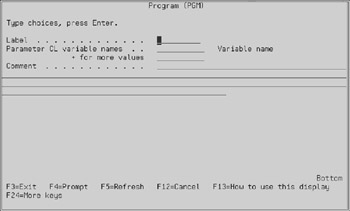 The example in Figure 29.11 represents the command prompter for the PGM command. Because you are entering source code, the prompter shows two input fields it never showed before: Label and Comment. Enter name in the Label input field, and &option in the first input line that follows. Then press Enter, and you will see a panel like the one presented in Figure 29.12. 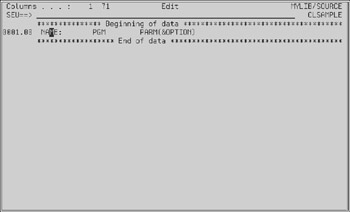 This activity can continue for many more commands and can become the source code for a complete program in this member. When you are done entering the statements, press F3 to exit SEU. SEU presents the panel in Figure 29.13. 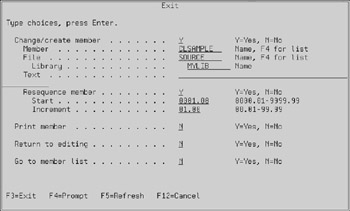 If you don't change anything and press Enter, SEU updates source member CLSAMPLE in MYLIB/SOURCE. At this point, you have the chance to enter some text description for the source member or to resequence the statements. Then press Enter.

RPG IV is just as easy to code using SEU. SEU has prompt formats for all RPG IV specification types (plus variations). For example, a prompt format is available for the F-spec and another for each variety of F-spec (such as KRENAME). 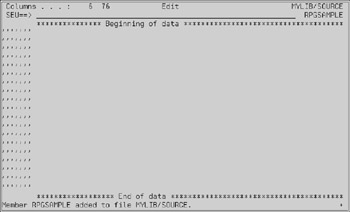 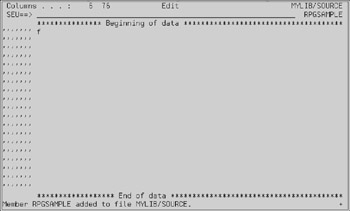 When you press F4, SEU presents the F-spec prompt at the bottom of the screen, and also shows the lines currently entered (if any) at the top, as seen in Figure 29.16. 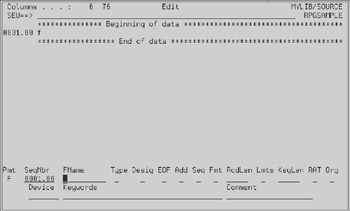 All you need to do now is fill out the input fields and press Enter. SEU will format the F-spec and log it at the top of the screen.

SEU allows you to execute numerous line commands. They will not all be listed here. You can obtain a list by pressing the Help key with the cursor located at the line-command column. The following are the most important line commands:

SEU has an input-capable line, near the top of the screen labeled "SEU===>", where you can enter special commands. No matter where your cursor is, F10 takes it to the top-line command-entry field. Once you execute a top-line command, F10 takes the cursor back to the place it came from.

Here are some top-line commands:

F13 lets you customize your SEU session. For example, you can control how much SEU advances or goes back when you press the Roll keys. Choose the Cursor setting (C). With the C setting, the Roll keys roll only enough to move the line (where the cursor is placed) on the top line or bottom line, depending on the direction of the roll. The C setting gives you complete control over the Roll keys. Figure 29.17 reflects the screen that F13 presents. 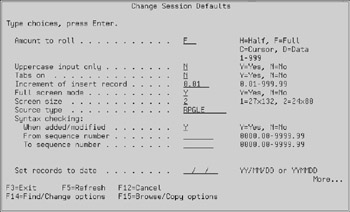 Although the F and C top-line commands let you perform some finding and changing, they don't allow as many options as F14 does. Figure 29.18 shows the screen presented by F14. 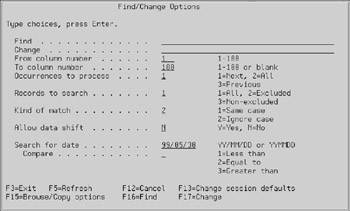 The F15 key lets you display and/or copy either another source member, a spool file, or an output queue. While you perform this function, the SEU display splits in two halves: upper (current edit session) and lower (the other item). Figure 29.19 shows what F15 presents. 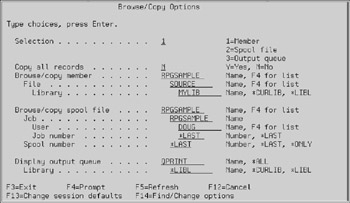