IBM no longer enhances these utilities, recommending that programmers use the PC-based WebSphere Development Server client (WDSc) instead. However, the complexity of WDSC and the fact that a large workstation is required are reasons that many programmers still use these utilities for everyday development.

The main purpose of PDM is to provide an easy interface between the programmer and the system. To reach this goal, PDM presents lists of items in typical "Work with" panels from which you can perform actions by entering options and pressing function keys.

When you execute the Start PDM (STRPDM) command, you will see the PDM main menu, which looks similar to the screen in Figure 29.1. 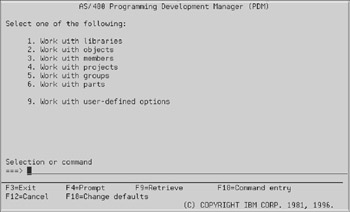 This menu illustrates the three methods you can follow to use PDM:

Options 4, 5, and 6 deal with the management of projects and will not be covered here. Option 9 is a shortcut to maintain user-defined options for PDM. PDM allows you to define your own options to make your work more productive. 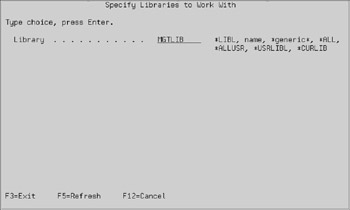 Figure 29.2: Working with the WRKLIBPDM command.

You can enter different values, depending on which libraries you want to work with:

When you press Enter, PDM follows your selection instructions and shows a list of the libraries that meet your selection criteria. Figure 29.3 offers a sample of what your system might present if you selected *ALLUSR. 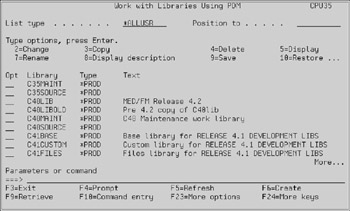 The actual libraries listed will depend, of course, on the libraries you have on your system. From this panel (the main WRKLIBPDM panel), you can do several things:

One of the options you can select on a library is 12. Option 12 starts the WRKOBJPDM command for that library and displays all the objects contained in it.

The WRKOBJPDM command lets you work with the objects contained in a library. When you run WRKOBJPDM, you can specify which objects you want to work with. If you run WRKOBJPDM manually, you can narrow down your selection by pressing F4 to invoke the command prompter. If you select option 2 from the PDM main menu, the example in Figure 29.4 appears. 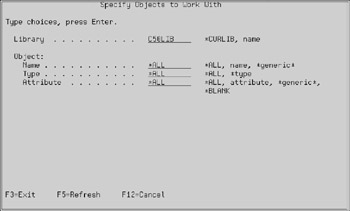 WRKOBJPDM lets you select the library, the name of the object, its type, and its attribute. In the example provided above, you would get a list of all objects (regardless of name, type, or attribute) contained in library C50LIB.

The Type input field lets you select objects by their type. You can enter a value like *PGM, *DTAQ, or any other valid object type.

The Attribute input field lets you further narrow your search. Program objects (*PGM), for example, can have different attributes depending on the language that was used to write them. Program objects, therefore, can have an attribute of CLP if CL was used, or RPG if you used RPG IV.

If you press Enter from the panel shown in Figure 29.4, PDM presents the main WRKOBJPDM panel, which looks like that presented in Figure 29.5. 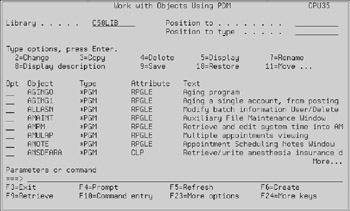 The actual items you see on the screen depends on what library you choose and what objects are in that library.

You will note that this panel is virtually a duplicate of the WRKLIBPDM main panel. This panel shows one of the strong points about PDM: its consistency of interface. The only differences are those necessitated by the fact that now you are working with objects and not with libraries. Consequently, the numbered options you can select have changed.

One of the numeric options you can select on a *FILE object is 12. Option 12 runs the WRKMBRPDM command on that file and lists all its members.

The WRKMBRPDM command lets you work with the members contained in a file. Contrary to popular belief, you can use WRKMBRPDM on either a database file or a source file. For the most part, however, you will use it on source files.

When you run WRKMBRPDM, you can specify which members you want to work with. If you run the command manually, you can narrow your selection by pressing F4 to invoke the command prompter. If you select option 3 from the PDM main menu, a panel resembling that in Figure 29.6 appears. 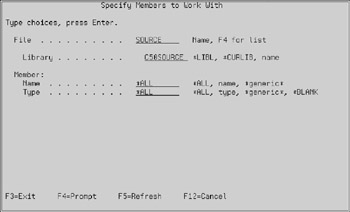 In this example, you obtain a list of all members (regardless of name or type) contained in file C50SOURCE/SOURCE. You can narrow the list by selecting members by name (usually a generic name is used because you might not remember the actual member name). You can also narrow the list by member type, such as RPGLE for RPG IV source members or DSPF for display file DDS source members.

If you don't change the values shown above, you get a list resembling that displayed in Figure 29.7. Once again, you see PDM's consistency at work. This panel has the same features you have already seen in WRKLIBPDM and WRKOBJPDM. 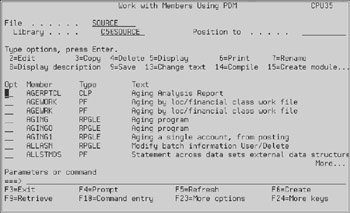 PDM is customizable. Each programmer can use it differently depending on individual needs. From any of the three main panels (WRKLIBPDM, WRKOBJPDM, or WRKMBRPDM), you can press F18 to reach the panel shown in Figure 29.8. 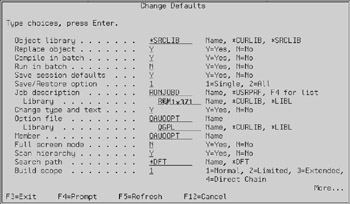 For brevity, only four input fields are explained here. You can obtain additional information by pressing the Help key or by referring to the PDM manual.