Having objects that communicate between diverse systems, such as .NET and Java, gives a developer a great deal of flexibility when developing remote objects. Someone creating a Business to Business (B2B) infrastructure can choose the technology that best fits the existing infrastructure without worrying about excluding a potential customer because of technology choice. Even though .NET and the Apache Web Service products communicate together relatively easily, you still want to engage in a great deal of testing with a customer looking for potential problems or points of failure. For instance, security under Apache Axis works differently under .NET, so you can’t jump into Web Services without knowing who your audience is and ensuring that you test your code with all appropriate consumers.

Another point to consider in this chapter is how you access Web Services. In the examples in this book, all the Web Services reside on the same machine that includes code in both Java and C#. This would not happen in a real installation because C# code would execute on a Windows server whereas Java code would be executing under Linux or UNIX. Although it is possible to configure IIS to proxy requests to Tomcat, most server-side Java implementations occur on a server with some form of UNIX. Figure 9.1 illustrates how you execute Web Services and consumers for the examples in this chapter. 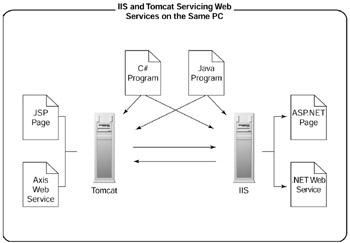 Figure 9.1: Examples in this book execute under different Web Servers but still reside on the same machine and OS. 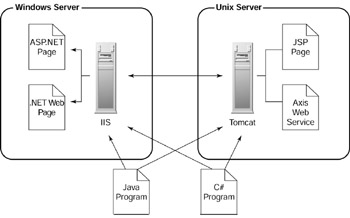 Figure 9.2: Web Services for C# and the Apache group residing on different machines where UNIX is the most likely platform for Apache products.

In this chapter, there are examples from all three platforms covered so far: .NET, Apache SOAP, and Apache Axis. Apache SOAP was the first implementation of Java Web Services by the Apache Group, and thus being in the marketplace longer than .NET there is a chance you’ll come across a legacy implementation. That’s why this chapter includes examples of integrating Apache SOAP with the other technologies. The chapter begins by introducing three Web Services that utilize the different frameworks.