Components are usually grouped for two reasons. At design time, component groups increase productivity because we can treat a group of components as a single unit. At run time, groups improve the quality of the user interface. Some container components, like TGroupBox, also improve the visual appearance of the application. For instance, the Project Options dialog box uses the TGroupBox component to group related options together. The Code generation, Syntax options, Runtime errors, and Debugging frames visible in the dialog box are TGroupBox components that contain several check boxes each (see Figure 11-20). 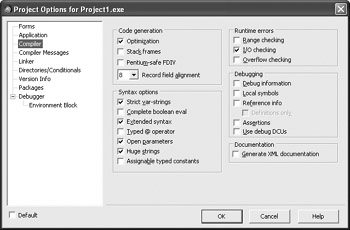 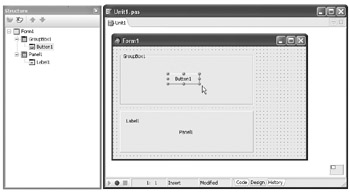 Figure 11-21: Parent-child relationships on the form

The components that you work with at design time are real object instances. When you add a component from the Tool Palette window to the Designer Surface, the IDE calls the appropriate constructor to create an object instance.

The AOwner parameter is used to define the owner of a component. The Owner component is responsible for freeing the memory occupied by the components it owns. When you design applications in the Delphi IDE, the form is automatically assigned as the owner of all components.

If you want to verify this, drop a button on the Designer Surface and write the following line in the OnClick event handler:

The Structure window provides an even easier way of moving the button to the panel — simple drag and drop. 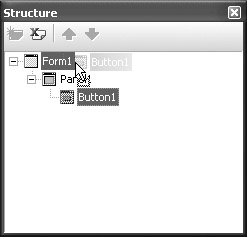 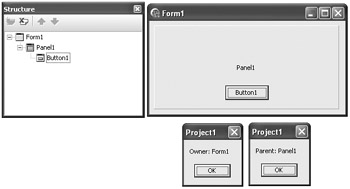 The final note about container components concerns memory usage. Container controls are really useful and irreplaceable when it comes to grouping components, but they aren't meant to be used extensively as graphical decorations on the form.