To execute a piece of code in a VCL Forms application, you have to write a response to an event. The first application we'll create displays the user-entered text on the form's title bar.

To accept user input in VCL Forms applications, you cannot use the ReadLn procedure. Instead, you have to use the TEdit component. The Text property of the TEdit component enables you to read and write text displayed in the text box.

To write a response to the OnChange event, select the Edit1 component on the Designer Surface and display the component's list of events in the Object Inspector. The OnChange event is the first event in the list. 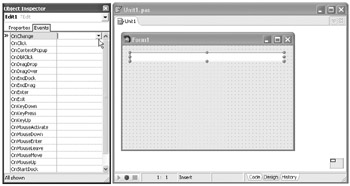 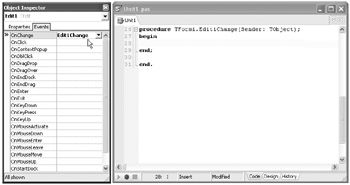 As you can see, an event handler is nothing more than a procedure. Every time the user changes the contents of the Edit component, the Edit1Change procedure is called. To copy the text from the Edit1 component, you only have to write a single line of code:

The result of the OnChange event handler is displayed in Figure 11-15. 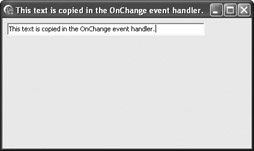 Responding to the OnClick Event

The most frequently used event is the OnClick event. The following example enables the user to reverse a string. The example uses two TEdit components for input and output and a TButton component that reverses the string in the OnClick event handler (see Figure 11-16).

Figure 11-16: The user interface of the reverse string application

When you select more components, the Object Inspector shows how many components you have selected and only displays the properties that exist in all selected components (see Figure 11-17).

To easiest way to reverse the string is to use a for-downto loop and copy characters from one TEdit component to the other. Note that this isn't the fastest way of reversing a string.

If you don't have to respond to the OnCreate event, you will probably want to remove this unwanted piece of code. Although you can, you shouldn't remove the event handler manually because Delphi automatically removes all empty event handlers when you save the file or project to disk.

Removing an event handler that contains code involves some work. For instance, let's remove the OnClick handler of the reverse string button. Again, you should refrain from removing the method implementation manually. If you do, you will break your code and will be unable to compile the application (see Figure 11-19). 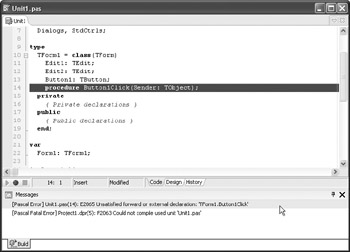 If you've removed the method implementation manually, you then have to delete the method header in the interface section of the unit. The fastest way to delete a single line of code is to place the cursor anywhere in the line you want to delete and press Ctrl+Y.

The best way to remove an event handler from the source code is to only remove the code you added to it. In the case of the reverse string button, you have to remove the declaration of the variable and the code in the method block:

When you're left with an empty event handler, you can remove the handler and all references to it by saving the project to disk.