In this next example, you're going to create an isometric grid by laying out a basic floor tile. The particular arrangement that you're going to be using is called a staggered layout.

The preceding simple script demonstrates the most important foundations of any tile-based world. We start off the code by setting up some initial constants to hold the top left coordinates of the world in stage coordinates, the dimensions of our tile movie clip and a counter to keep track of the depths of attached movie clips. We then come to the heart of the script: the nested loop that lays out the grid.

Here, we tell Flash that we want to create 31 rows. Depending on whether it is an odd- or even-numbered row, the rows have either 10 or 11 tiles in them. We do this so that if we were to mask the screen to a rectangular window (as is usually the case when the staggered layout is used), we wouldn't end up with gaps at the end of the even rows due to the horizontal offset toward the left. 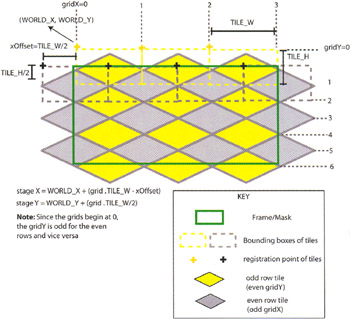 If our tiles had been regular, 2D rectangles, we could have laid them out very simply using the following code:

Basically, this means start with the origin we defined for our 3D world on the Flash stage ( WORLD_X, WORLD_Y ) and place each tile as far away from the origin horizontally as its horizontal position in the current row ( gridY ) multiplied by its width ( TILE_W ) and as far away from the origin vertically as its vertical position in the current column ( gridX ) multiplied by its height ( TILE_H ). Refer again to the preceding diagram to see this represented visually.

However, since our tiles are in fact not rectangular but are diamond-like in shape, we use the following code to lay the grid out:

To see what this looks like, test out the movie using C ontrol > Test Movie (CTRL+ENTER): 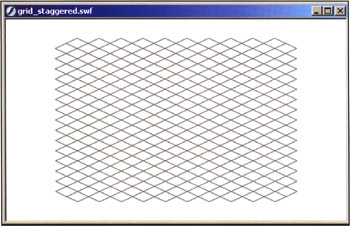 Creating a staggered isometric grid didn't do it for you? OK, so at this point you'd be forgiven for thinking that our design isn't exactly a prizewinner! But there's a reason for this: we need to cover the basics first. The isometric grid may not be much to look at, but it forms the basis on which isometric worlds are built. Carry right on to the next example, where you will create a new tile (a cube this time) and randomly attach it to your grid to create isometric cube structures. By the time you get to the end of this chapter, you'll know how to create a map-based isometric world and how to make a sprite to traverse the world using the keyboard.