Laying Out Isometric Tiles with ActionScript

Now that you know how to create a staggered isometric grid, you'll create a tile with a little more substance (or should we say, volume ). You'll expand the code to attach a new tile randomly to create dynamic isometric cube sculptures. Although you saw in the earlier example on military projection that you can lay out your isometric tiles by hand in the authoring environment, you'll now learn how to use ActionScript to do this, and how this dynamic technique gives you far greater freedom. Eventually it will allow you to create worlds that you can move around in. Here you're going to see how to lay out an isometric world using ActionScript. Along the way, we touch upon the subject of z-ordering as it pertains to isometric tiles. 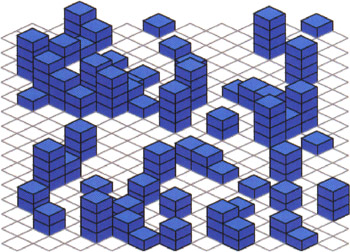 In this example, you created a staggered isometric layout and dynamically populated it with some cube-shaped tiles. You did not make the heights of the cubes equal to or a multiple of the height of the floor tile on purpose to escape from the rigidity of the grid.

Going forward, instead of creating random blocks, wouldn't it be nice if you could have various types of tiles and create your worlds based on maps? That's exactly what you're going to do in the next example, where you'll see the more common layout model for isometric maps: the diamond-shaped or rotated model. You'll also see how you can use a tile map to create your worlds with precisely placed tiles.