Chapter 3: Motherboards and Their Components

Motherboard (Main Board, System Board, Desktop Board) Overview

The motherboard is the part of the computer to which every other component is connected. It contains the processor socket(s), memory slots, expansion card slots, ports for mouse, keyboard, printer, et cetera, and electronic parts, known as the chipset, to make everything run. Most motherboards contain some built-in components such as video, sound, network adapter, and others, and they therefore have ports for whatever built-in components they have. For example, if a motherboard has built-in sound, it will have built-in audio connectors as well.

Since the first PC was introduced, several types of motherboards have been used; the types referred to as form factors. What differentiates form factors of motherboards is their size, arrangement of components on the boards, and other details. Cases and power supplies are also classified into the same form factors; they all have to match to some extent for the components to fit properly into the case. The following form factors of motherboards are among those that have been used for PCs: AT, ATX, LPX, Micro ATX, NLX, and Flex ATX, in addition to proprietary boards by Dell, Compaq, Gateway, Hewlett-Packard, IBM, and others. Newer proprietary boards are based on the aforementioned standards, so some substitution is possible. Many sites on the Web explain the differences among form factors, such as motherboards.org and formfactors.org. Search Google.com for "motherboard form factors."

It is important for technicians to be able to identify the parts of any motherboard. Figure 3.1 shows an ATX motherboard. 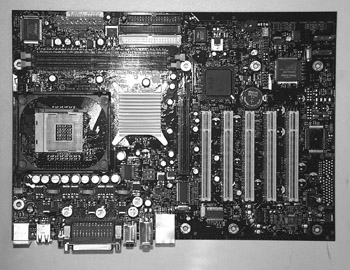 While there are wide differences among the various brands and form factors, all motherboards have certain components in common:

CPU slot/socket: We discuss CPUs in detail later in this chapter.

Memory slots: Physical configurations of memory chips have changed over the years, but the industry seems to have settled on dual inline memory modules (DIMMs). These chips have 72 or more pins per side, although the two sides are so close to each other that it is not readily apparent that there are two sets of pins. Memory slots can accept one type of memory chip. Board design further limits the compatible memory chips. See Chapter 5, "Memory (RAM)," for more information on memory. Figure 3.2 shows DIMM slots. 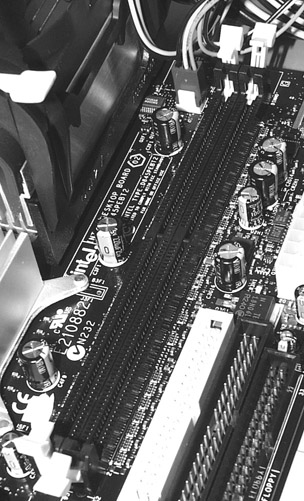 BIOS chip: We discuss BIOS chips in greater detail later in this chapter.

Chipset: Every motherboard has a number of integrated circuits (chips or ICs) permanently installed on different parts of the board. Each chip has a separate function. It is most common for these chips to all be from a single manufacturer. You might see ASUS® brand motherboards, for example, with chipsets from Intel® or Via. Some companies such as Intel make their own motherboards in addition to chipsets for competitors' products. Manufacturers such as these virtually always use their own chipsets in their motherboards.

AGP slot: All motherboards made in the last several years that don't have built-in video, and some that do, have an accelerated graphics port (AGP) slot. This is the slot for a video adapter. Figure 3.3 shows an AGP slot. See Chapter 8, "Video, Sound, Modems, and Network Adapters," for more information on video adapters.

Expansion slots (ISA and PCI): Expansion devices in card form, such as modems and network adapters, go into these slots. Newer motherboards have only Peripheral Component Interconnect (PCI) slots, while some middle-aged boards have a combination of PCI and the older Industry Standard Architecture (ISA) slots. Some boards have expansion slots that give a choice between the two, as shown in Figure 3.5. In this case, ISA cards have to be inserted upside down (with the soldered-on components facing the bottom of the computer) as compared to PCI cards. As you can see in Figure 3.6, ISA slots are often dark colored, and PCI slots are usually white or off-white. The cards are also easy to differentiate; compared with ISA pins, PCI pins are much smaller and closer together, as shown in Figure 3.6. This is important, as the slots can accept only cards of the same type. 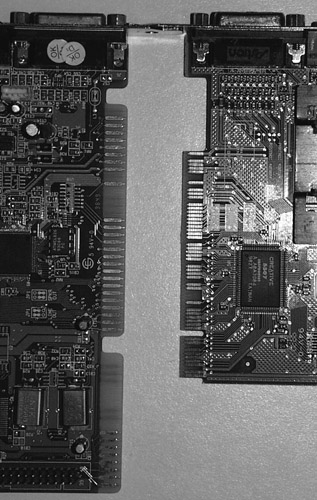 PCI slot and card standards are constantly being reviewed and updated. Several new versions of PCI slots are out or coming out soon. Low Profile PCI devices, for example, are designed to fit in newer small computers. The first iterations of these cards will fit in the original PCI slots, but future versions might not. Also changing is the cards' operating voltage. Newer devices are running at 3.3 volts rather than the older standard 5 volts. Moreover, 64-bit computers are available, although very expensive as of this writing, and there are necessarily 64-bit PCI cards to fit them. All of these new standards will be important to keep up with, as compatibility between cards and slots will become more of an issue. For more information on the PCI standards, see pcisig.com/news_room/faqs.

See the video "Removal and Replacement of Expansion Cards" on the accompanying CD-ROM for more information. The filename is

Power connectors: Every motherboard has power connectors that look something like the one shown in Figure 3.7. Those of you who have taken A+ courses might know this as P-8 and P-9, although the actual designations vary from board to board. Some newer boards have a 12-volt connector like the one in Figure 3.8. The one in Figure 3.8 must be connected to the proper connector on the power supply for the motherboard to receive power. If the board has a 12-volt connector, it must be connected to the power supply to avoid damage to the board. 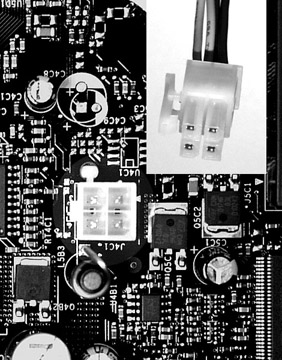 Figure 3.8: If the motherboard has this 12-volt connector, it must be connected. The connector from the power supply is in the inset.

Note that an AT (form factor) motherboard power connector is different from an ATX connector. The AT connector has two parts, each with black wires on one end. They must be installed with the black wires next to each other at the center of the motherboard's connector, as shown in Figure 3.9. 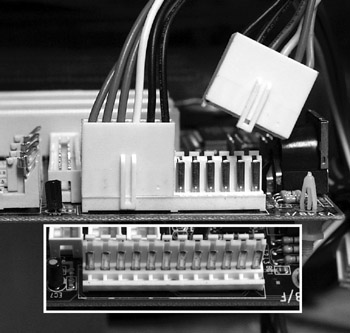 Battery: We discuss the motherboard battery later in this chapter.

Disk drive connectors: Virtually every motherboard has two IDE connectors for up to four IDE devices, usually one or two hard drives and one or two optical (CD or DVD) drives. With the proper cables, each connector can support two drives. In addition, there is a connector for the floppy drive. See Chapter 6, "Magnetic Disk Drives," and Chapter 7, "CD and DVD Drives," for more information on disk drives. Figure 3.10 shows IDE connectors. 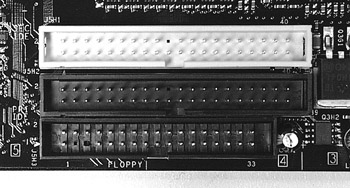 Header connectors: These are multi-pin connectors that are similar to but smaller than the disk drive connectors for ports such as serial, parallel, USB, audio, case speaker, and so forth. If you can't locate the connection instructions on a sticker on the board or in the case, refer to the motherboard documentation in hard-copy form or on the manufacturer's Web site.

Ports: Motherboards have some or all of the following ports: serial, parallel, game, PS/2 mouse, PS/2 or AT keyboard, and USB. We discuss these later in this chapter.

While many motherboards are easily identifiable, a few aren't. Here are some identification methods:

While the chipset manufacturer can make a difference in the quality of a motherboard, the manufacturer of the board itself makes the most difference. To select the best, most appropriate board, first decide on the features the user needs such as type and number of expansion slots plus the needed built-in components. Also note that motherboards take only one type of memory. Generally, the faster the memory, the more expensive it is. Therefore, decide on the best memory you can afford and select the motherboard accordingly. See Chapter 4, "Cases and Power Supplies," for more information on memory.

Just about all motherboards these days have some built-in components that were available only on expansion cards on earlier PCs. The most common of these are video, sound, network adapters, and modems. It is easy to tell when a board has these systems built in—just look for the appropriate connectors. If the computer is fully assembled, look at the back to determine the functions that are built in. The computer shown in Figure 3.11, for example, has built-in video and sound. This is apparent because these connectors are closer to the top of the computer. Other connectors are lower down, in the stack of expansion cards. By the way, the shiny metal plate surrounding the ports for the built-in components is called the I/O shield. Although this comes with a new motherboard, we'll cover this in Chapter 4. 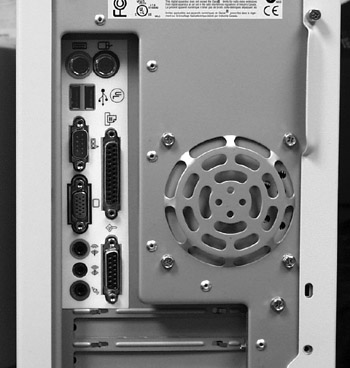 Figure 3.11: A computer with built-in sound and video.

Certain instances call for replacement of a built-in component, usually when that component fails or when the user desires a better component or one with more features. It is practically impossible to replace the individual parts on the motherboard, so the answer is to add an expansion card with the desired function. For example, if the built-in video system becomes troublesome, you can add a PCI or AGP video card. On some boards, you can add a video card and still use the built-in video in order to use two monitors. In the case of a sound card especially, if you add one you should go into the BIOS setup program (see Chapter 2, "System Configuration and Computer Hygiene") and disable the built-in sound device to prevent any conflicts.

Some motherboards have modems that are not quite built in. You will see a slot that appears to be a very short PCI slot with a small modem attached. The slot is called a modem riser. The modem will not work on any non-identical motherboards. Replace a bad modem of this type by removing the card and installing a new modem in an unused expansion slot.