Starting in Mac OS X 10.2, Apple has built the CUPS (Common Unix Printing System) into the operating system. CUPS uses the IPP (Internet Printing Protocol) to access and provide access to printers across TCP/IP networks. IPP uses HTTP 1.1 as its transport protocol (See RFC 2568 for details: http://www.ietf.org/rfc/rfc2568.txt) and, in fact, is configured very much like the Apache server in Chapter 15, "Web Server Security." Basic printer management is handled either through the Mac OS X Print Center, or via the CUPS internal Web server, accessible by pointing your browser to http://127.0.0.1:631.

In Mac OS X, CUPS is simply referred to within Mac OS X as "Printer Sharing," and like the other services that we've seen, is activated by clicking the Printer Sharing button within the Sharing System Preferences panel, as shown in Figure 16.7.

Figure 16.7. Printer sharing ”sounds great. Now what did I just do? 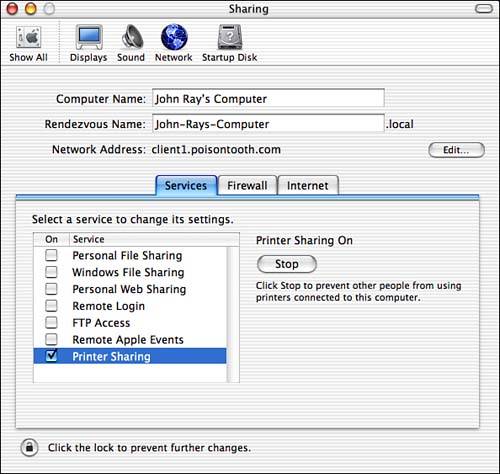 As you've seen with other Mac OS X servers, clicking a little button sometimes has implications greater than what the user expects. Who, for example, are you sharing the printer to ? We'll get to this, and information on how you can fine-tune printer access, shortly. First, the dirt on CUPS.

Like any Internet-connected service, CUPS is prone to remote exploits. Because of its resource-sharing nature, denial of service attacks are what you are most likely to encounter if you use the service. The following five potential attack points are taken from the CUPS security reference (http://127.0.0.1:631/ssr.html):

Unfortunately, no mechanisms in place within CUPS or IPP can stop these attacks. The MaxClients (and related ) directives can help stave off unreasonable numbers of connections, whereas MaxRequestSize can be used to keep abnormally large requests from being sent to the CUPS server.

Since the introduction of Mac OS X 10.2, there have been several vulnerabilities in the Apple CUPS distribution and a number of operating system updates to fix them.

In Mac OS X 10.2.2, a DoS attack via Web Administration (CVE: CAN-2002-1267) was corrected. The Apple-supplied version of CUPS shipped with port 631 open to machines other than localhost. This resulted in a potential for remote users to access the port and caused a denial of service condition.

The subsequent release of Mac OS X 10.2.3 included a patched version of CUPS that addressed a collection of vulnerabilities submitted as a collection in mid-October 2002.

These vulnerabilities enable an attacker to crash the CUPS daemon by providing a negative content length in the HTTP headers:

Other attacks allow remote users to add printers by sending properly formatted UDP packets, execute arbitrary code, and gain root privileges. These issues were promptly fixed in CUPS 1.1.18, and included in Apple's 10.2.3 distribution. Users of earlier versions were advised to update CUPS or disable it completely. The original report of these exploits, along with examples, is provided at http://marc.theaimsgroup.com/?l=bugtraq&m=104032149026670&w=2.

Apple's Printer Sharing controls do nothing more than toggle a few directives within the CUPS settings and restart the server process. The Mac OS X CUPS configuration files are stored in the /etc/cups directory. You need to be concerned with three primary config files:

Printers and classes are defined virtually identically to Apache containers. Please refer to Chapter 15 if you find this confusing.

A printer, as defined in /etc/cups/printers.conf , for example, looks like this:

MyPrinter is defined, along with attributes for quotas, active status, and so on.

The /etc/cups/classes.conf file is very similar:

The class OurPrinters looks exactly like a printer, with the addition of the Printer directives, which add the printers MyPrinter and YourPrinter to the class. Like a printer, a class of printers can also have access control mechanisms to limit usage.

For example, to set up a location that can be used to control access to the printer MyPrinter , one would use

Within the location, use the directives in Table 16.9 to protect the printers, printer classes, or any of the CUPS locations. Some directives apply globally to the server, rather than a single location.

Table 16.9. Directives to Limit Access to the CUPS Locations

The complete list of CUPS security (and general) directives can be found at http://www.cups.org/sam.html.

When using digest authentication, you must manually add users to the CUPS passwd.md5 file by using the command-line tool lppasswd . The lppasswd syntax is simply lppasswd [-a] [-g <groupname> ] [-x] [username] .

The most common use of the command for an administrator is lppasswd followed by -a and a username. Doing so adds a username to the MD5 password file. If the -g flag is used with a group name, the user is added as a member of the named group. If no group is specified, the default system group is used. For example:

If specified without a username, lppasswd changes the MD5 password of the user executing the command.

To delete an existing user from the file, use -x <username> as the arguments to lppasswd .